China wants to make gloves, not war. It means business, nothing more. 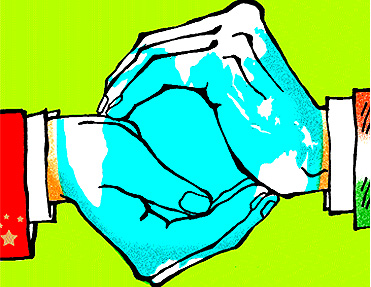 outlookindia.com
-0001-11-30T00:00:00+0553
"One mountain (allows for only) one tiger," warns the old Chinese proverb. It's a shame the ancient sage didn't copyright it, for the phrase has been recycled mercilessly over the years to describe the ebb and flow of geo-politics between the so-called Asian Tigers. This week, it was trotted out for China and the new big cat on the block, India, which came calling in the form of Prime Minister Manmohan Singh.

The state-controlled China Daily said the Indian premier's visit would be a "pivot on which the dragon and the elephant will dance more closely on the global arena". A tortuous enough metaphor made all the more uncomfortable for the PM—who has only just stopped worrying about his government collapsing under its own weight and could probably do without having to prop up anything else. In the end, the trip was a back-breakingly dull affair.

Which begs the question: why bother having a summit at all? That was answered by Indian foreign secretary Shiv Shankar Menon. He told the increasingly soporific press pack that the fact that the two nations were skirting around all the thorny issues and getting on with business showed a "maturity in the relationship". Maturity is not a word that used to spring to mind when contemplating Indian foreign policy. These days, though, South Block has a more grown-up feel about it, helped by the fact that the foreign affairs portfolio is no longer given to the least sensible member of the Union cabinet. India has now recognised that love them or hate them, but you can't build your economy without the Chinese in today's world. India is 15 years behind Beijing and needs to start catching up if it is to fulfill any global ambitions. That means turning a blind eye to Chinese snootiness and getting on with the business of making money.

And that suits the Chinese because they can't afford an angry neighbour on their border. They want to keep filling the world's shops with their cheaply produced goods to keep their economy hurtling along. The Chinese want to make gloves, not war. They need people busy at work making anything and everything because they don't want a generation of discontented youth agitating on the streets.

So, what did the Chinese want from this week's meeting? Apologies to all those lovers of Clausewitz; but the best way to describe China's foreign policy is 'shopping by other means'. China's relationship with most countries around the world boils down to two key questions. 'What can we buy?' and 'What can we sell?' China does not want to project its values around the world. It doesn't pretend to strive for an ethical foreign policy. It will stand proudly with the international community; or sit down quietly with the world's rogue nations, depending on its own business needs and nothing else. It needs raw materials to make things; it needs markets to sell them. India potentially offers both. The Indians talked about the "personal warmth" between their PM and his Chinese counterpart, Wen Jiabao. The Chinese talked about a new "trust". Both sides announced a shared vision. None of the journalists could work out what the story was. And as any diplomat will tell you, from their perspective, that means the summit was a success.

But where does it leave Sino-Indian relations? Is personal warmth driving things? Well, maybe. The two leaders do have a few things in common. Both share a common interest in the finer details of economic management; neither was elected to his present post by popular mandate.

Is there great trust? No, there is not. Privately, Indian diplomats will tell you they pay little heed to what the Chinese say about them publicly because behind closed doors they believe the Chinese are disparaging about India's global ambitions. Do they have a shared vision? No, but they do have shared interests. Both have an ambitious middle class. Both want to get on with building up their economies and infrastructure. Both have finally realised there's little point beating the war drums while millions are waving a begging bowl.

In his final speech, the Indian premier said the world was big enough for both China and India to grow. At the subsequent Chinese foreign affairs briefing, a spokeswoman said China "applauded" that statement. There may come a time when the two nations will regress to their old ways and start making these summits a bit more exciting. Till then, I suspect, we hacks are in for some not very interesting times.

(Paul Danahar is the BBC's Asia Bureau chief, based in Beijing. He was earlier posted in India.)

The Chinese Red Is Fine, But Ours Is A Deeper Hue