An angry Mayawati will upset some BJP calculations, but the Congress may not be an unqualified beneficiary 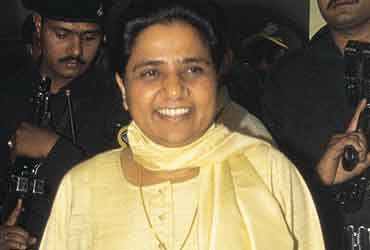 outlookindia.com
-0001-11-30T00:00:00+0553
Will the BJP's old ally turn out to be its Achilles heel? Strategists in the BJP now reflect, with a hint of wistfulness, on a three-month-old script that will probably never play itself out. Their daydreams, of Mayawati addressing an election rally in Bhopal not as a political opponent but as an ally, may be condemned to remain lodged in the realm of imagination. They fantasise that Mayawati, like in the Gujarat elections, would have polarised the tribals and backwards their way, making the saffron political arithmetic easy.

But the reality is soberingly different. For, the "Dalit ki beti"—who quit as UP CM and severed ties with the BJP three months ago—is now hell-bent on upsetting all the calculations her former alliance partner had so carefully worked out in the four major states where assembly elections are due. Mayawati has been very categoric: "We have asked our supporters to vote against the BJP. In seats that we are not contesting, we'll support candidates who are in a position to defeat the BJP."

This is music for the two Congress chief ministers of Madhya Pradesh and Chhattisgarh, battling as they are that abstract but dreaded demon called anti-incumbency. A joint Mayawati-BJP campaign would have seriously damaged Congress prospects, particularly in these two states where the BSP had won 11 seats in the 1998 assembly elections and secured the second spot in more than a dozen constituencies. But now, with the BSP "pledging to defeat the BJP", relief has arrived for the two chief ministers who are fighting with their backs to the wall. However, in Rajasthan and Delhi, where the Congress says it might make overall gains because of Mayawati's anti-BJP stand, there is the apprehension that the BSP may actually cut into the Congress' Dalit votes in constituencies where it is contesting.

But in Madhya Pradesh, the BSP is only too welcome an interloper. "I am glad Mayawatiji has realised who her true enemy is," says chief minister Digvijay Singh, seeking a third term in office this year. Although Diggy Raja is one of the few Congress leaders who was of the view that the party would not derive any long-term benefits from an open alliance with the BSP, he's experienced enough to clutch on to whatever straws Mayawati is offering. The Congress won the 1998 election by polling 40.59 per cent votes while the BJP was a close second with 39.28 per cent. So, the BSP, with its voteshare of over 6 per cent, is a crucial, though unspoken, Congress ally in MP.

In large pockets of Chhattisgarh, a state with a predominantly tribal population, the BSP wields considerable influence. Of the 11 constituencies in the united Madhya Pradesh from where the BSP won in 1998, seven are now in Chhattisgarh. Chhattisgarh chief minister Ajit Jogi is only too aware of Mayawati's hold over the tribal and Dalit pockets. He has been trying none too clandestinely to woo Behenji ever since her big break from the BJP. "Mayawatiji and I are being victimised because I am a tribal and she is a Dalit," Jogi said immediately after the cbi raided Mayawati's residence in Delhi.

The BJP, on the face of it, claims it does not ascribe too much importance to the "BSP factor". Most central leaders dismiss the BSP's hostile campaign against the BJP as "too inconsequential" to hamper the party's prospects. "The only place where the BSP could have made some difference was Madhya Pradesh. Even there, the party is split with local leaders vowing to work against Mayawati. The same is true for Chhattisgarh," points out a senior rss office-bearer.

The state units of the BJP echo this assessment. BJP's MP unit president Kailash Joshi told Outlook: "The BSP depended on Phool Singh Bharaiya in MP. He has now formed the Samata Samaj Party. This is going to split the BSP vote.We are winning there regardless of Mayawati."

Despite such nonchalance, all hell broke loose in the BJP's Rajasthan unit when the BSP released its list of 125 candidates. The BSP in-charge for the state, Shambhu Dayal, announced the party would not be fielding candidates in the remaining 75 constituencies. This led the chief spokesperson of the Rajasthan unit of BJP, Kali Charan Saraf, to accuse the Congress of "striking a deal" with the BSP.

Though Mayawati's anti-BJP posturing may help the Congress in Rajasthan, many local Congressmen are worried. With the BSP in fray, they fear further fragmentation along caste lines. (The caste situation in Rajasthan is already charged, what with the BJP and the Congress courting the Rajputs for the past some time by dangling the carrot of reservation before them.) While the Dalits are expected to rally around Mayawati, the Jats have renewed their demands for further reservation. They had overwhelmingly supported the Congress in the last elections, but the community, by and large, is disappointed with the party. In such a situation, the pressure from the BSP, which has fielded candidates in almost all districts barring Jaisalmer, will definitely be felt.

In 1998, the BSP had contested 108 seats in Rajasthan and won from two seats with a total vote percentage of 2.17. Two of the mlas who emerged victorious then are not with the BSP any more. One of them, Jagat Singh Dayma, passed away and the other, Mohammed Mahir Azad, has joined the Congress. While the BSP is not likely to improve on its earlier position, the party's influence in the districts adjoining UP and northern MP, and in other Dalit pockets is expected to tell on the final outcome.

In fact, both in Rajasthan and Delhi the Congress would like the polls to be focused on issues like development and management of drought rather than caste. "I'm very clear about what I am going to go to people with—development, better healthcare, improvement of infrastructure, water and power. If health and education improve, the situation of all oppressed classes will improve. I don't think playing caste politics is the key to bettering the lot of the Dalits," says Delhi chief minister Sheila Dikshit.

Despite such lofty ideals, the Congress is not above playing caste politics. The appointment of Prem Singh, a Dalit, as dpcc chief, is a recognition that the Dalit factor could be crucial in the elections. But with Mayawati fielding candidates in 40 of the total 70 seats in Delhi, some Congress calculations might be upset.

Still, the Congress is jubilant because Mayawati is openly attacking the BJP. An enemy's enemy is a friend after all.