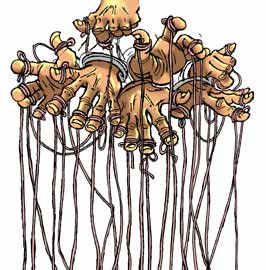 Right in the middle of an "unofficial" interview, Nand Kishore Singh will suddenly pause. He will then rewind his arguments mentally, play it back a bit and then in a sudden burst of excitement exclaim: "That's a great line... write it down." The officer on special duty (osd) for economic affairs at the pmo relishes every opportunity to dictate your story much in the same way he loves to dictate the government.

Or take Brajesh Mishra, the PM's overbearing principal secretary and national security advisor, through whose roving eyes, it seems, Vajpayee charts out his national agenda of governance. He loves the media, zooms around the world on his own and basks in perennial limelight. This man just hates to serve.

The PMO is the prime minister's secretariat and bureaucrats, ideally, the backroom boys. But over time and under successive prime ministers, beginning with Indira Gandhi, the pmo seems to have become the nucleus of government policy-making and even implementation. Simply put, the pmo is behaving like it's the PM.

"From 1947 to 1980, how many times has the pmo's reference cropped up in the media? Everything was the PM's decision. Now it's just the reverse. What business does the pmo have shooting off a letter to Mamata Banerjee?" questions an irate former pmo official.

How then should the PMO function, what exactly is its role? Should the pmo bend or dictate policies? These questions have suddenly become unusually pertinent. Outlook spoke to a host of current and retired top bureaucrats to find the answers.

The real task of the pmo, feels a former pmo official, is to provide all necessary assistance to the PM in his capacity as the executive head of the government. The work would fall in certain well-defined spheres such as guidance in new policies, monitoring them and overall coordination. In strict officialese, it would include "assembling ideas, collection of relevant inputs from diverse sources, formulation of issues and working out alternatives regarding matters coming up to the PM for decision".

To quote P.N. Dhar, former special secretary to Indira Gandhi: "A political party expresses its macro policy preferences during elections via its manifesto but it is the PM's task to convert them into hard policies and implement them through the administration. It is here that the PM's office plays a crucial though intangible role." The pmo is only a transmission belt for ideas which constitute a part of the inputs which go into policy formulations. "The PM's agenda is the pmo's agenda. The rules of business clarify that only the Cabinet is the final authority of policy-making, not the pmo," adds a powerful principal secretary of the '90s.

But reality now speaks another lingo. It is becoming clear that pmo officials are forcing key economic policy decisions on ministries through either the poorly represented group of ministers (GoM) or via countless committees which work mostly at their behest. The examples are countless—the Hirma power project counter-guarantee issue, sweeping telecom reforms, clearance to the Oman fertiliser project; petrochem reforms, the national highway project etc.

Since the PMO is manoeuvring cabinet decisions and has reduced most wings of the government to mere implementing organs, should we—as has already been mooted—then disband the pmo? After all, an ex-pmo top brass admits that if the pmo curbs initiatives or lowers morale elsewhere, then it actually weakens the PM's hands.

"That will be a typical boyscout judgement," lambasts former foreign secretary J.N. Dixit. "The government's workload has soared and you do need a very senior bureaucrat (either retired or just about to) as principal secretary so that the other 'seniors' don't feel humiliated." Moreover, he observes that key policy decisions originate from the cabinet and no principal secretary can overturn it. "The osd and the principal secretary may have greater access to the PM but that's purely an occupational hazard. If the PM wants to accept the pmo's recommendations, it's his problem. Targeting only senior bureaucrats for that is simply not valid."

Agrees another official wholeheartedly: "Civil service is the only permanent part of the government. Chuck the pmo and let the ministers twiddle their thumbs. Do you think the present lot can formulate policy decisions on their own?" The voice of dissent multiplies as yet another pmo member chips in to say that the PM is the head of the executive and because of his apex position, he requires specialised help. If each minister can have his own office, then the PM—sitting at the top—must have a bigger one.

Says constitutional expert Subhash Kashyap: "Those who cite Article 77(3) of the Indian Constitution to harp on the 'extra-constitutional' role of the pmo may also oppose the cabinet secretary's power since even that does not have any reference in the Constitution. They are purely administrative arrangements."

The collective bottomline: the style of the pmo's functioning depends on the PM's style of functioning and its character reflects that of its boss. "The PM gets the inputs from his office. So, the pmo top brass can influence him to the extent a minister or a cabinet secretary can, but the final choice is certainly his," claims G. Parthasarathy, who was a spokesman in Rajiv Gandhi's pmo. "A civil servant is as influential as the PM wants him to be."

That's precisely the root of the problem. Vajpayee's health appears to be in the twilight zone, which may have led him to rely increasingly on his two lieutenants—Brajesh Mishra and N.K. Singh—in whom he seems to have unshakable faith.

Many observers allege that the duo has abused the temperament of a laidback and contemplative premier to the hilt and has appropriated his public role completely. "What started off as merely checking a few files has now gathered momentum. It is a classic case of you-give-them-an-inch-and-they-take-a-mile syndrome where one begins with mere coordination but ends up running the whole show," feels a highly-placed Planning Commission official. He feels that this pmo is following a legacy started by Indira Gandhi when the principal secretary began overshadowing the cabinet secretary. "We have moved away from the true spirit of the cabinet form of governance to a prime ministerial system, and in such a case a superpowerful pmo is inevitable."

The compulsions of coalition politics also play their part. With the proliferation of ministries and babus, direct coordination by the PM has become impossible and his reliance on his office naturally increases. "Someone has to manage the jumbo cabinet with all its conflicting interests and new ministers and the pmo has to step in," says H.Y. Sharada Prasad, who was Indira Gandhi's information advisor. Cut the cabinet flab and it will automatically slash the pmo's grandeur. But, says a former official, once Vajpayee gave key assignments to inept ministers, there was no way he could get work done without a strong and aggressive pmo.

Senior bureaucrats also blame the system for this balance-of-power crisis. "When you have such a system where Parliament is a fishmarket and officials get lakhs for just a yes or a no, then such grime is bound to mar the machinery," says one. The only way to cleanse the system is a reforms blitzkrieg. We have only done peripheral reforms which are a safe bet and have avoided the controversial ones. Unfortunately, what is economically rational often looks politically unfeasible. But the government must be committed enough to create a consensus and push through its reforms. And then, inevitably, along with all forms of babudom, the pmo shall also fade away.# n