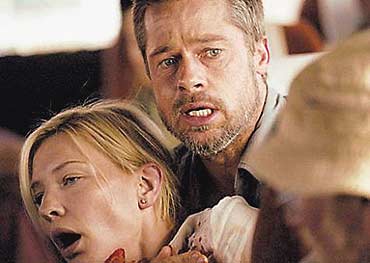 In Babel, Alejandro Gonzalez Inarritu brings together multiple characters, locations and lingos, all on to one canvas. As the complex, textured, moody and languorous narrative moves from one story to the next, it shows how diverse destinies can get intertwined. Sometimes by a rifle.

The Biblical echoes about the Tower of Babel are all too loud and clear. God created linguistic confusion to prevent mankind from aspiring to heaven. That chaos and conflict continue to reign supreme.

Babel takes us through four stories—a Moroccon family acquiring a gun to keep jackals away from their cattle, an American tourist getting shot on a bus ride through Morocco, a nanny taking her American employer’s kids to Mexico for her son’s wedding and a deaf and mute Japanese teenager unable to communicate with her father after her mother’s suicide. All these tales are about frail relationships marked by violence, overt and underlying. Even happy situations inexorably move towards tragedy in a fractured world united in grief.

Inarritu’s politics is understated but not invisible. One can sense that his sympathies lie with the Third World, whether it’s the Mexican nanny who is deported by the heartless American officialdom or the generous Moroccan villagers who help American tourists when their own First World fellow travellers ditch them. It’s not Pitt, Blanchett, not even the charismatic Bernal who walk away with the acting honours, but some unknown faces from Morocco and the young Japanese actress who move you profoundly. Ultimately, it’s the landscape that towers over the people. The cinematography is brilliant and the camera moves fluidly from stark and arid Morocco to colourful Mexican streets and on to the ubermodern cityscape of Japan. The soundtrack is as inspired. There are moments when a lot is left unsaid. There’s a remarkable stillness and delicacy as the music and images interplay and do all the talking. My favourite scenes: the energetic and joyous vignettes of the Mexican wedding or the hypnotic, hallucinatory night life of Tokyo experienced through the haze of drugs.


Hollywood
1. Night at the Museum
2. The Pursuit of Happyness
3. Children of Men
4. Freedom Writers
5. Dreamgirls