It was a war of unequals: rusty Soviet-era T-72s vs stealth fighters. The fall of Kabul was a walkover. 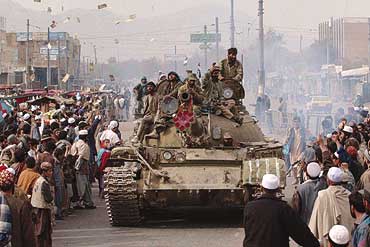 outlookindia.com
-0001-11-30T00:00:00+0553
From a distance, you tend to feel the bombing-run from an American B-52 rather than hear it. First comes the colossal eruption of flame and smoke. Vast plumes spurt up from the ground, turning into solid mushrooms of dust that rise over the barren Afghan battlefields. Then comes the earthquake: the ground shudders as the shockwave rips through the rocky terrain. A few seconds later, the rumble. It’s so deep that you feel it in your very core, like the base-beat that makes your stomach pulsate when you’re next to the speakers at a rock concert. And finally, there’s the inevitable thought that nobody sitting under such a powerful blast could ever hope to survive; or if by some miracle they did, they could ever think of fighting on.

I watched numerous bombing waves from a ridge overlooking the Amu Darya river that runs along Afghanistan’s northern border with Tajikistan and Uzbekistan. It was towards the end of last October, as the anti-Taliban coalition (read the Americans) stepped up the air campaign in support of the Northern Alliance (NA) forces. The hill-top was a natural frontier that protected the troops loyal to the former president Burhanuddin Rabbani and his military commanders from the Taliban. But the defensive positions also boxed them into a relatively narrow wedge of territory in the north-east of the country.

The northern border region is a barren place. Flat, hot and very, very dusty. Through the alliance commander’s binoculars, I had an unobstructed view of the cracks in the desert several kilometres away. Those were the Taliban trenches. At first, the Americans tried "carefully targeted air strikes". To the alliance troops engaged on the frontlines, these were little more than pinpricks that only annoyed the Taliban. The solution was carpet-bombing—the old Vietnam-era tactic of flying a B-52 with a belly-full of bombs, and dropping them in vast lines along the trenches. The sight of the ground opening up, belching vast fissures of fire and fumes, was terrifying to watch, let alone endure.

Indeed, when the Americans became involved from the air, it turned into a war of unequals: rusting Soviet-era T-72 tanks, rocket launchers and Kalashnikovs versus laser-guided bombs, stealth fighters and hell-fire missiles. Before the fighting truly began, there was much talk outside Afghanistan of a desultory campaign, and lots of discussion afterwards about the sudden collapse of the Taliban. But to witness the technological gulf was to understand that those at the receiving end of the American fire had no choice at all.

There were also snide comments about the wave of Taliban defections that followed the collapse of the northern city of Mazar-e-Sharif. General Abdul Rashid Dostum led his troops back into his old stronghold in a savage route, and the districts began falling in a wave of dominoes as the local Taliban recognised they’d been beaten.

But that was to completely misunderstand the nature of Afghanistan’s civil war. Afghans have always been fiercely independent—their loyalties lie first with their own family, second with their village, followed by the district and then the nation as a whole. So if they see that their local interests are best served by swapping sides, so be it. "There’s nothing disloyal," declared a former Taliban commander I knew from years ago and who was now leading an NA advance on Kabul. "My village knows this is now the best way for us all."

It was feared that the fight for Kabul would be different. That somehow the Taliban would rally its most loyal troops, including the foreign Al Qaeda fighters, in a bloody stand to defend the capital. On November 12 afternoon, we sat on the roof of a building with a radio and binoculars. An NA commander pointed out the line of trees in the distance that marked the road to Kabul, and the Taliban bunkers. In the fading afternoon light, incoming shells exploded in flashes of orange behind NA positions. Then, seconds later, another demonstration of American firepower. A sharp eruption of flame, the now-familiar rumble, and another Taliban bunker gone.

At 4 o’clock the next morning (November 13), we were woken by a frantic commander. The advance was on, he told us. It was time to move. In the grey dawn, huge craters dotted the fields where the frontline trenches had been. Command posts burst open, splintered into match-wood. Taliban corpses littered the roadside; a bloodied turban on one body the only way of working out where the head once belonged.

It was, quite literally, a walkover. The NA drove to the gates of Kabul meeting almost no resistance at all, and there their commanders halted the troops. Fearing looting that so often follows Afghan military victories, the commanders hand-picked squads of trusted fighters to clear out any pockets of resistance and secure the city.

What they found there was a street party. Kabul residents came out blinking in the sunlight, at first hardly daring to believe that their city had changed hands with so little bloodshed, and then celebrating with the kind of wild enthusiasm that they’d been forced to suppress during the six years of Taliban rule. People laughed, throwing flowers at the newcomers. They danced and cheered and shouted. Men queued up at barber shops to get their beards shaved off; children flew kites; one man with a gun waved our vehicle down, leaned in through the window and demanded we turn up the stereo, loud.

This was Afghanistan rediscovering a lost exuberance. The Afghanistan of the Taliban was an aberration born of a need to impose order and discipline in a country where all sense of control had been lost. The Afghans are, in truth, amongst the most tolerant people I have ever encountered. Theirs is a deeply conservative society, but they share a generosity of spirit and a willingness to accept outsiders in a way that can be truly overwhelming. What they won’t tolerate is being dictated to. By anyone. It is a fierce, even savage independence that is born of the environment. You don’t last in Afghanistan unless you are tough. The jagged mountains, the vast deserts, the supremely and deeply beautiful landscape kills weakness and tends to breed a ruthless bloody-mindedness.

But the decades of war have also distorted those values beyond recognition, and conflict has become almost indistinguishable from normal life. We saw that in Maidan Shahr—a dusty village straddling a strategically-important valley half-an-hour to the west of Kabul. It was the last remaining pocket of Taliban resistance within striking distance of the capital.

Under fire cover, the NA troops advanced up the slopes, only to be pinned down, within half-an-hour, by some well-positioned Taliban snipers. They retreated as quickly as they’d advanced, bruised and very bloodied. It was a military disaster, the commander Sher Alam claiming he was simply testing the Taliban.

We returned a week later to check the progress of the battle. What we found was a quiet shabby little village like any other, with a few fighters lounging by the main checkpoint on a seat ripped out of a broken jeep.

"Where’s the battle?" we asked.

"It’s over," they replied. "We reached an agreement."

We raised our eyebrows.

"Our commander wanted to be governor of the province, so that slowed up the negotiations," said the former Taliban fighter. "But then he agreed to a deal and now he’s somewhere in the south with the government. The rest of us are still here with Sher Alam."

He paused for a moment, looked to the hills, shifted his Kalashnikov and said: "It’s just business, after all."

(Peter Greste works for the bbc, and covered the collapse of the Taliban and the fall of Kabul)