The Ayodhya movement has been milked for electoral gains, it has centrestaged marginal political players and is being raked up again as the elections approach, writes S. Irfan Habib. 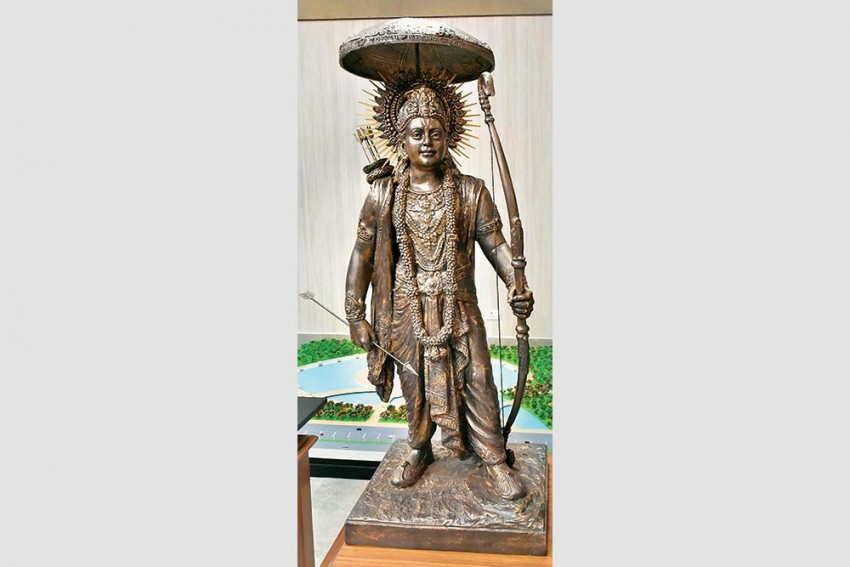 Lord Of The Ring
A model of the proposed statue of Ram in Ayodhya that will be 60 storeys tall
S. Irfan Habib November 29, 2018 00:00 IST Ayodhya Isn't A Hindu-Muslim Dispute; It's A Battle Between Communal And Secular Forces 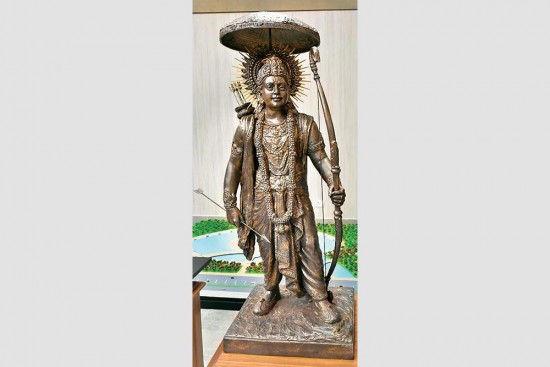 It is more than three decades that the Ayodhya issue has tormented us as a nation. It has helped political parties to garner votes and dupe citizens across religions and used conveniently to distract people’s attention from the core issue of governance. Most legal battles are protracted and this one is too complex to be resolved by the Supreme Court or by any other means easily. However, electoral concerns make a political party shamelessly misuse the Ayodhya issue emotively and divisively.

I have always felt that Ayodhya was never a Hindu-Muslim dispute. Even if a Muslim ruler allegedly built it over the ruins of a demolished temple, which is still being debated, Muslims today should have no stake at all. It was a 16th century protected monument, an ASI property, and thus the state failed to protect its own protected heritage. The Babri Masjid Action Committee and its campaign merely facilitated the cause of Hindu communal groups led by the VHP and its cohorts. They were able to convince a large number of Hindus that Muslims today are as disrespectful to Ram as those 16th century Mughal rulers who demolished the temple. This is a mischievous connect they have peddled all these years.

Actually, it’s a battle between the Hindu communal forces and the secular, pluralist state, inc­luding all its constitutional arms, like the judiciary, executive and the legislature. Unfortunately, it failed us in 1992 and allowed the demolition of the mosque, leading to widespread violence and weakening of faith in India’s secular and democratic values. Today, we see the same forces mocking and violating the SC’s judgment on Sabarimala, mobilising hysterical crowds in the name of faith. In both Ayodhya as well as in the Sabarimala temple entry issue, it is more Hindu mobilisation than a spiritual urge for pilgrimage. It is faith which has finally become the refuge in both the cases and thus the SC judgment means little, if at all.

Coming back to Ayodhya, I reiterate: the issue is not a dispute between the two communities. The Muslims got into it when the temple movement was unleashed by the Sangh parivar and have rem­ained entangled with it legally and politically for long. Lately, they have got wary of the issue. Even the awaited SC verdict doesn’t evoke much hope; rather, the majority of them feel it will impact them adversely, whatever be the judgment.

Muslims got entangled in the Ayodhya issue legally, politically. Now they’re wary of it and feel the SC verdict will impact them adversely.

Even senior leaders like Azam Khan, known for his combative, at times vitriolic, politics, seem conciliatory when he says, “I don’t have any issue with the construction of a Ram temple provided it is not built over Muslims’ blood. We will…accept whatever verdict the Supreme Court delivers”.  However, Hindu­tva rabble-rousers continue to provoke, expec­ting a matching abusive reaction from Muslim leaders. I only hope they don’t bite the bait and just wait for the SC verdict. In its 2010 judgment, the Allahabad High Court in part had already legitimised the argument of faith by conceding the central space for the temple. I believe that a majority of Muslims have reconciled with the fact that the 16th century mosque is no more and the insistence on the reconstruction of a new mosque do not make much sense. It will only help the polarisation agenda int­ended by the RSS and its cohorts.

Only days ago, RSS leader Indresh Kumar openly castigated the SC judges for the delay in judgment and called them worse than the English who “did not have the courage to perpetuate such atrocities on the judicial process”. Coming from the RSS, this appreciation of the British is no revelation. However, it makes their future plans clear—“they (the judges) delayed, they denied, they disrespected”, thus claiming that “the Centre plans to bring a law on the Ram Janmbhoomi-Babri Masjid dispute”. In the midst of this politics, Muslims seem to have no relevance left. They are, in any case, already on the margins of the current dispensation’s preferences.

The temple movement is inspired by hatred for the ‘other’, who is held responsible for medieval excesses. The Ayodhya movement has been milked for electoral gains, it has centrestaged marginal political players and is being raked up again as the elections approach.

Some Muslim leaders and activists in the past have helped the cause by joining the hate-filled Hindutva politics around the issue. Looks like they are tired and cynical now and want to see it resolved through peaceful and constitutional means. In any case most of us, across religions, should be fighting gross inequalities and misuse of religion and nationalism.

(The author is a historian)