The Aussies want to give Waugh a prize retirement gift. Bad news for the Indians. 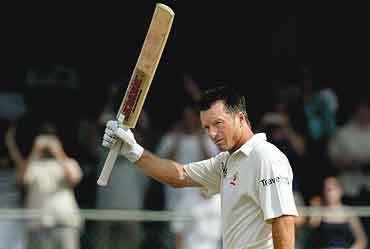 outlookindia.com
-0001-11-30T00:00:00+0553
I was shooting for a television commercial when news of Steve Waugh's plans to retire after the Sydney Test reached me. I was as shocked as everyone else because it was an open secret that Stephen wanted to have another go at beating India in India before signing off. We tour India in late 2004, so nobody expected an announcement from Stephen before that. The news is equally surprising because Stephen is in great form, having scored heavily in the Test series against Zimbabwe, as well as in recent domestic fixtures. However, each individual is the best judge of when it's time for him to move on, and I'm sure Stephen has thought out this decision carefully before announcing it to the world. I have not had a chance to speak to him as yet, but I guess his phone must be ringing every minute of the day. So I'll catch up with him a little later.

Stephen started his Test career when I was a 11-year-old, and I have fond memories of watching him on television and later, playing alongside him in a number of games. Some of the most awesome batting displays I have witnessed from the dressing room have come off his blade. I just have to think of the century he scored in Sydney last year, the ton he scored in Oval in 2001, with a badly injured calf, and the century he made against South Africa in the 1999 World Cup when every run was worth its weight in gold, to realise how much we will miss him after the Sydney Test. Each of these knocks underlined his calibre as a batsman who had the ability to score when each run counted. Even today, Stephen's commitment, work ethic and attitude are touchstones for the modern sports professional, and it is no mere chance that his career coincided with the ascent of Australia to the pinnacle of world cricket.

One of my stand-out memories of Stephen is of what must have been a difficult time in his career. I had replaced him as the captain of the one-day side that toured South Africa in 2001-2002. The one-day series was immediately after the Test series, and Stephen was scheduled to fly out with the Test players the next day. We spent some time together on the night before his departure, and his advice to me has often come back to me over these past two years. Stephen had told me then that I should always see myself first and foremost as a batsman who had to score consistently for the team, and only then as the captain. He told me never to let the responsibilities of captaincy lead to my neglecting my batting. Because if my batting went off the rails, it would be even more difficult for me to do justice to my duties as captain. There are times when as captain one does worry about the problems and bad form of those around him. It is at such times that I silently thank Stephen for giving me such sound advice at the start of my tenure as captain of an Australian cricket team.

Stephen's announcement obviously adds a whole new dimension to the forthcoming Test series. It acts as an added bit of inspiration for each player since all of us would want to ensure that he ends his career on a high. We will all stand up for the champion leader to ensure that his farewell will be marked by the glory that distinguished most of his career. It has been great to share the dressing room with Stephen, and during these last four Tests all of us will be aware that this will be a special time for the captain.

The Brisbane Test is a week away, and most of us have rejoined our state teams for training. We are going through a short winding down period right now, after the hectic one-day series in India, but each of us will have at least one one-dayer for match practice before we head to Gabba. Personally, I have been taking it easy for the last one week, and will be playing a Tasmania versus New South Wales game on Saturday, and it must be disappointing for Glenn that he is not yet fit enough to play in that game. Brett is also not yet sure for that game, but it's already clear that both these guys will not be ready for the first two Tests. Knowing them, they will have refocused their energies on getting ready for the Boxing Day Test, and most probably they will be ready for selection by then.

Meanwhile, the Indians have made a quiet entry into Australia. They arrived on the day for the Australia versus England World Cup Rugby final, so that ensured that there was not much media glare on their arrival. I went to watch the finals, and was disappointed that the Australians lost after coming so close to victory. However, the way they conducted themselves in those difficult moments after defeat made me proud to be an Australian.

Coming back to the Indians, a few articles discussing ways and means to dismiss the redoubtable Sachin Tendulkar have already started appearing in newspapers. Dean Jones and Damien Fleming reckon that it is the short-pitched stuff that will get him, while Indian expert Bishen Singh Bedi has expressed doubts over whether Sachin will ever get big centuries since he tires in the 60s and 70s. I must say all this is pretty harsh on a bloke who has just completed his last series as man of the tournament. Yes, we will test him with the short-pitched stuff and he will have the ball whizzing around his ears, but then, that's what we plan for most of the other Indians as well. I don't think the team looks at Sachin Tendulkar or any other batsman in isolation, so what the press is suggesting right now is not really how the think-tank sees things. We will be trying to find chinks in the armour of all the top-order batsmen, and we respect the Indians too much to concentrate wholly on one player.

There will be similar articles right through the run-up to the Brisbane Test, and how much it will affect the tourists depends on how much Sachin and the rest of the Indians want to read into such articles. The first warm-up game is already under way, and it is interesting to see Sadagopan Ramesh open the tour with an 80-odd. I remember Ramesh from our 2001 tour of India. He played well on a couple of occasions in that series, and another good knock against the Victoria Bushrangers might get him his place back at the top of the order. It must also be heartening for Indian supporters to see that Tendulkar hit a strokeful 80 when his team was in a bit of trouble. Every batsman likes a good start to the tour, and I'm sure Tendulkar's no different. For the rest of the top order, they will be hoping to get another knockaround in the middle before readying themselves for the real thing next Thursday.