An active, responsible and vigilant citizenry is our greatest need. Our apathy will be our death. Or murder. 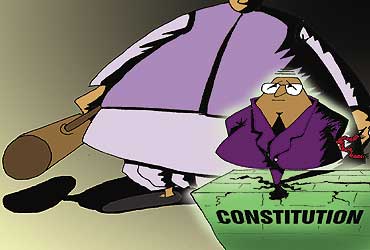 outlookindia.com
-0001-11-30T00:00:00+0553
The problems besetting India often seem so enormous, complex and inter-connected that there just doesn't seem any way out. Solutions offered by experts and well-meaning citizens seem sketchy or impractical. Still, the range and enormity of our problems is no excuse for inaction. Staying paralysed is no way to conquer the tall mountain looming ahead. We have to start scaling the mountain the only way we can—one step at a time. Every step, however small, however simple, is one step closer to the goal.

What is the one small step we could take to restore faith in the rule of law, in democracy, in justice, in creating an environment that gives its citizens equal treatment, safety and protection? In the aftermath of February 27, these are concerns that mock us, fears that agitate us, despair that threatens us all. One solution (and it is 'a' not 'the' solution) is small, simple: ban political transfer of bureaucrats.

Rule of law is simple. It is basic. It is not negotiable. There are no mitigating circumstances. There are no political compulsions or communal prejudices that justify law-breaking. You break it; you must pay for it. No matter who you are. India's greatest strength is that despite much that has gone wrong with our system, there are still bureaucrats of remarkable integrity and courage. Men in Gujarat like Vivek Srivastava, the SP of Kutch, or Rahul Sharma, the SP of Bhavnagar, and others. When Gujarat became a seething cauldron of blood and hate, these officers stood their ground, led their men from the front, put down fascist thugs firmly and maintained the rule of law. Their greatest challenge was not to tackle murderous rioters, but to fend off interference from their political bosses. They did it bravely—not because they were consumed by some great notion of valour, but because it was a simple matter of doing one's duty. They owed allegiance only to the Constitution that enshrines the rule of law and it was their responsibility to maintain peace in their area.

Far from being rewarded, they are punished—transferred. Look at our degenerate culture of permissiveness that politicians have the gumption to order officers to violate the Constitution. Look at our own permissiveness in reacting to it without outrage. And when these honourable men are transferred, we again respond with our predictable insouciance. It was only to be expected. Why? Why cannot we, so-called enlightened citizens, erect a wall of protest that makes it impossible for expedient politicians to push through such arbitrary and mala fide transfers?

The politicisation of the bureaucracy is one of the greatest and least-understood perils of our democracy. Promotions and transfers should be strictly on time, merit or part of affirmative action. But the way politicians today blatantly use and abuse bureaucrats as lackeys is appalling. Even worse is the brazen impunity with which they do it and the way they get away with it. If citizens don't band themselves into vigorous, active lobbies to stop such offensive actions of the political establishment, blood will be dripping from our doorstep soon. The biggest mistake the middle class makes is to assume bad things happen to other people in other places. If this curse is not stopped today, tomorrow it'll be stones smashing through your window, your pregnant daughter's belly being cut open, your son being burnt alive. And there won't be a Rahul Sharma or a Vivek Srivastava to save you because when they were being kicked out, you did nothing.

I've come to the point where I believe that an active, responsible and vigilant citizenry is India's greatest need. This apathy will be our death. Or murder. Each one can do something to create a culture of consciousness whereby misuse is not tolerated.The media has done a remarkable job in highlighting the heroism of these officers and the fate they now suffer.

Most citizens assume it is the media's responsibility to fix all the ills in a society. It isn't. It is the media's job to expose the wrongdoings. Fixing them requires participation by all sections of a democracy. Citizens can form a forum, petition, lobby or sit in dharnas. They can swamp media offices and chief minister's offices with letters and emails of protest. When one of these offending politicians makes a public appearance, boldly demand an explanation. There should be public interest litigation questioning why the government has transferred these men. The IAS and IPS associations, the biggest sufferers, have to urgently formulate ways to stop this misuse, how to take legal recourse to protect the independence of the executive. If you really want to, there are so many ways of turning the heat on unscrupulous politicians.

Sure there is corruption, misuse, weakness and ineptitude in our bureaucracy. But there are many good men and women too, officers who have done their duty and served the nation well. Having covered riots for two decades, I know there is no such thing as spontaneous rioting. The initial spark can often take the authorities off guard, but a determined bureaucracy working sans political interference can, and has, put down trouble. It is when the officialdom colludes or chooses to look the other way that situations like the Bombay or Gujarat riots fester for days, even weeks. Isn't it preposterous that the Shiv Sena now has the temerity to try and block Justice Srikrishna's elevation to the Supreme Court? All because this fearless and honourable man stuck to evidence and indicted it in the Bombay riots!

There are very few institutions left in India that command people's confidence. If we allow self-serving politicians to destroy our last few bastions by keeping out the few good men, we will be signing our own death warrant. It is not law that will prevent crime, not POTA that will curb terrorism, it is a culture where officers are accountable, but are allowed to do their job without fear, favour or political interference. If only like the Americans we had the intelligence, simplicity and humility to lionise our heroes.