An aggregation of positives, plus that halo, made Kalam an icon 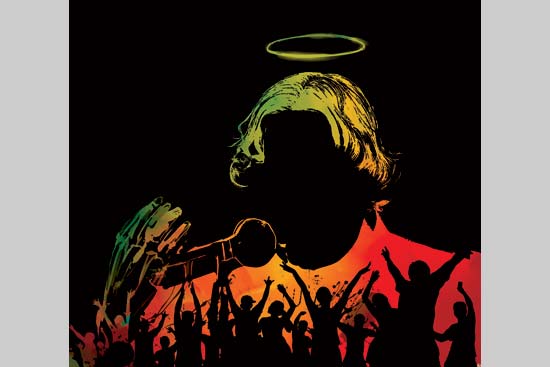 Some years ago, I happened to be in Louisville, Kentucky, famous for having given the world Muhammad Ali and a baseball bat called the Louisville Slugger. This is the American south—conservative, Bible-thumping, bourbon-sipping aristocrats with a reputation for insularity. Imagine my surprise when in my hotel lobby, I saw a board announcing a lecture by A.P.J. Abdul Kalam. It seemed odd that the former president had been invited by the local chapter of Rotary International to deliver a talk in Louisville, of all places. Intrigued, I entered the hall and there was no mistaking that goofy hairstyle, that deferential dem­eanour, the simplicity of his message—science and hum­anity—and the delivery style, like he was lecturing 10-year-old students. The hall was packed, and not with nris but local Americans, mostly white. He had launched into biotechnology when I had to leave, but it struck me that the Kalam effect was not just confined to India but had a global resonance.

It’s all to do with aura and context and the ‘halo effect’. In India, we bestow our scientists who master rockets and missiles with a magical, if militaristic, aura. Kalam’s journey, from humble origins to riding the presidential chariot, though with a commoner’s charm, added to the mystique. Then there was the context: an apolitical Muslim elevated to the highest post in the land by a BJP government. Simple living and high thinking is an att­ractive Gandhian construct, and Kalam demonstrated both. Then there was his informality which allowed him to connect with a large mass of Indians, and not just the youth, bestowing on him the stamp of the ‘people’s president’. Beyond all this lies the halo effect. It is a recognised psychological term used to describe a cognitive bias in which positive feelings about a person in one area can cause neutral traits to be also viewed positively. The person has effectively acquired a halo.