Nelson Mandela, the master-healer, was friendly, but not partisan. He wrapped realpolitik around a moral code of courageous honesty and reconciliation. 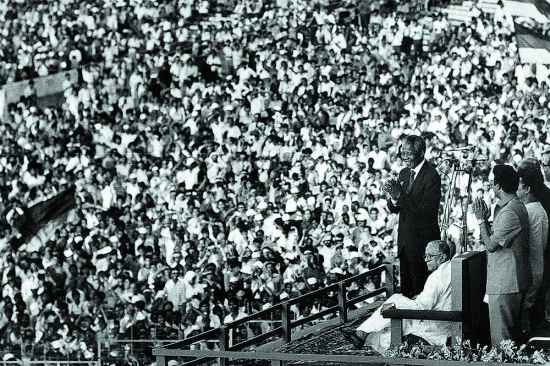 He looked to his left, he looked to his right. His head had never turned to see, nor his eyes ever captured, such an expanse of humanity at one go as he now saw.

Nelson Rolihlahla Mandela, fresh out of 27 years in jail, was in Calcutta, in the winter of 1990, on his first-ever visit to the country that had supported his struggle with passion. The Eden Garden cricket stadium was packed to far more than capacity, the green completely covered, the stands overflowing.

To say South Africa’s man of destiny was stirred would be to say the obvious. He was stirred beyond his expectation, his experience. To his host, West Bengal chief minister Jyoti Basu, seeing such a large gathering was nothing new. But even for the veteran Communist leader, there was something exceptional about that day. Jyotibabu had not seen such wild enthusiasm exploding in a public meeting, at least not since the time Calcutta greeted the then “just released” Bangabandhu, Sheikh Mujibur Rahman.

Neither host nor guest forgot the experience, nor the real meaning that lay...