At Sixes And Sevens

The suddenness with which Modi adopted hate as his poll campaign has left the Congress groping for an effective counter-strategy. 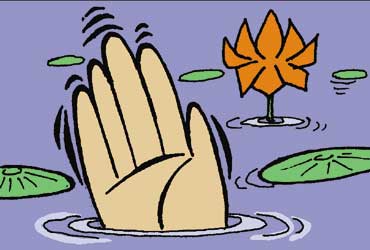 outlookindia.com
-0001-11-30T00:00:00+0553
When one looks at the confusion that prevails in the Congress today, it is difficult to remember that till just six weeks ago this party had virtually taken it for granted that it would win the next parliamentary elections in 2004. And why should it not have been confident? Did it not control 14 states in the country, against the BJP's three? The Gujarat elections have punctured the optimism. The Congress now knows that it has a fight on its hands. But it does not know precisely what it is fighting and what to fight with.

Its confusion is mirrored by its almost complete absence from the front pages of the newspapers. While no day goes by when the BJP or the VHP do not hog the headlines with a fresh assault on the 'pseudo-secularists', Muslims, Christians, Sonia Gandhi, intellectuals and all other such 'enemies of India', the Congress is lucky if it gets a frontpage story once in a week. So great is the confusion that its spokespersons in Delhi, from Sonia Gandhi to Anand Sharma, have maintained a deafening silence on the attack by rss cadres on the American missionary, Joseph Cooper. The intent behind the attack was deadly. The assailants tried to stab Cooper in the stomach, a blow that would most probably have been fatal. Only his success in blocking the knife thrust with the palm of his hand saved his life. If ever an action deserved condemnation by the entire country, it was this. True to their tradition of running with the hare and hunting with the hounds, L.K. Advani and A.B. Vajpayee have studiously looked the other way. But why has Sonia Gandhi not said a word? What has prevented the Congress from using this godsend to warn the country of where the politics of hate and confrontation will take it? Can it be the fear of drawing attention to her Italian, Christian origins? If so then the Congress is lost; the BJP has already won and the future of the country is bleak.

A more likely explanation, however, is the suddenness of the change in the Congress' fortunes. Narendra Modi broke one of the most respected taboos of Indian politics when he based his election campaign in Gujarat on hate and the incitement to violence against Muslims and Christians. Modi not only did this but won. The suddenness of that development has left the party groping for an answering strategy.

Currently, all that the Congress seems able to think of is changing its chief minister in Maharashtra and possibly some other states. The purpose of such changes has never been entirely clear and it is no more so today. But the most that a change in leadership can do is bring in a more dynamic leader and make possible a better coalition of satraps within the party. The latter might reduce infighting and enable it to present a more united face to the people (fewer 'rebel' candidates) in the next election. If this is all that the Congress can think of now, then its chances in the assembly elections this year and the parliamentary polls next year are not very bright. The truth, as the three bye-elections in Rajasthan showed, is the anti-incumbency factor that has dominated Indian politics since the early eighties is far too strong for such cosmetic changes to make any difference to the outcome of an election. And today, precisely because the Congress controls 14 states, the anti-incumb-ency factor is likely to work in the BJP's favour. There is thus a very real possibility that by the end of this year even without the VHP's campaign of communal polarisation, the BJP could be back in power in Delhi, Rajasthan, Madhya Pradesh, and Chhattisgarh. Were that to happen, it is a safe bet that Vajpayee will go for an early election in March next year, to capitalise on the swing in the BJP's favour. There is thus a more than even chance that the BJP will again head an nda-type coalition for the next five years.Only this time it will be a VHP wolf wearing the BJP's skin.

If the Congress wants to win in the states that go to the poll in November and, more particularly, if it wants to win next year, it must find a way to overcome the anti-incumbency factor. The only way it can do that is by making a clean break with its own past. In specific terms it needs to do three things: first, give up the politics of votebank aggregation, especially of the scheduled castes, backwards and minorities, that it has relied upon for the past five decades. This strategy is already in tatters after the rise of leaders like Mayawati, Mulayam Singh Yadav and Laloo Prasad Yadav. But more importantly, it has to give up the implicit assumption on which it was based—a large block of the mainstream Hindu vote is bound to remain with the Congress anyway so all it has to do is pick up the vote of the minorities and the underprivileged. This is precisely what Hindutva has succeeded in invalidating. Today, the seemingly indiscriminate attack on Sonia's foreign origins, and on Muslims, Christians and intellectuals is designed precisely to consolidate the mainstream Hindu vote behind the BJP/VHP and rob the Congress of what remains of its mainstream vote.

What the Congress needs to do is to pit not secularism against Hindutva but cooperation and accommodation against confrontation. Many of the BJP's goals, such as the desirability of a uniform civil code and the release of land for a temple at the 'Ram Janmabhoomi' in Ayodhya, are legitimate. What isn't is the use of threats and force to achieve them. The politics of hate can only stiffen the minorities' backs and eventually make them strike back. The resulting violence will make India an international pariah and set back economic development by decades. In each of those years more than three million of its youth will enter the job market and find they have no future. The VHP's politics spells death for India. Not spelling this out to the people clearly will turn the Congress into an accessory to its murder.