At Peace With Strife

Everyday life in Kashmir is a continuously creative ­engagement with conflict 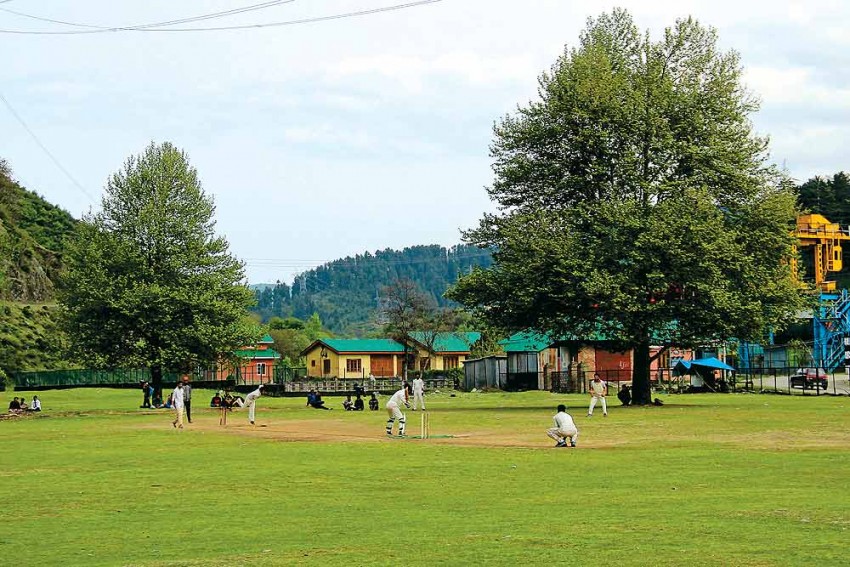 Vignettes
Cricket in Baramulla
Photograph by Getty Images
Naseer Ganai May 19, 2017 00:00 IST At Peace With Strife 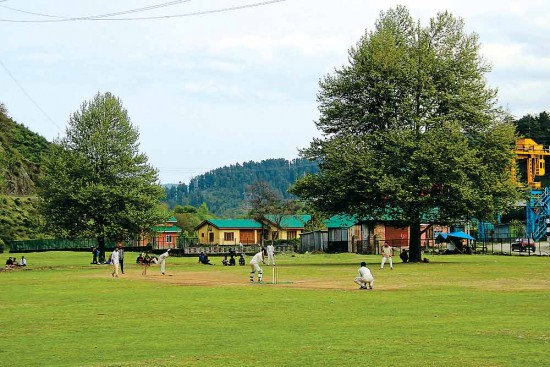 For Prof S.M. Wijeyaratne from Sri Lanka, Srinagar is like any other place. He was here for the World Health Congress along with his wife, Prof C.N. Wejaratne. “If there is any news about Kashmir, it is on violence. But I know it is just one incident somewhere,” says Wijeyaratne. “Sri Lanka was worse. We had suicide bombers.”

As they say, life never stops. One of the consequences of the dispute over Jammu and Kashmir is a smokescreen especially around the Valley, through which all that is visible is the conflict, subsuming every aspect of everyday life. So what does the raging violence hide about life in Kashmir?

Last Saturday, May 13, there were scores of young men waiting outside Tagore Hall in Jawahar Nagar, an upmarket locality in Srinagar’s civil lines, while a few metres away, at Bakshi Stadium, the J&K Police was holding a recruitment rally for women. Two security guards at Tagore Hall’s main gate were not letting the young men enter the premises. It wasn’t a political event the youngsters, mostly students, were keen to attend, but the Mr Kashmir Body Building Competition. The price of the ticket—Rs 300—was all that kept them from being inside. And as this is Kashmir, the word ‘injustice’ is what comes to mind first to describe a situation like this. At least that is how Khalid Ali, a 27-year-old bodybuilder who trained at Fit and Fine Gym in Srinagar’s Old City and was inside the premises preparing to contest in the 85-kg category, put it: “This is unfair. The price of tickets is too high. It should not have been more than Rs 50. You cannot charge Rs 300 from students. It is injustice.”

A regular at bodybuilding competitions, Ali said he would be going to Thailand for another contest next month. “I am proud of what I do,” he said.

Meanwhile, the spectators were jeering and whistling. Making himself heard despite the din, 34-year-old organiser Riyaz Ahmad Bhat told Outlook, “It was much more overcrowded last year. The rush was just too much to handle, so this year we decided to charge Rs 300 per ticket.”

The bodybuilders had come from different parts of Jammu and Kashmir. Mohammad Rafiq Bhat, who had come from south Kashmir’s Anantnag district, was subjec­ted to some major jeering as his muscles did not look adequately toned. Not one to give up, he said, “I will be Mr Kashmir next year. I will work hard.” 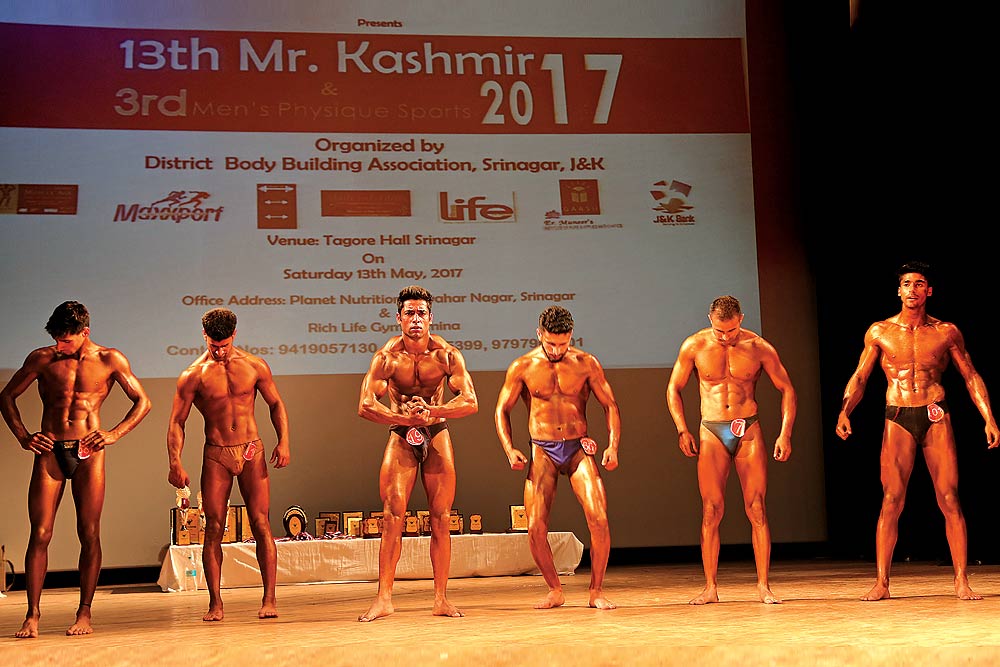 Four kilometres from Tagore Hall, on Boulevard Road, is Winterfell Cafe. ­Saqib Mir, the 34-year-old proprietor of La Delice bakery, better known as “French bakery”, was talking about his experience of doing business in Srinagar. Listening to him were other young entrepreneurs, academics from Kashmir University, social scientists and government officials, who had assembled to brainstorm on how to generate employment for young Kashmiris.

Mir spoke about the dismal economic scenario in the Valley. “We are doing quite badly on the economic front. There is no professional training in Kashmir. The work culture here is slow. We train people and they leave. That’s not efficient at all,” he said. More than the conflict, it is the laidback work culture that seems to worry him. And yet, he admits it was the conflict that had spurred him to leave Srinagar and fly to France when he was 18.

“Like film ­festivals on the rubble of homes in ­Gaza, our smiles, our ­business—that’s our resilience,” says a Srinagar cafe owner.

Like many other Kashmiris living abroad, Mir had been yearning to return to the Valley since finishing a diploma in baking from a reputed institute in Paris. It was only in 2014, though, after he had married a French woman and had two children, that he could set foot in Srinagar again, leaving behind the bakery and handicrafts store he owned in France. “I want my children to grow up in Kashmir because of our rich culture. That’s the reason we are here,” he said.

Mir found a place with a great view of the Dal lake to set up his bakery. But not long after Le Delice started business, the machines were damaged in the 2014 floods. The bakery was reopened last year, but the long protest strikes called by Hurriyat Conference after the killing of Hizbul Mujahideen commander Burhan Wani forced Mir to close down La Delice again. Now it is back in business. 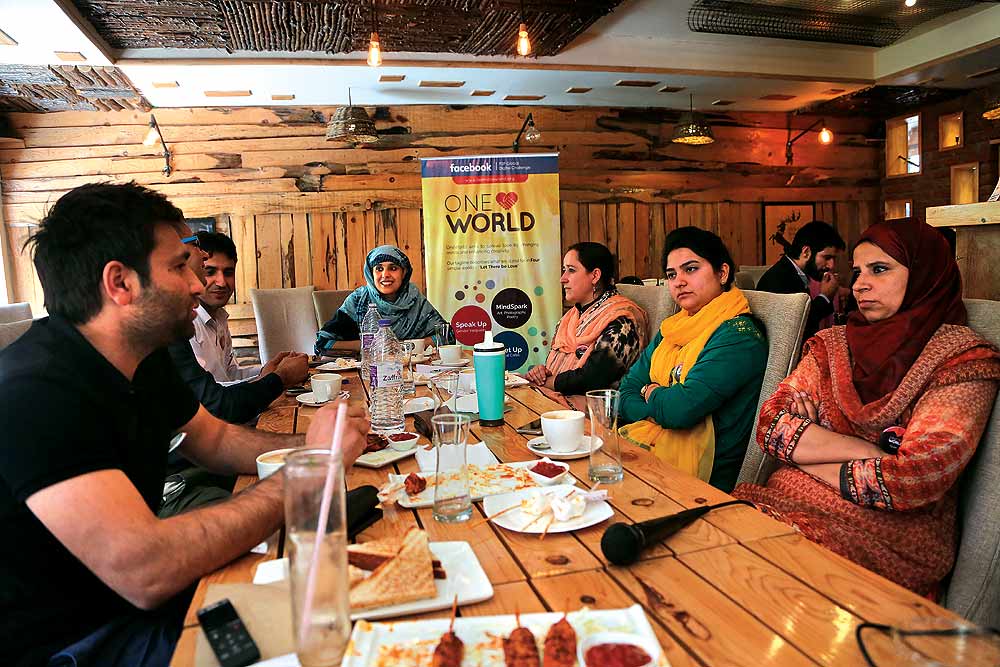 Entrepreneurs meet in a Srinagar cafe

“It is true the situation is bad everywhere. But it is only in Kashmir that life stops in many ways because of it. Elsewhere, businesses don’t close down and schools remain open,” he said. “The schools were closed for five months last year and I had to go back to France. I cannot educate my children like this. If children stop going to school, what future will they have?”

On the same day that Mir was speaking at Winterfell Cafe, London-based Kashmiri writer and academic Nitasha Kaul was talking about her first novel Residue at the Nehru Park bookshop. The main hall was full and the most of the questions were about the Kashmir conflict. And, predictably, as she is a Pandit by birth, she was specifically asked about the jingoistic attitude of many Pandits towards Kashmiri Muslims, often on display these days on news television. “I am many things at one time, one of which is Kashmiri,” replied Kaul. “I don’t identify myself in communal terms. I don’t speak for a set of people. I speak for the community of people who seek justice and oppose injustice.”

Acknowledging the pathetic ignorance about Kashmir among most non-Kashmiris, she said, “In Haryana, I was told Lal Chowk is so named because there is too much blood. I was shocked to hear that. I also heard that grenades are so common in Kashmir, buying one is like buying eggs. There is really a big chasm in the discourse on Kashmir and, therefore, a need for bridges to understand what the reality is.” For decades, Lal Chowk has been a nerve centre of political and economic activities in the Valley. Named after Moscow’s Red Square by some communists in Srinagar, who thought of it after the Bolsheviks seized power in Russia in 1917, life moves on in Lal Chowk as well.

“The tragedy is that people outside Kashmir don’t know that Kashmiri society has not broken down or become dysfunctional despite the prolonged insurgency, but has adapted to it rather well,” said Sumantra Bose, professor of international and comparative politics at the London School of Economics, in his lecture at the Central University of Kashmir earlier this month.

Syed Mujtaba Rizvi, 27, who runs Goodfellas Cafe at the Bund—a wall between river Jhelum and Residency Road—along with two partners, believes that Kashmiri society has remained functional through a creative eng­agement with conflict. “Why do Palestinians have a film festival on the rubble of homes destroyed by Israel in Gaza? While Cannes is happening, there is a film festival in Gaza too. Why do they do it?” asks Rizvi, a postgraduate in “management of innovation and fine arts extension” from Goldsmiths, University of London. “It is part of everyday resistance. Our lives, our smiles, our business—that’s our resistance and our resilience.”

By Naseer Ganai in srinagar

A Trade Union For Team India