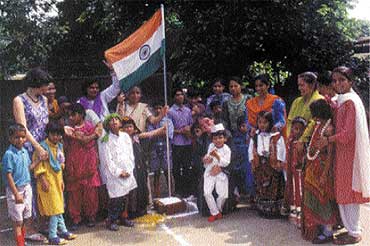 outlookindia.com
-0001-11-30T00:00:00+05:53
When Jo McGowan and Ravi Chopra decided to marry and shift to India from the US, she gave herself two years to decide whether she wanted to stay on. And ended up "grinning and bearing it" for 11 years. In that period the Chopras had two children and adopted a baby girl whom they named Moy Moy (meaning little sister in Cantonese). Four years later, they found out that Moy Moy had been born with cerebral palsy. They also realised that there were not enough good institutions for the mentally disabled in India and despaired of ever finding proper care for their little daughter.

Meanwhile Jo had begun working with the Latika Roy Foundation which was set up by a retired Doon schoolmaster. The foundation ran an activity school for children and was exploring the possibility of starting more childrens' organisations. That's when Jo hit upon the idea of setting up a school for children needing special care—and thus was born Karuna Vihar—a school for the mentally handicapped.

To get a better idea of just how to go about setting up the school, three women who were already involved in the foundation's activities, Kamini Sabharwal, Vina Srivastava and Jo visited similar schools in Delhi, Mumbai and Ranchi. The Spastics Society and the Rehabilitation Council of India chipped in with some advice. The next step was to write to Volunteers and Services Overseas in the UK; an international human resource organisation which sent a professional special needs educator. Paula arrived in December 1995, rolled up her sleeves and got to work. KV opened in a rented building in Dehradun in '96 with only one full-time worker, a handful of volunteers and two students. Today the school has 30 children on its rolls and a long waiting list from which another 30 are selected for the home management programme—a preliminary interaction course before the children are taken in as regulars.

The school boasts professionals like a speech therapist, a developmental paediatrician and special educators. Activity is the school's mantra and children are grouped on the basis of their abilities rather than age. As far as possible, individual learning programmes are drawn up to cater to each child's unique requirement. While children with Down's syndrome, cerebral palsy and degenerative mental disorders are admitted, KV recognises it can't take on children with major problems but only those with mild to moderate disorders.

Presently, KV is a day school which has children in the age group of four to 18 years, but parents are strongly encouraged to bring in their children when just a few months old. The organisation also conducts campaigns to spread awareness on the problems of the mentally challenged. The school has had notable success, what with people travelling from far away places like Gopeshwar, Batala and Rishikesh to bring their children here. Since most of the students come from deprived, poor families the fee per child has been fixed at about 2 per cent of the parents' gross earnings. However money has never been a reason to keep a child out. Happily, funding too has never been a problem. Jo is the main fund-raiser and travels regularly both here and abroad for this purpose. The money comes from many sources, the Tata trust is a principal funder, as is the ongc. Help also comes in other forms: renowned lensman Avinash Pasricha photographs the calendars and brochures for free, which are later sold.

What drives Jo is the satisfaction in seeing the vast improvement in the school's children. As a mother, she's happy about the way Moy Moy is improving. And there are also the heartwarming stories of children like Vishal. Once, standing in front of a mirror he refused to call himself anything but pagal—because he'd only been called that all his life. After a couple of months in his bright and cheery school, he stood before the mirror again, pointed to himself and proudly said: "Vishal"!

Everybody at KV is alive to the fact that these children need congenial environs even after leaving the school, and that's why their main concern is to prepare them and their parents to face up to life. A part of this attempt is the 'parents group', which takes decisions about the children's future, and KV's vocational training programmes. Some business houses also give the children jobs suited to their inclination and capabilities. For KV, the goal is to give the children the confidence to persevere against all odds. Karuna Vihar can be contacted at 493, Indira Nagar, Dehradun-248006; phone: (0135) 763256); e-mail: karunavihar@sancharnet.in.