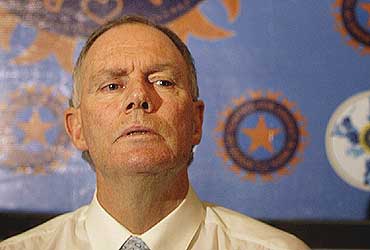 outlookindia.com
-0001-11-30T00:00:00+0553
Australian ace Greg Chappell, 56, anointed coach of the Indian cricket team for two years, believes that Team India is poised to challenge Australia for the mantle as the world's best. In his comprehensive, interesting, and more importantly, winning presentation titled "Theories and Ideas" before the Board of Control for Cricket in India's six-man selection panel, Chappell says he could help India achieve this by remedying a number of issues.

The presentation made by the former batsman (7,110 runs in 87 tests at an average of 53.86, with 24 centuries) spells out his objective and deliverables lucidly (see infographic). The objective: Lift team India to No. 2 in ICC Test ratings in the next 18 months and improve the current ICC ODI ranking of No. 8, given the importance of the World Cup in two years' time.

While saying that India made tremendous gains during John Wright's stint, Chappell suggests developing a more aggressive and confident demeanour among the fringe and the emerging players. He cited examples of West Indies and Australia in recommending raising the playing standard of the fringe players as being essential. "Great teams are a result of positive peer-pressure motivating team members to higher levels of adaptation and self-confidence," he says.

Chappell draws on his experience of being a part of the decision-making process in the mid-'80s to raise standards in key areas that led to Australia's current success. "I was involved in the selection group, with coach Bob Simpson, that developed a vision and a strategic plan that brought together a group of cricketers who wouldn't only challenge the existing West Indies dominance but also take world cricket to a new level," he stresses.

Chappell, who led Australia in 48 Tests, says selection criteria and implementation, talent identification and player welfare and support were of critical importance to the system's success. "It has resulted in the emergence of a highly-competitive, stimulating and creative environment. Critically, the 'middle' group of players continues to be elevated to becoming consistent 'top level' performers in this dynamic structure," he says.

He has identified Saurav Ganguly, Sachin Tendulkar, Rahul Dravid, Anil Kumble, Virender Sehwag, Harbhajan Singh and v.v.s. Laxman as the core group. He may entrust this group with a role in the development of players in the learning-to-compete stage. "With Sehwag expressing captaincy aspirations, the learning process for future leadership roles needs to be viewed as critical," Chappell says.

Tracing some milestones in cricket history since the advent of Bodyline in 1930s, Chappell says Twenty20 cricket—not yet at international level—will be the next big thing in the game's evolution. "The game will force a greater range of expressions and demands on players and these will need to be developed and managed expertly," he said, indicating that his plan was not just in step with the evolution but perhaps a step ahead.

But his real focus is Test cricket. Chappell points out that Australia's overall aim is to give itself enough time to get 20 wickets. He pointed out that it does this with a combination of fast scoring, long batting order, targeting weak links in the opposition attack or batting line-up, an improved strike rate of a wicket per 10 overs so that the group is on the field for only around 100 or 120 overs, the tactical use of quicker bowlers before the breaks and late in the day, fielding excellence and flexible captaincy that develop tactics with 'real-time' solutions within the basic strategic framework.

Expectedly, his study of India in Test cricket says it has presented a group of world-class batsmen over the last few years—Tendulkar, Ganguly, Laxman and Dravid—besides the emergence of the 'future champion and team leader' Sehwag. Chappell believes that Yuvraj Singh, Mahender Singh Dhoni, Gautam Gambhir and Ambati Rayudu will keep Indian batting world-class into the immediate future.

It is when he turns his attention to the task of taking 20 wickets—this has always been an issue for Indian teams, especially overseas—that Chappell's analysis is incisive. "Team India has a number of issues with the bowling attack. Working through these and stimulating the confidence of the group to bowl around Anil Kumble will be critical to future success. The coaches/captain and senior players working with the bowlers in encouraging the performance mindset is imperative," he says.

He recognises how recent reports about Harbhajan Singh's action (by ICC match referee Chris Broad) have caused concern for both the player and, critically, the Indian attack's potency. "Given his attitude and his youth, it is proposed that managing this situation positively is of the highest importance," he says, indicating that he would pay attention to ensuring that the off-spinner continues to strike a lethal pairing with Kumble.

As for one-day cricket, Chappell points out that Australia's objective is to have the confidence to chase 300 runs. He talks of how the champion team typically uses the 50 overs. It employs Adam Gilchrist as an impact player in the first 15 overs, giving the team the chance to get around the 90-run mark. Then, emphasises on partnerships in the 15-to-40-over period, keeping wickets in hand. In the final 10 overs, it employs a skilled manipulator at one end (Michael Clarke has replaced Michael Bevan) with hitters at the other end so that eight or nine runs an over becomes achievable.

On the field, Chappell says, Australia is flexible in its use of bowlers, going in with six or seven options, considers the ability to bowl the targeted bouncer and a varied range of speeds critical with wides and other extras as absolute 'must nots'. It also identifies and develops exceptional, versatile fielders while the commitment to not give away 'safe shot' singles is paramount.

As for India, he believes it needs to develop Australia's abilities and attitudes—confidence in chasing totals and a tremendous belief in the depth of its batting. India lacks a couple of 'situationally aware' defensive bowlers who get through quick overs in the middle stages for not many runs. He says India gives away too many runs in extras and also easy runs in the critical early and middle overs.

Chappell also pays attention to the fact that India regularly gets into winning positions but does not turn these moments to its advantage. Saying that this is a crucial difference between good and great teams, he proposed focus on this area to build on the progress it has made under Wright. "Facilitating the group learnings to seize the moment will be critical to moving beyond the current mindset," he believes. "With the Super Series ICC Champions Trophy and Asia Cup coming up over the next 18 months, the team's objective must be to generate these improvements to allow Team India to perform on the bigger stage in 2007," Chappell says.

For someone whose website is called The Chappell Way (www.chappellway.com), it will be interesting to see how he uses his knowledge and experience to help India challenge Australia as the world's best cricket team. It is a nice dream to have but millions will be tracking him as he sets about actualising that.