Can you tell a story with just everyday images and situational sounds? Sengupta does it seamlessly. 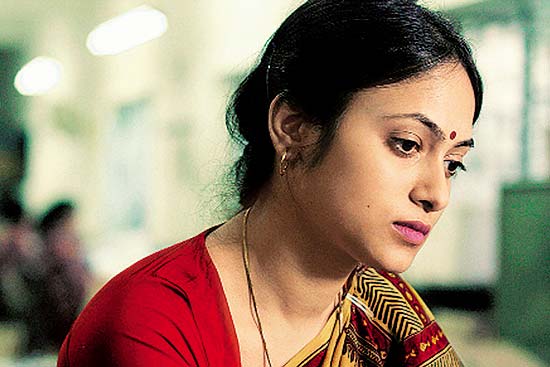 There’s very little in common between Asha Jaoar Majhe and In The Mood For Love, but somehow Aditya Vikram Sengupta’s debut feature reminded me a lot of Wong Kar Wai’s classic romance. Perhaps it’s to do with the abiding images of the two protagonists walking/cycling along narrow city alleys with little spoken yet a lot communicated through music; just the plaintive shehnai music in the background here, and the aching melancholy of Yumeji’s theme there. Like In The Mood For Love, Asha Jaoar Majhe is a quiet, almost silent film, yet each of its frames is resonant with unspoken feelings. Can you tell a story with just everyday images and situational sounds? Sengupta does it seamlessly.

Asha Jaoar Majhe is about the sheer magic that camera and sound design can create toge­ther. In fact, it’s the sound design that sets the context for the film, the reality of lost jobs, inflation and working class angst is laid bare through those sounds of protests on the loudspeaker. The suicide of a mill-worker, the sorrow of his wife and five-year-old daughter, the mill shutdown and workers crying out for accountability. You hear them but never see the disorder and unrest brewing. Not just this, what’s also remarkable is the way the film captures the sounds of the various phases of the day.

What you do see are the daily journeys of the two protagonists—a young couple—over a 24-hour cycle. A jou­rney which also brings Calcutta alive on screen in hitherto unseen ways. One works in the mornings at a handbag fact­ory and other in the night shift at a printing press. It’s home, to work, to back home and then work again for the wife; and work, to home, to work and then back home the next morning for the husband. It’s the little details that reach out. That bus ticket she tucks under her watch or the bindi stuck on the mirror. The lunch neatly kept on the dining table, the leftover bones given away to the neighbourhood cat. And the sharing of daily rituals, the division of labour so to speak—be it praying, hanging clothes out to dry or putting the change in the piggybank. He buys the fish, she cooks. He gets the ration, she puts it in the allotted boxes. He soaks the clothes in det­ergent, she washes and irons them, he arranges them in the almirah. On paper it would seem difficult to pull off a film like Asha Jaoar Majhe that rests on banal daily rhythms, but Sengupta fashions a lovely tale of love in times of recession. It’s about routinised work lives, the loneliness of living in shifts in your own homes, of being a family, yet not knowing the pleasures of eating and living together. But hope lives. In dreams if not in reality. Asha Jaoar Majhe is also about finding eternity, and a reason to smile, in just a stolen moment toget­her, however fleeting it might be.