As The Crane Flies

The BJP has pulled her out as a trumpcard. But it could kill the game. 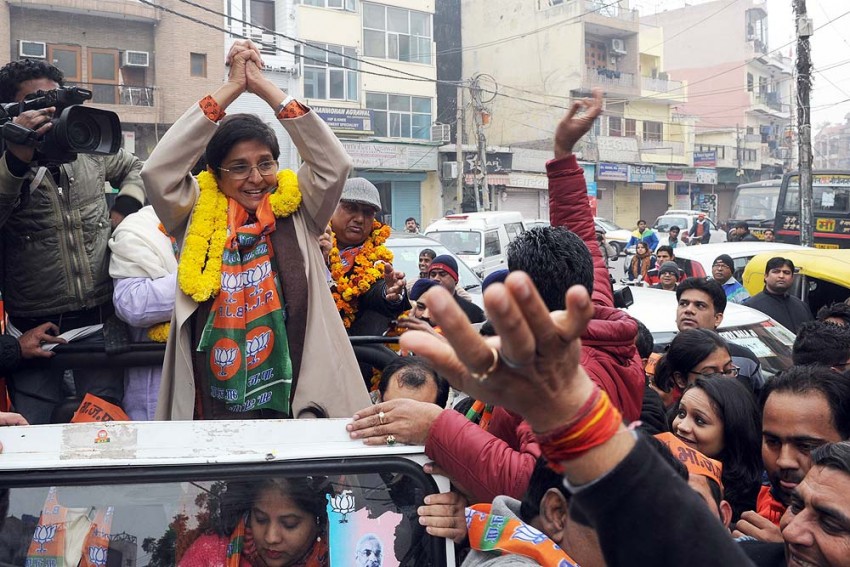 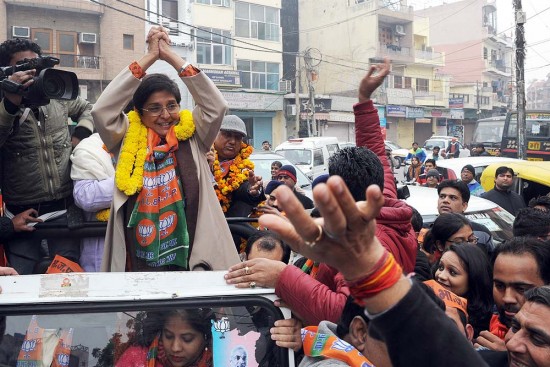 Hypocrisy, they say, is great fodder for comedy. Once Kiran Bedi had called Arvind Kejriwal an opportunist who deserted his ideals. When a news anchor queried her on similar lines recently, she left the interview midway.

People outside the capital city may wonder what the fuss is all about in what is but an election for a “glorified municipal corporation” or a quasi-state, but Kiran Bedi’s sudden induction in the BJP and projection as the party’s chief ministerial candidate has warmed up electoral temperatures in cold, cold Delhi.

Things heated up within the party itself first, with the state BJP leaders unhappy over the foisting of an ‘outsider’, though the fires were put out early enough. Two BJP MPs from Delhi did express their concerns. “She already behaves like she is the CM of Delhi in her interactions with us,” one of them told Outlook. But by the time she hit her roadshow from Krishna Nagar, the constituency where she filed her nomination papers from, the ‘minor’ rebellions had been quelled and the show became a united one.

The salvos now are coming from the Arvind Kejriwal armoury. AAP’s chief ministerial candidate and now her chief political rival was quick off the blocks, first calling her a ‘scapegoat’ who would be later blamed for the BJP’s loss in the polls. Then he criticised her for “politicising national leaders”, in reaction to Kiran Bedi briefly placing her sash with BJP symbols around a statue of Lala Lajpat Rai. The Congress CM candidate Ajay Maken called them both opportunists and rose up to Kejriwal’s challenge for a pre-election debate, ready to deb­ate an empty chair if Kiran Bedi wasn’t willing to pick up the gauntlet.

Others fished out her earlier, not-so-complimentary tweets about Narendra Modi. (Now, of course, she says she finds his face the most beautiful in the world).  Her claim that she had towed away Indira Gandhi’s car when she was PM (“She was in power and so was I”) and that she was transferred to Goa for that too is being labelled a myth. The PM and her family were apparently abroad at the time, the challan was issued not to the driver of the car (which was apparen­tly not the PM’s but from the PM’s fleet) but to the shopowner outside whose shop the car was parked, and it was issued by a sub-inspector of the traffic police, not by ‘Crane’ Bedi. Neither was she ‘transferred’ for her ‘transgression’.

However, if there’s one thing you can’t deny about her, it’s that Kiran Bedi is made of stern mettle. The potshots don’t bother her, she has joined the BJP, she says, to take on Arvind Kejriwal. There is no doubt in her mind that she is the CM-in-waiting, flaunting files marked ‘Modi’ and ‘Governance’ in TV studios, explaining how she would govern Delhi and what she expected ‘her’ secretaries to do. In between, of course, she lauded the “nationalist RSS” on how it had worked to keep India united. She is also keeping negativity out, and how? By blocking Kejriwal on her Twitter account to begin with. She is, after all, responsible to her 3.7 million Twitter followers, “her net worth comparable only to Narendra Modi”, as a local BJP MP put it. 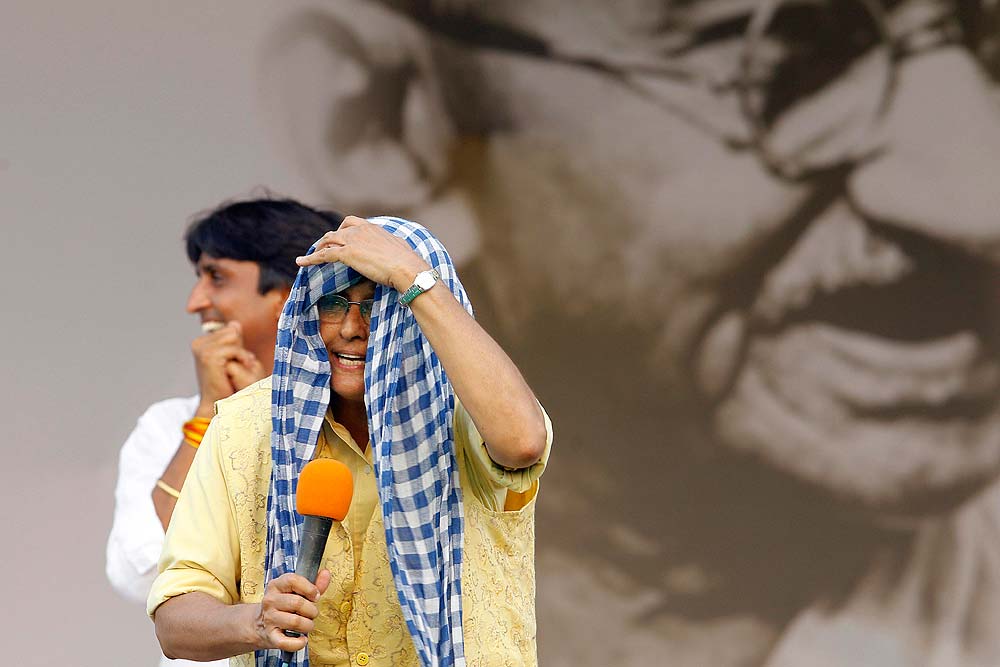 Her rift with Kejriwal began when she urged the IAC to discredit only the Congress, not the Opposition (read BJP).

Forty years ago, Kiran Bedi had become the first woman to lead the Republic Day Parade. The country is now celebrating its 65th R-Day, and this time the 65-year-old Kiran Bedi find herself in a leading role again, as the BJP’s CM candidate. The legend of ‘Crane’ Bedi is now firmly part of her old resume as ips officer; in the interim she has been a ‘social entrepreneur’, hosted the television show Aap ki Kachehri and run the NGO India Vision Foundation, among other things. It was, in fact, fellow  Magsaysay award winner Kejriwal who waged a public protest when she wasn’t appointed Delhi police commissioner. She went on leave for three months and sought voluntary retirement in 2007. At that time, former cabinet secretary T.S.R. Subramaniam had told this correspondent, “Does the government of India belong to Kiran Bedi’s father?” Why the protests, he asked. She wasn’t superseded, held the rank of DGP, and wasn’t the only one to be rejected. Four other officers were too, but they didn’t go ballistic. She didn’t do the tougher assignments either, like that of joint commissioner of crime, or traffic, or region. While others were in the firing line, she was doing cushy assignments with the UN, he added. “Bedi has a larger-than-life myth,” says a retired police commissioner of Delhi, “one she carefully built around herself.”

Another retired officer in the intelligence, who was her contemporary in service, recollects an event that he calls “serious, yet hilarious”. Having had a tiff with the staff of the then president R. Venkataraman, who was touring Mizoram while she was there, she wasn’t invited to a banquet hosted in his honour. Furious, Kiran Bedi apparently ordered the food to be spiced up. “Modi will soon have a taste of her recipes,” the officer chuckles.

The establishment, it seems, wasn’t happy with Kiran Bedi; her former colleagues in the Delhi Police too have enough reasons to dislike her. It could be pure jealousy speaking, of course, but the general view is that Kiran was not an organisation person and that her loyalty rested with her own self.

Interestingly, AAP and Congress sympathisers have been trying to lay their hands on the report of D.P. Wadhwa, a sitting judge of the Delhi High Court, who had indicted Bedi for beating up lawyers in Tis Hazari in 1988, leading to a 90-day strike in all district courts. “The file has gone missing for the last few days and is likely to resurface only after the polling is over in Delhi,” says a joint secretary in the home ministry.

A senior Congress leader, who dealt with the leaders of India Against Corruption during their agitation two years ago, says Bedi was never part of the IAC’s core group like the Bhushans and Kejriwal; Anna Hazare was clueless. Kiran, he says, was the bigger crowd-puller at the time. “She would often ask me what transpired in the meetings with the government (to which she wasn’t invited),” he recollects. Pausing pensively thereafter, he adds, “She has all the bad traits of Modi and Kejriwal together.”

Had Kiran Bedi had her way, AAP would have been reduced to BJP’s B-team long ago, before its electoral debut. Her rift with Kejriwal began when she urged IAC to discredit only the Congress, not the opposition (read the BJP). “Bracketing the Opposition right now when they are already atta­cking the ruling party will benefit only the party in power,” she had said.

Kejriwal by then had charted his own political course, forming AAP in November 2012, and making a striking chief ministerial debut in Delhi a year later. After waffling for a bit, Kiran Bedi threw in her lot with Anna, and was by his side at the second edition of his fast at Ralegan Siddhi. By then AAP was already running away with the script. By the time the Lokpal bill was passed on December 18, 2013, Kejriwal was on his way to becoming the Delhi CM, dismissing the Lokpal as “joke-pal”. Kiran Bedi & Co declared themselves satisfied, she was seen waving the national flag atop the podium when Lokpal came into existence. It’s a different matter that the said Lokpal is yet to be appointed.

Meanwhile, Kiran Bedi, like other IAC footsoldiers (Baba Ramdev and Shazia Ilmi among them), has had “a change of conscience”. Prime Minister Modi welcomed her and tweeted a picture with her and party president Amit Shah of this long-overdue ghar wapasi. She is the BJP’s trumpcard, touted as one who will  ensure a landslide victory for the party. Shah wants nothing less than 60 out of 90 seats. In UP and Bihar, he has mana­ged to make the improbable probable. Could Kiran Bedi be his undoing?

The Potomac Flows By The Yamuna