As Drones Target The Baarat

Skype, hashtags, Snapchat Geofilters, apps and others fill up a cartonful of tech that has infused a new tradition of modernity in weddings 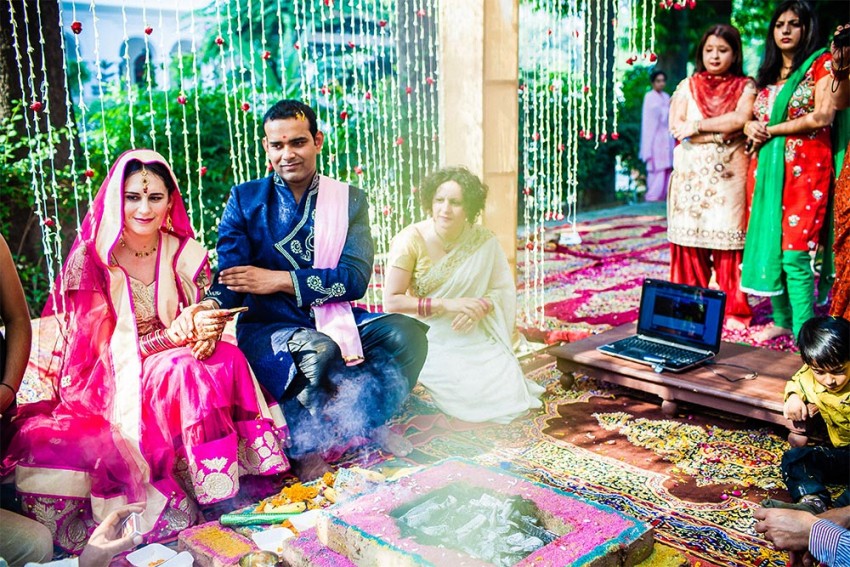 Beyond The Mandap
An Australian couple at their wedding in Baradari Palace, Patiala, Skype their phera ceremony to friends and family
Photograph by Ramit Batra
Stuti Agarwal October 13, 2016 00:00 IST As Drones Target The Baarat 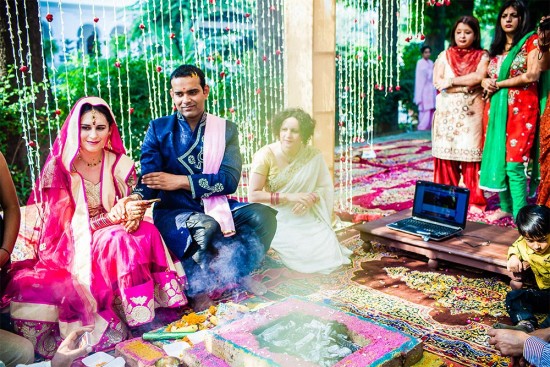 Priyank Prakash is getting ready to attend his friend’s wedding. Close shave? Check. Hair gel? Check. Crisply ironed shirt? Check. Then, he reaches for his bermudas. He is all set. He strides across his room in Bangalore and sits down  at the table, opens his laptop, logs on to Skype, and presents his impeccably dapper upper half to the bride and groom at their phera ceremony. Priyank is attending their wedding, in Delhi, ‘virtually’. He even managed to get a gift delivered to the happy couple almost in sync—through a Paytm cash transfer.

Around 5,600 kilometres away, somewhere in South Korea, Satyajit Singh is doing just the same thing—‘attending’ his favourite cousin’s late-night sangeet ceremony in Delhi. The FaceTime session organised by the wedding planners—a rounded tour and talks with all guests, for all the functions, is as good as it gets when you cannot get leave from work, or afford the expensive trip.

Priyank and Satyajit aren’t solitary geeks who have further bent a technology alr­eady wired for sociability. “Video calling has bec­ome a norm for everyone who cannot attend a wedding physically but wants to,” says Ankit Bhargava, co-founder of destination-wedding planners Regal Weddings. Then there is live webcasting for all those social-media hounds. “With 4G kicking in, connecting cannot be quicker, and a large percentage of people like to share on Facebook, YouTube, and the rest of the pack,” says Mehak Sagar, CEO, Wed Me Good, planners and vendor discoverers. For Clayton Menezes and his wife Jennifer, who both wanted a small, close affair, live webcasting was the best way to include their friends and family who weren’t present. “Having a destination wedding meant a small gathering, and we wanted to let everyone be part of our celebration. Facebook Live is simple, I arranged it myself on my phone in less than 15 minutes,” says Menezes. He did manage to make all the arrangements, but the on-and-off 4G-signal strength in Mysore did not allow uninterrupted webcasting. “The best way to ensure good webcasting is to work with WiFi. We set up tablets around the location, all of which capture the event on videocam, and have a person working on the feed to webcast the best,” says Jimly Gogoi, of VMukti Solutions, one of the few companies dedicated solely to live webcasting and video-calling. Ramit Batra, a destination wedding photographer, rec­ently shot a wedding overseas at which all major rituals were webcast. There were Skype sessions too. Bhargava even mentions a device attached to a tablet that allows the tablet to be moved around, and everyone gets to make video-calls. Those not physically present can interact with guests and soak in the festivity.

Menezes, also a web-developer, developed his own wedding website. “A place where our stories, pictures and videos come together,” he says. The couple wanted to invite everyone to the starting line of their journey, had the website link printed on the wedding invitation and uploaded to their social media profiles, so everyone could see and comment. “Easy access for all things of a wedding is the latest, and websites and apps are the best way for it,” says Vishesh Grover, director, World of Wedding, a wedding vendor discovery portal. Everything you need to, or want to know about the wedding is available on these websites and apps, which usually have simple interfaces that last a few months from, and after the wedding. “It’s not just information. You will get a rem­inder for all the functions and maps to reach the location too,” says Sagar.

Apart from electronically controlled fireworks that are safer, guests are given headphones to jive to music, thus bypassing restrictions on noise.

Another way of tapping technology to create common boards for a wedding is hashtags. “Almost everyone uses them now, and we weren’t any different,” says Abhisehk Maurya, who created a common hashtag for his wedding. Clayton too had #clayjen. Then there are Snapchat Geofilters, which offer the guest yet ano­ther chance to enjoy being part of the wedding. A Geofilter is a special screen marked with a Geofence or banner of your choosing which will be available for use for all guests present at the venue. “One can access the Geofilter by swiping left after clicking a picture on the app; it’s like pre-added text,” says Devika Wadhawan, who recently used it at a friend’s wedding. While hashtags are free and work for both Instagram and Facebook, Snapchat has minimum charges for Geofilters based on the size of Geofence. Like websites and apps, details of hashtags and Geofilters are often printed on wedding invites, which also have now gone through their own technological makeover.

“Paper is still the traditional way, but it is now usually accompanied with e-invites,” says Sonal Agarwal, co-founder, Turmeric Ink, a wedding invites designer. There are video invites for closer relatives and friends, or e-cards, and the usual paper cards for others. “We are doing both—the cards being sent by our parents, and the e-cards, by us to our friends,” says Srishty Chawla, 23, who is busy making the final arrangements for her October wedding. Tanvi Maheshwary didn’t go through the “hassle of paper”, as she calls it. “Everyone is busy now and to send out over 100 cards, which may or may not be received, is a headache. I des­igned a simple one myself, and sent it to all,” she says. However, for others who may still want to go the postal way, technology has a play there too. “Of late, we’ve been doing cards which have tiny screens in them, with a video invite from the family, and a GPS. There are many who have given out not too expensive tablets with designed back covers,” says Agarwal. 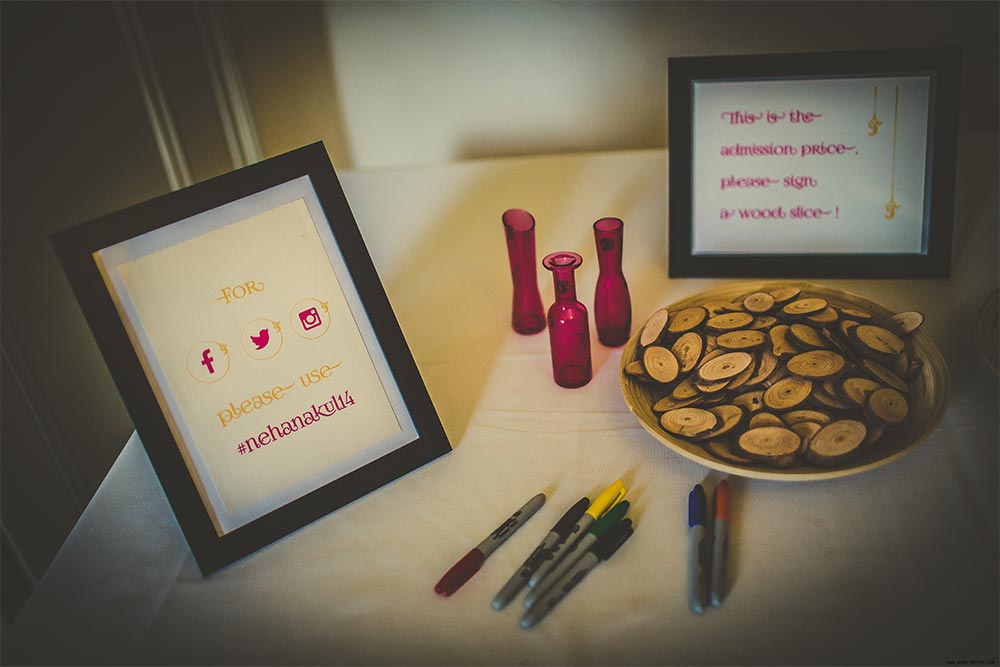 Personalised wedding hashtags are printed on invites, displayed at venues

There will soon be little surprise, if, along with the invite, you also get a link for an online gift registry website, a trend from the West that is quickly catching up. “I am definit­ely sending links for my page on an online gift registry website to all my friends,” says Chawla. The couple can choose from the gifts available on the website and make their own page, which can be sent to the friends. The friends can then buy off the page. “That way I get what I want,” says Chawla, and not end up with a dozen coffee makers. Although many still believe that the traditional cash or gift at the reception may be the proper way, coupons from stores, whether online or offline, are the in thing. Added to the gift list Paytm cash transfers, which are quickly picking up.It does not stop at all this. Technology’s nimble hand is at work everywhere, beginning with the pandits who bring a rishta, and help decide the dates. “We now have an app where you key in the date of birth of the boy and the girl, and in a blink you have all the information you need to know—charts, gun etc,” says Acharya Vikas Kaushik of Venus Astroscience. He even sees the use iPads when meeting families and suggesting matches. “Photos, CVs, and even introductory videos are all there,” says Kaushik. All the basic research and connecting done by the planners is online. “There’s hardly any need to meet clients anymore. We have Whatsapp and Facebook groups where we, along with the couple and their family, decide on everything. We chat, share presentations and videos, get suggestions and fin­alise things—all online,” says Bhargava.

Filming marriages too has changed. “What began with photography went to videography, and now how we do that has changed too. Most clients want drone footage, and now with 360 degree view available—with multiple cameras attached to a drone—no one wants a single camera shoot either,” says Rishabh Sood of Candid Tales Company. Likewise, tech has coloured the finale of weddings too. Apart from electronically controlled fireworks— “they are simpler, safer, and can be used to make better patterns,” says Maheshwar Srivastav of Majestic Fireworks—guests are being given headphones for them to jive to rhythmic ear-splitters. “For all the after-hour partying, which is banned,” adds Sagar. Silent parties, as they are called.The Indian wedding market is estimated at over a humongous one trillion Rupees, and with its growing at over 25 per cent, the future for further infiltration of innovative technology in it is guaranteed. “Technology in wedding is here to stay,” says Grover. He believes the ubiquity of social media, the awareness and need for it among people, and higher disposable incomes ensure that weddings henceforth will be inextricably hitched with technology. All the rituals in an Indian wedding remain traditional, but the way to see and experience them has become the stuff of fantasy films of recent vintage.

More weddings are exchanging the swastika for the ubiquitous hashtag

‘Social Media Is Here To Stay And Evolve’