Home  »  Magazine  »  National  » New Path »  As DMK Chief, Stalin Has To Keep His Flock Together

As DMK Chief, Stalin Has To Keep His Flock Together

As DMK chief, Stalin has to keep his flock together, set an agenda and meet challenges 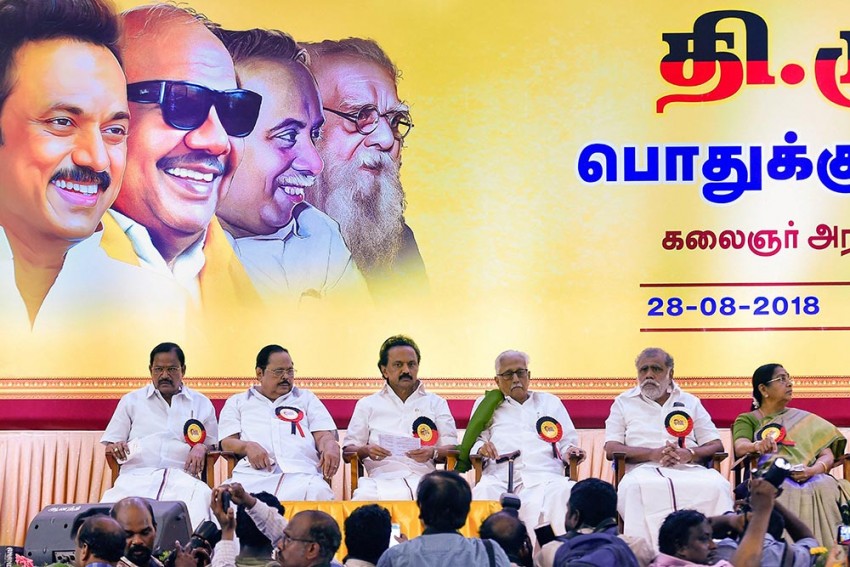 Stalin with DMK leaders at a meeting where he was elected party president
Photograph by PTI
G.C. Shekhar August 29, 2018 00:00 IST As DMK Chief, Stalin Has To Keep His Flock Together 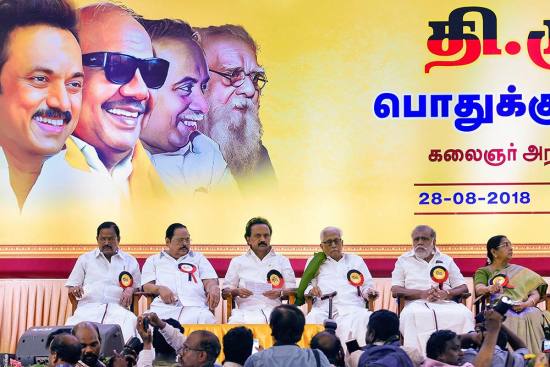 The large poster which served as the backdrop on the stage says it plainly—a fourth profile had been added to the now familiar triumvirate of Periyar, Anna and Karunanidhi that used to be the DMK’s trademark canon. M.K. Stalin had been added to that poster, somewhat similar to a new superhero being added to the Avengers team.

Stalin’s unopposed election as DMK president on August 28, though, has never been in doubt. In 2014, when his cha­­llenger, elder brother M.K. Ala­giri, was expelled from the party, the name of K. Karunanidhi’s successor became clea­rer. In 2017, when Kalaignar’s illness saw his enforced retirement, Stalin was made the working president, in a newly created post. Anointed heir apparent thus, beco­ming the DMK president after his father’s demise remained a mere formality.

Stalin (65) and his supporters know that he cannot emulate his father. He nei­ther commands the historical connect with the people that Karunanidhi enjoyed, nor the intellectual intensity of the multifarious artist that Kalaignar was. The one trait that Stalin has imbibed from his father is his penchant for hard work. Known to be a tireless traveller, Stalin has often carried the election campaign of the party on his shoulders.

“There can never be another Karuna­n­i­dhi—even Stalin knows that. He needs to create his own leadership style while carrying everyone with him as his father used to. First, he has to strike a balance between the old guard and the younger leaders before rejigging the set up as per his wish,” observes a senior DMK MLA.

The DMK must attract the youth; it’s seen as a party of older people. Stalin must promote young leaders, not just his family members.

The DMK’s biggest challenge has been to attract the youth. It is still viewed as a party of middle-aged men and women. Stalin has tried to engage today’s generation through social media, but it has rem­ained a half-hearted attempt. He must urgently bring younger DMK leaders to the forefront and not only promote family members like his son Udhaynidhi or son-in-law Sabareesan. While Karuna­nidhi’s longevity, decades-long leadership and peerless prestige ensured there was little opposition when he promoted his two sons and daughter in politics, Stalin will not enjoy a similar leeway.

Ever since the January Jallikattu pro­tests the counter-narrative in the state had been hijacked by fringe groups. The DMK and other opposition parties had to reluctantly toe their line. The opposition space has also become crowded with the arrival of Kamala­ha­asan and Rajnikanth. So, Sta­lin has to start shaping the state’s political agenda as befits a major party, rather than let a T.T.V. Dhinakaran or maverick actor-­poli­tician Seeman take centrestage.

With a malcontent and sidelined  Alagiri making ominous noises, the other challenge to Stalin is expec­ted from within the family. His warning that the DMK would pay a huge price by not readmitting him and his planned show of strength through a memorial rally for his father on September 5 has to be countered effectively. If Stalin could convince the dissidents in the DMK not to rally behind Alagiri, thus rendering his show a dud, he will have scotched much of the opposition.

However, Stalin is displaying fle­xibility by not putting all his eggs in one basket. While he is firmly with the Con­gress for the Lok Sabha polls, he may not be averse to a post-poll tie-up with the BJP if it is closer to a majority and seeks numbers from outside. By attending Vaj­p­­ayee’s funeral, paying homage to his ashes at the BJP office in Chennai and inviting BJP leaders to Karunanidhi’s mem­­orial mee­ting on August 30, Sta­lin’s moves have a pragmatic ring about them. Having been out of power at both the state and Centre, Stalin hopes to fill at least one blank in 2019, considering the EPS government lasts its full term till 2021.

“Stalin’s real challenge would be to make the DMK truly a party of have-nots, taking it to the youth by truly democratising it and winning elections not through money and freebies. He should be careful not to repeat the DMK’s past mistakes and should provide a clean administration if and when the party comes to power,” observes political commentator R. Kannan. Sta­lin has had a long apprenticeship; the DMK’s fate hinges on his political nous.