As Awkward As A Cow On A Crutch

What happens when a cow is turned into a question paper? There were 11,000 candidates answering the question, and the poor bovine had to face the heat. 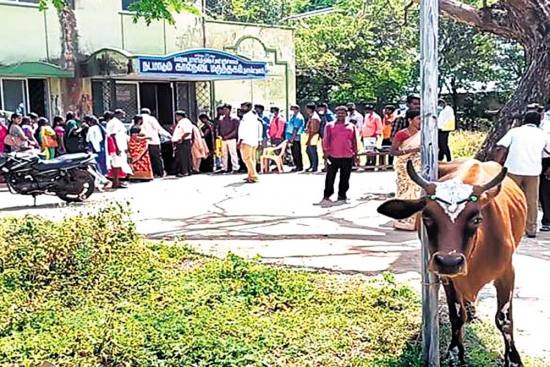 This may be the season for cattle cabinet and cow syllabus, but one poor animal had a torrid time in Tamil Nadu as an object of study. Manya was tied to a pole outside the animal husbandry office at Nagapttinam on February 25, had to stand under the hot sun for over eight hours as it was examined by 1,100 candidates as part of their interview for field assistants in the department. Over 4,800 people had applied for 41 posts in two districts. Since these assistants handle cattle at state-run animal clinics, they were tested—the confidence when they approached the bovines and how they examined their teeth and udder.

As the day progressed and one candidate after another was tested, poor Manya was exhausted. Not even a bucket of water was provided to keep her hydrated. Cattle experts pointed out that cows being shy animals should not be approached by an influx of strangers and handled by them repeatedly. “So many persons touching its udders without properly washing them and cleaning their own hands would only increase the risk of infection for the animal and humans,” says Janaki Raman, president of the local cattle raisers association. A few candidates played it safe by bringing their own hand sanitisers. After Manya’s ordeal was reported in a local daily, authorities lined up three more cows for the next two days and ensured sufficient shade, water and fodder.