As A Void Vanishes

Finally, on April 7, it all ended well. Can the borders be now more porous, warmer? 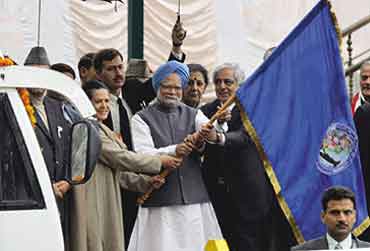 outlookindia.com
-0001-11-30T00:00:00+0553
The gunshots on April 6 in the heart of Srinagar may have sent shivers down many spines. Two militants had attacked the Tourist Reception Centre where the passengers on the Muzaffarabad bus were put up. Luckily, all the listed passengers escaped. Eight did pull out of fear. But despite the death threats from the militants, the people in the Valley did not give up hope. The reopening of the road was something many had dreamed of and prayed for. And as the passengers from both sides of the LoC reached their destination, there was a sigh of relief across Kashmir. Despite what the sceptics had said, the first step had been taken. For many it was an emotional moment. Almost a new dawn.

The bonding between the people of the two Kashmirs shone through when thousands braved the rain to greet the passengers from PoK at the border town of Uri. They lined up on either side of the road. And shouted slogans welcoming the visitors from across the border. The emotions were similar in Srinagar when the visitors reached the city. And the welcome given to the 19 (an old couple got off en route) on the bus from Srinagar in PoK was equally warm.

Indeed, the number of relatives and friends seeing off those who were lucky to be on the historic bus to Muzaffarabad had to be seen to be believed. Like Mohammed Nasiruddin Khan. Not even when he left on his Haj pilgrimage two years ago did so many neighbours turn up to send him off. They filed in through the high gateway, either folding him in a long embrace or squatting on the lawns at a respectful distance, but nearly all of them gave something for him to carry on his journey—a letter, a parcel or merely a message of a few words for relations they haven't met for half a lifetime or more. "Just the letters alone weigh over three kilograms," laughed Nasiruddin as he jotted down the many forwarding addresses in a brand new diary. All Nasiruddin is carrying with him is a small suitcase and a briefcase, both of which have been packed for days now, with gifts for his cousins, nephews, aunts and uncles, all of whom he will be meeting for the first time.

Nasiruddin was only eighteen months old when he came on the same road with his widowed mother and little sister to live with their aunt in Bijhama-Uri village of Baramulla district. And although they can glimpse the PoK from their backyard—it is barely 16 km as the crow flies—neither Nasiruddin nor his mother could make the trip back to their hometown before. "Ammi's last wish was that her coffin should be sent back to Muzaffarabad whenever that was possible," recalls Nasiruddin. "And when I went on the Haj, my one prayer was that I'd be able to go back to Muzaffarabad by this road before I die." 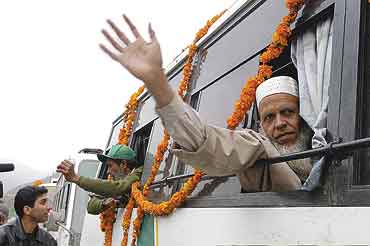 His wish came true when the government began issuing forms for those who wished to travel by the new bus to visit their relatives. There were so many applicants for so few forms—nearly two thousand people queued up for 40 forms in Baramulla alone—that in the end, officials decided to go in for lots, according to dig, Baramulla, Raja Ayaz Ali. Ali's own mother, who came from Muzaffarabad as a new bride, didn't manage to get a seat. "I told her to wait a while, and then there would be so much traffic on this road that she can take a whole busload of grandchildren across the border to her hometown," says Ali.

Others are waiting as anxiously to catch the next bus. Naeem Khan, his wife, sister and two children stood in the queue for two hours in Srinagar on the day the forms were being issued. "The forms were being sold in black," says his sister Nasreen, "and all we got for our pains was lathi blows from the police." Of Nasreen's siblings, a sister and brother are on the other side of the LoC—khoon ki lakeer (line of blood), as it's called here—while she lives here with two brothers and their families. For several years, even her father, who had gone to visit an ailing sister, was stranded on the other side."My mother died pining for him," she says, "but my father couldn't return even after she died, although before Partition he made that journey by tonga in less than three days". Adds Naeem Khan,"Even if we want to call them, I can only do it when I go to Delhi." 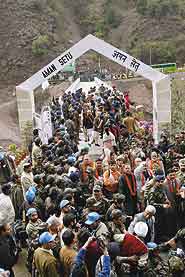 The enthusiasm for the reopening of a road that was first built in 1890 goes beyond the several thousand families separated by a border that was not of their doing. Thirty-year-old railways contractor Rafiq Ahmed Ilahi, for instance, has no relations he knows of across the border. "But all Kashmiris have this dream of visiting PoK, we've heard so much about it and during militancy half the youth fled there. If I get a chance, I'll definitely want to go and see what it's like."

As a confidence-building measure, there couldn't be a better start, as Ashraf Patoo, a houseboat owner says. "Since they are born, Kashmiris have been wondering what's on the other side. Open the road, and people will see for themselves. It's politicians who've made this mess in Kashmir, and if people manage to build bridges across the border, politicians will be sidelined."

Politicians like Hurriyat's Syed Shah Geelani are afraid there may be some truth in what Patoo says. "It's a clever ploy by the Centre to sideline the real issues. The root cause of Kashmir's dispute with the Centre is not being addressed, instead they are hoping to push it to the backburner by promoting such fake issues like the bus," he told Outlook. "They want to bargain with Pakistan to make the LoC the permanent border."

Srinagar-based human rights lawyer Parvez Imroze agrees: "We are angry with the way the government is treating what is after all only the first step in the peace process as a victory march." And even as first steps go, Imroze believes the bus is the wrong way to start. "By starting the bus service, the government is sending a message to the world that everything is OK here, that there are no more human rights violations in Kashmir. But in the last two years alone, there have been 148 more persons that have gone missing. Instead of starting a bus service, they should have done something to acknowledge what Kashmiris have gone through in the last two decades."

Parveena Ahangar's teenaged son, Javaid Ahmad, is one of the nearly 10,000 persons who has been missing since trouble started in the Valley. "When I see Srinagar lit up to welcome the reunion of divided families, I feel like crying. Why don't they think of uniting us with our missing sons?" Parveena's son was picked up by three securitymen fifteen years ago, and despite appeals to courts and hunger fasts, Parveena has never been able to discover what really happened to Javaid.

There are others who are hurt and humiliated by what they perceive as the government's insensitivity to what they've been through. As a young Kashmiri, Zahir Ahmed, says: "When 80,000 people have already died in the struggle, how can a bus make any difference?" Zahir's father, brother and uncle have all died in the 18 years of militancy, forcing him to give up his college in the second year of BSc, and open a tailoring shop to keep his remaining family alive.

But there are many in Srinagar—a city growing bravely out of the ashes of its past, with tourism looking up, mushrooming private schools and colleges, suburban homes rivalling those in most metros—who believe it's time to put away the past, and the bus is one way of doing this. As Patoo says: "No Kashmiri can ever forget all those who have died in this toofan, but at 55, I can at last hope that the next generation won't suffer like we have done."

But the problem with the bus, many agree, is not that it's not a great idea, but with its poor timing. "They should have talked to people, got as many people as possible to support it, instead of just trying to shove it down people's throats.People want peace, but they also want an honourable way out," says Yusuf Zafar, a trekking guide and owner of a fleet of trucks who has been reduced over the last 15 years to take what little work he gets as an interpreter for international agencies.

Yet, there are many for whom this is not the time for cynicism. The question of blood ties is too real and overpowering for hope to be dispelled. Till Wednesday, Mehbooba Nighat's family was busy preparing for the grand family reunion. Three nephews that Nighat has never met were expected by the bus, but dropped out at the last minute because of their father's sudden illness. "So what if they're not coming by this bus. Now they can come anytime. For me, even without my nephews on it, this bus is a dream come true. It will change everything."

By Sheela Reddy and Zafar Meraj in Srinagar