Democracy and secularism get a new life in Bangladesh, courtesy a Supreme Court ruling 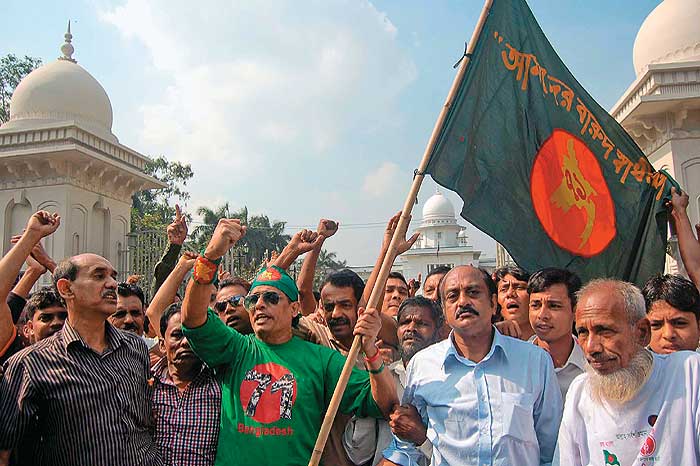 Large sections of Bangladeshis have often rued the loss of the “spirit and letter” of the Liberation War that had helped them emerge as a new country from East Pakistan 39 years ago. A series of military rulers from the mid-1970s till 1990 had inserted or deleted provisions in their constitution to legitimise their regimes, or those they supported, resulting in the dilution of the basic tenets the country was founded on.

But a Supreme Court ruling late last month, hailed by thousands as a “landmark judgement”, has now handed Sheikh Hasina’s Awami League government an opportunity for a major course correction. If it brings the required amendments to the constitution, it can not only stop military rulers from coming to power in future but also restore the secular character of the nation.

The original constitution of Bangladesh, which came into being within a year of the country’s birth in 1971, had chosen democracy, nationalism, secularism and socialism as the four basic guiding principles of the nation. But after the assassination of the country’s founding father, Sheikh Mujibur Rahman, in an army putsch in 1975, a series of military officers took turns running Bangladesh. And it was in 1979, in the second year of Zia-ur-Rahman’s presidency, that the 5th amendment was incorporated in the constitution to legitimise his rule. In subsequent years, however, it provided other generals the perfect legal cover to run the nation.

On July 28, a six-member bench of the appellate division of the Bangladesh Supreme Court ruled the controversial 5th amendment to the country’s constitution to be illegal and nullified it. “We are putting on record our total disapproval of martial law and suspension of the constitution or any part thereof in any form,” the SC said in its ruling.

The court also restored Article 12 of the constitution which prohibits religion-based politics and communalism in all forms, and which Zia had deleted. The SC in its ruling said that by “omitting secularism”, one of the basic principles the country was founded on, the military rulers had “destroyed” not only one of the bases of “our struggle” but also changed the “basic character” of the republic.

The ruling Awami League, predictably, has been elated by the SC’s ruling. “The amendments that were enforced by military rulers during their misrule have been declared illegal and repealed by the Supreme Court,” law minister Shafique Ahmed told Outlook. He said there was no hindrance now to reinstating secularism in the country’s constitution.

Following the apex court’s ruling, the Sheikh Hasina government has set up a 15-member committee comprising members from different parties to look into the amendments.

The Awami League and its grand alliance enjoy a clear majority in the parliament with 263 out of the 300 seats. The League itself has 230 seats in the ruling alliance. The Bangladesh National Party, which was founded by Zia and is now run by his widow Begum Khaleda Zia, has only 30 seats, while its alliance partners from the Islamist parties, including the Jamaat-e-Islami, have just three seats. Independent members make up the remaining four seats.

If Sheikh Hasina wants, she could easily amend the constitution and restore the original tenets on which it was based in parliament, since her grand alliance enjoys an overwhelming majority in the House. But questions are being raised in various quarters in Bangladesh on how far she is willing to go.

The declaration of the 5th amendment as illegal by the SC definitely helps her prevent future military rulers from grabbing power. But the apex court has also created a scenario in which she could even ban religion-based political parties from contesting elections in the country. If she does that, it surely would break the alliance of the main opposition party, Khaleda Zia’s BNP, and also jeopardise its chance of putting up a meaningful fight against the League in the coming years.

The League government has already launched a drive against those involved in war crimes during Bangladesh’s liberation struggle. As part of this, four senior leaders of the Jamaat-e-Islami have been arrested and now await trial for their crimes “against humanity”.

The Jamaat has already criticised her move to revert to the 1972 constitution. “People want to move the country forward. But the government is trying to create impediments for its progress and development,” says the acting emir of the Islamist party, Makbul Ahmad.

There are clear indications, however, that the Jamaat is losing ground in Bangladesh. The party’s standing in parliament has come down from 15 to two seats as a large number of voters in the 2008 elections, particularly women in rural areas, fed up with its push for strict adherence to Shariat law, had turned against the Islamist outfit.

However, the BNP, which had lost heavily in the last elections, has decided to remain silent and watch carefully the evolving scenario in Bangladesh.

But Sheikh Hasina also has a former military ruler and an Islamist as a coalition partner. Husain Mohammed Ershad, a former general who replaced Zia in 1979 and ruled Bangladesh for close to a decade, is now an ally of the government with his Jatiyo Party having 27 MPs. It was Ershad who during his rule had rewritten the constitution and made Islam “the state religion” of the country.

Despite its landmark ruling, the SC has not dealt with this portion of the constitution that Ershad had incorporated. Sheikh Hasina has made it clear in parliament that she was not willing to change Islam as the state religion nor is she in a mood to ban religion-based parties. This has obviously led to dissatisfaction in the secularist camp.

Shahriar Kabir, who has been actively campaigning for trying those responsible for war crimes and restoring the secular credentials of the country, is one of those who is less than elated with the government’s ambiguity. “The prime minister’s statement has confused the nation and it seriously contradicts the verdict of the Supreme Court. It seems the war criminals have nothing to fear any more,” says an agitated Kabir.

Many in the Awami League perhaps share his views, but if Sheikh Hasina has decided to move with caution, so will they. Because few doubt that Bangladesh is now in the cusp of history. 4

It’s A Soliloquy Of Stones