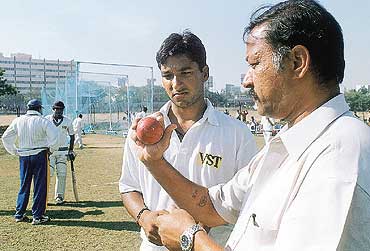 outlookindia.com
-0001-11-30T00:00:00+0553
Arjun Yadav, 21, batsman and off-spinner: Strapping 5 ft 11, Arjun claims he is a good inch taller than "Dad" but has several other heights to conquer if he wants to emulate the feats of father Shivlal. Member of the victorious World Cup under-19 team and regular in the Hyderabad Ranji side, "Junu" aims to play for India in the next year or two.

This is one son who finds it more hindrance than help to have a father who is a national selector and former chairman and chief selector for the Hyderabad Cricket Association. "There is always that extra burden to doubly prove myself," he says. Which he seems to be doing, having notched up 425 runs in his first five Ranji matches, including 155 against Goa. His Ranji coach and former India player Arshad Ayub claims he is one of the best young prospects in the Hyderabad team: "He has matured a lot over this last season and is much more focused on his game."

Being only seven when Shivlal played his last match for India, Arjun has only watched his father turn out for the country on video. "Dad was a very gutsy and mentally-tough cricketer and I want to be more like him." Shivlal was a superstitious player and always visited the Ganesha temple before his matches, a tradition his son is keeping up. Meanwhile, what Arjun really looks forward to are the rare Sunday mornings when father and son are in town and Yadav Sr spends a few hours bowling to him.

The young man has clear objectives—either wear the India cap in the next two years, or focus on getting an MBA and finding a job. His mother Revathi makes sure that the third year B.Com (Hons) student pays as much attention to his books as he does to his cricket. "He can skip a match if he has to but he must sit for all his exams," says this masters degree holder in Biology. Shivlal agrees, because Arjun is a "good student".