As Mangal Pandey is glammed up for celluloid, it's time to do a reality check 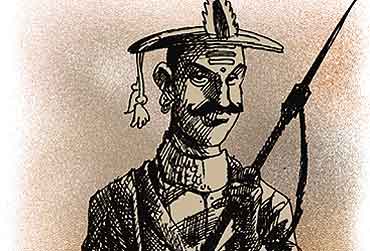 outlookindia.com
-0001-11-30T00:00:00+0553
India is two years away from celebrating the 150th anniversary of 1857, the first war of Indian Independence. Earlier generations recognised the event as the bloodiest revolution in human history, a momentous epic, a war of civilisations even. But fifteen years of liberalisation appears to have dulled our senses. When new perspectives on 1857 ought to be emerging, Indians are squabbling over the birthplace and other minor issues about Mangal Pandey, the first sepoy who pulled the trigger that ignited a whole country.

Aalha Mangal Pandey, an Awadhi ballad, the Oudh Gazette of 1861 and other literary and oral sources attest to the man having been born into a peasant Brahmin family in Faizabad’s Akbarpur tehsil. As a people who saw themselves at the apex of the Indian moral order, Brahmins were orthodox and radical, capable of backing a good order but also sanctioning revolution against a bad one. The year was 1827—a time when William Bentinck’s reforms ended a phase of active British-western appreciation of things Indian.

The British East India Company had started flexing muscle right after Robert Clive’s 1757 victory at Plassey over Siraj-ud-Daula. By 1818, it was the paramount power, having defeated the Marathas and Tipu Sultan. But a crucial difference separated the 18th century conquests from 19th century ones. Earlier, the British had adopted loot, plunder and monopoly as a policy, but their basic aim was to trade and market Indian goods abroad. Indian industry, therefore, was not destroyed. By the 19th century, the industrial revolution had swept England. It was now important to sell British goods and destroy ‘Asiatic’ competition. Free trade was employed as an instrument to break Indian industry’s back.

Mangal entered the East India Company Bengal Native Infantry (BNI) in 1849. It was the sort of time where the old was dying but the new was yet to be born. British officers who earlier mingled with sepoys, wrestled with them and attended ‘nautch-girl parties’ were becoming rare. The racist concept of an inherent white Anglo-Saxon superiority was encouraged.

Mangal was a ‘new’ sepoy—passionate and sturdy, he was largely free from the ‘true to British salt’ sentiment of his seniors. Traditional and progressive at the same time, this new breed was witnessing an amazing revolutionary configuration of political and cultural conditions.

In recruiting a professional army from amongst the Indo-Gangetic belt peasantry, the British had unwittingly empowered a whole class. Recruited from Haryana, Awadh and Bihar—the very core of the Indian landmass—sepoys were peasants in uniform. In history, peasant revolution signifies an anti-feudal upsurge—here it took on an anti-colonial tone.

Mangal’s initial years in the BNI were not free from anti-British ideas. The Awadhi sepoy had a Muslim friend, Nakki Khan, the son of a maulvi. Nakki was against Mangal joining the sepoy army. According to him, red-coat sepoys killed Indians; Mangal promised he would not lift a finger against his own countrymen. He, however, felt heavily compromised—by the 1850s, the Company had completed foreign conquests and was now quelling internal revolts. The sepoys were doing police duty.

The 34th BNI, Mangal’s unit, was employed along with the 19th BNI during Awadh’s annexation. Sepoys were reported to have gone personally to Wajid Ali Shah and wept. Assuring future support, the wily king advised caution—he also asked for time to plan passive anti-British resistance in the first phase.

Mangal was much disturbed by Awadh’s annexation. Through Nakki, he came to know of an underground current: the Waliullah stream, in which the British saw Wahabi strains. Initiated by Shah Waliullah, the 18th century Delhi maulvi, it had a simple thesis: the Mughal empire had collapsed because big mansabdars eroded it from within. Peasants, shopkeepers, traders, the middle and working classes became disenchanted, leading to revolts and dissension; the only way to revive the empire was to change its basis and empower the peasantry.

Followers of Waliullah had unleashed peasant movements in Punjab and Bengal. They were now concentrating on the Gangetic belt. Through Nakki, Mangal also came to know of an aborted plan to overthrow Company rule with Raja Kunwar Singh of Bihar at its head during the Anglo-Sikh Wars of the 1840s—he was amazed and perplexed. It’s unclear where Mangal got the idea of ‘sepoy power’—Sitaram Pandey’s Kissa Pandey Ka, a post-1857 tract written by a pro-British sepoy, mentions how taaqat ka nasha, the alluring vision of power, had rendered the new recruits mutinous.

There was also a parallel initiative led by Azimullah Khan—Nana Saheb’s dapper, English-speaking secretary—intended to mobilise anti-British rajas and nawabs. He too was propagating the idea of ‘sepoy power’. Rajas and nawabs were to play a secondary, largely ceremonial role in this venture.

The incident at Barrackpore, where Mangal pulled the trigger on a British officer, marked the culmination of his development from an angry young man to a politically conscious revolutionary. Aided by funds from Nana Saheb, Wajid Ali Shah and the Waliullah network, the initial plan was to ignite sparks in Bengal. Mangal was in touch with Bengali zamindars and a Brahmin activist named Mukhopadhyay. He was also in love with a married woman, the wife of a Bengali clerk, derided by sepoys as British hirelings.

The greased cartridge issue shot suddenly into prominence. Lord Canning himself suspected that to cut costs, the Company was using paper greased in cow and pig fat. Mangal, however, saw this as a great opportunity—the cartridge issue brought out the fear of conversion. Religion was being used by the Company as a conscious imperial tool. Statements by contemporary missionaries like Rev M.A. Sherring show that the British understood one basic fact: it was impossible to conquer a nation like India without breaking its cultural-religious back. In India, as elsewhere, culture and religion were linked to self-respect, identity and dignity. The British were seeking hegemony—theoretically, the Company was still a vassal of the Mughal emperor. For Mangal, sepoys were not baaghis or rebels—they were only correcting a distortion where the servant (read the Company) had usurped legitimate authority (read the Mughal emperor) in praxis.

A more specific point of conflagration could have been Lt Wheeler, a officer in Mangal’s regiment employed to evangelise the sepoys, with whom he had a huge altercation. Wheeler was so controversial, the Company itself had passed strictures against him. February saw sepoys at Behrampore refusing cartridges; incendiary incidents were reported from Ranigunj, Dum Dum and Barrackpore. Telegraph lines were cut. But the Bengali zamindars did not respond. Nakki planned to bring a peasant army from an East Bengal Waliullah-ite base. He also contacted Peer Ali, leader of the Patna Waliullah-ite group. All this presaged the Meerut pattern of linking military and civil rebellion. 1857 was in fact a layered mass movement: underground and open, militant and covert.

The British, however, were alert—hard bargaining put the Behrampore rising off—then Mangal and his comrades tried arousing the Barrackpore sepoys. It was apparent, blood had to be shed—those familiar with Gangetic belt traditions know what an open call to arms means—to provoke people a lone martyr comes out on the streets and challenges his opponents. On 29th March, Mangal did exactly that—he followed the blueprint not of an opium addict but a conscious, highly charged avant garde element.He completed his duty as a Brahmin and an Indian in a way intelligible only to Indians.

Till Mangal’s act, the anti-British movement had no face—by loading his musket, shooting at British officers, he implanted a rallying banner.

No historian has tried to analyse Mangal’s action or how he defeated two British officers in sword combat. In this sense, Mangal Pandey has to be read backwards as a prelude to 1857, which combined the sword and the gun for Indian freedom.

(The author has recently published a book on Mangal Pandey)

In The Shade Of The Banyan