Arise From The Clay Earth

Let our cities reflect the new age. Let there be a Taj for today. 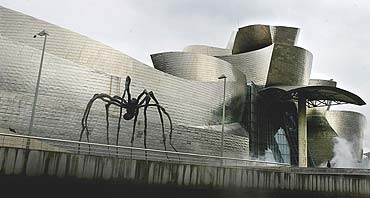 outlookindia.com
-0001-11-30T00:00:00+0553
When I heard two weeks ago that one Sanjay Singal, chairman of Bhushan Power and Steel, had bought a one-acre plot on 4, Amrita Shergill Marg in New Delhi for Rs 137 crore, I wanted to rush up to him and say, "Now that you have one of India's most prized properties, do select a great architect to build your home. For god's sake, let's not have another cut-and-paste job. Your building ought to symbolise the rise of a new age in India after the reforms, and millions will remember you for having captured a great moment in our history." For good architecture has the amazing ability to represent the life of the times in our imagination.

This issue of Outlook is about the way "the world looks at India", and one of the most potent ways is through visual memory. A great nation or city is defined by its buildings. We remember Paris not only by the Eiffel Tower, but by the wonderful boulevard buildings of Baron Haussmann. We think of New York by the Empire State and Chrysler buildings (although my favourite is Mies' Seagrams building). Sydney has its exciting Opera House. Although Seattle's signature is the Space Needle, etched in my memory is Rem Koolhaas' public library. There is even a city which was 'created' by a building—Frank Gehry's Guggenheim Museum is rightly called the 'miracle of Bilbao', which put this unknown city in northeast Spain on the world map. These visual symbols are not just symbols of man's quest for beauty, they also reflect the spirit of an age.

It is 15 years since the golden summer of 1991 when we lost our innocence and with it our fear of the global economy, and began our affair with the free market. It has been a remarkable period which has spawned world-class companies and made us one of the world's fastest growing economies. Time, the Economist, and Foreign Affairs recently did cover issues on this 'rise of India'. Yet if you think about it, we don't have a single visual image which celebrates this new age with its spirit of economic freedom and the unshackling of the energies of the Indian people, and in parenthesis, the slow decline of the old bureaucratic state.

Certainly, we do have some powerful visual reminders of our great cities. When you think of Mumbai, you think of the Gateway of India (although VT station is what I think of). Delhi has Qutub Minar, Humayun's Tomb, India Gate, and a host of visual symbols. But these are images of our colonial and pre-colonial past. The first and last visual moment of post-Independence India was in the mid-1950s when Jawaharlal Nehru, with plenty of vision and courage, commissioned Le Corbusier to design Chandigarh. Swadeshi voices were raised even then—'why can't an Indian architect do it?' But Nehru had little patience for petty minds with their petty complexes, and he stood firm. He may have been the victim of bad economic ideas like 'import substitution' but his mind was as open as Rabindranath Tagore's when it came to the world.

The civilised merchant prince, Vikram Sarabhai, supported Nehru's bold approach and he invited Corbusier to design a house for his family in Ahmedabad. During this fertile period in Ahmedabad, the great Louis Kahn built the campus of the Indian Institute of Management, and Ray and Charles Eames were associated with the National School of Design. Thus, two geographies of contemporary India entered the history of world architecture, Chandigarh and Ahmedabad. Corbusier went on to inspire a generation of great architects—B.V. Doshi, Charles Correa and many others.

Chandigarh is by now the memory of an age gone by. The city captured our utopian, post-Independence dreams of socialism, secularism and democracy, and more importantly our faith in the state's ability to do good. By the seventies, however, Indira Gandhi had perverted these ideals and socialism had turned into a statist licence raj and democracy was almost extinguished by the Emergency. Our mood of despair finally lifted with the announcement of sweeping liberalisation in July 1991. It was as though our second independence had arrived: we were going to be free from a rapacious and domineering state. A new stage in our history had begun with a decisive shift in the country's energy to the private sector. 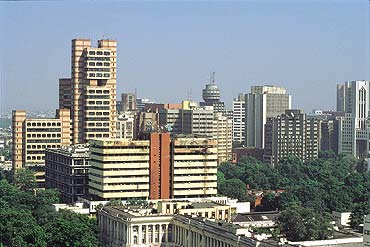 So now, when Infosys, Wipro or TCS puts up a new building, it should ask itself, if what goes on inside is world class, shouldn't the outside reflect this achievement? The same responsibility devolves upon our other globally competitive companies like Bharti, Bharat Forge, Jet Airways, ICICI Bank. Come to think of it, if Sir Norman Foster could design the Hong Kong airport and Renzo Piano the Kansia airport in Osaka, why don't we have great architects design our new airports in Delhi and Mumbai? The responsibility for 'dreaming Chandigarhs' has now fallen on the business class, particularly on builders like DLF, Mittals and Rahejas.

Just before Sanjay Singal bought his acre in Lutyens' Delhi, Navin Jindal had paid Rs 165 crore to buy 3.8 acres on Mansingh Road. At these prices one can now afford to bring in a Renzo Piano, Frank Gehry, Richard Meier or even I.M. Pei. A good place to start looking for a great architect is among the 27 recipients of the annual Pritzker Prize, architecture's equivalent of the Nobel Prize, but there are many more to choose from.

It is time we took our cities seriously. They have unbelievable energy; they are crowded; but they can be beautiful. The word 'city' is related to 'civic' and 'civilisation', and the city is a place of civilisation. Some Indians have a prejudice against urban towers, which is understandable, for a typical glass and steel tower is aggressive, arrogant and black, and it is trying to say, 'I am more powerful than you'. But when someone like Renzo Piano thinks of urban towers, he thinks of San Gemignano, and a 'desire to go up, to breathe fresh air, to disappear into the sky...it is not a bad idea to go up in dense cities.'

A hundred years from now, the world will remember the first quarter of the 21st century not for 9/11 as many Americans believe, but for the rise of China and India. It is as important a moment in world history as the Renaissance and the Industrial Revolution. Kenneth Clarke reminds us: "A great historical episode can exist in our imagination almost entirely in the form of architecture. Very few of us have read the texts of early Egyptian literature. Yet we feel we know those infinitely remote people almost as well as our immediate ancestors, chiefly because of their sculpture and architecture.' So, let's return the compliment to liberalisation by putting up some great buildings and make something out of our cities that will live after us.

(Gurcharan Das is the author of India Unbound and other books. He was formerly CEO of Procter and Gamble India.)

Italy Of The Orient