"Profundity with a light touch"—that was the essence of the fictional art of R.K. Narayan 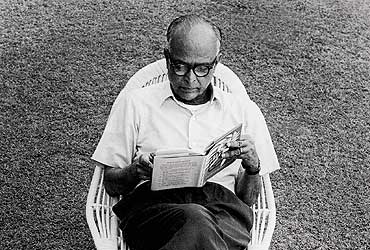 outlookindia.com
-0001-11-30T00:00:00+0553
I like to think of R.K. Narayan, rather extravagantly, as a mountaineer who challenged Mt Everest without a base camp. "I chose to be a writer mainly because it's the only career which guarantees absolute freedom to live as one pleases, stay or go where one pleases, without waiting for anyone's approval or sanction—freedom to sleep, read, walk, and above all turn to one's work only at one's pleasure. This indeed is the meaning of the word 'freedom'; but there is a price to be paid for it."

Indeed there was a price: typical of the enormous load of scepticism and suspicion Narayan had to work under was his own father's response to his first cheque as a writer: "Your first and last cheque, I suppose!", though, it must be said to the old man's credit, he apologised immediately. It was a mission dogged from the start by atmospheric turbulence.

After the death of his father, every adult male in Narayan's middle-class south-Indian Iyer Brahmin home—his significant sociological slot, the class-caste configuration—everyone had to contribute his share to the kitty of the family. And so, from the beginning, Narayan wrote with a purpose: "All this amount of composition was to allow me to earn money and help the family"—a wildly exotic idea even in these days.

Rigorous discipline and professionalism accompanied this single-minded self-faith of the young writer. "I regularly wrote a few pages each day." He mentions his "fear of missing my daily schedule", of "a daily discipline", even, touchingly, of "this weekly grind".

It was a struggle the young aspirant sustained over at least a quarter-century. Decades later, speaking at a symposium in Delhi on 'Living by Writing', the successful novelist recalled that when his wife had been alive, he couldn't buy her a single sari. His achievement is as much a moral victory as a literary one. Consider the critical hostility from his compatriots.

While I was interviewing him in 1967, Narayan drew my attention to a discussion on bbc Radio where, among the three participants, two of them—a novelist and a poet, both Indians—had run down Narayan, and the Englishman had had his hands full defending him. Narayan resented particularly the adverse comments so gratuitously made by the Indian poet in English. He added that he didn't care, of course, what a 'tenth-rate poet' said about him. During Narayan's next visit to Delhi, I took the transcript of the interview to him; he asked me to read it out to him. When I came to the bit about the 'tenth-rate poet', Narayan asked me to hold on, paused for a second and said, "promote him to third-rate".

The kind of misreading of Narayan's novels on which the two enlightened Indians based their observations is best illustrated by—who else!—V.S. Naipaul. His interpretation of Narayan and his analysis of the Indian condition are of a piece. Both begin with An Area of Darkness. On Narayan's pre-Independence novels, from Swami and Friends to Mr Sampath, Naipaul says Narayan contemplated "the lesser life" in his early novels (India: A Wounded Civilisation); "small men, small schemes, big talk, limited means"; and picks Mr Sampath to illustrate his favourite thesis of "Hindu withdrawal". But Naipaul misses the rich ambivalence of Mr Sampath; and the novelist's delightful technique of thumping and punching his hero's metaphysical speculations with solid reality; in a word, a wise reader like Naipaul underestimates the technical sophistication of Mr Sampath.

Contrary to Naipaul's cursory impressions, Narayan's early novels actually reveal a spirit very much of this world; the family, a cardinal value in the Narayan world, is at the centre of the lives of the protagonists. The unsentimental Naipaul acknowledges the beauty of familial ties in his own A House for Mr Biswas—the story of his own father and his masterpiece—but fails to notice a similar charm in Narayan's early novels. Reviewing The Bachelor of Arts, the Irish Times said (May 22, 1937) that the author portrayed his characters "with a sympathy and insight no foreigner could achieve". Pamela Hansford Johnson praised Narayan's "purity of style and clarity of thought". On The English Teacher, which is Narayan's attempt to understand the facts of life and death and is superior in philosophic wisdom to Hemingway's The Sun Also Rises, Henry Reed said in a review on the bbc: "The domination of his culture by ours has obviously set him personal problems, but he hasn't allowed them to go on persecuting him." Narayan as a writer is a "creative non-victim".

The heroes of Narayan's early novels are sensitive, creative, questing, questioning, resilient, tough and committed; moreso, Srinivas, the hero of Mr Sampath, so sharply dismissed by Naipaul. Srinivas is the most complex and the most elusive of Narayan's early characters. He engages in aesthetic/social purpose; he does not retreat from life and, like his creator, enjoys natural attention from and warmth for people. In the private journal he maintained after the premature death of his wife, Narayan notes: "The positive aspect of one's life mainly consists in doing one's duties, following one's lights, and leaving it at that. The results are inconsequential..."

This, of course, is the essence of the Bhagvad Gita familiar to most educated Indians—with the honourable exception of our occidentalists. This is what Srinivas, unknown to Mr V.S. Naipaul, practises—"attempting to present a spiritual message in terms of actual experience". He succeeds in practising Karma Yoga, the 'outsider's' humane commitment to life and society; his Hindu withdrawal is a successful attempt at the cultivation of existential detachment; his social involvement is dramatised once again when he takes under his wing a deranged young man at the end of the novel, and accepts the idea of reviving his reformist journal, The Banner. Anyone aiming at "subjective value in relation to a social outlook" cannot be one of "small men". The novel's action traces a significant curve, from the Upanishads to the Gita—a humanistic advance, from the Upanishadic urge for detachment to the balance of Gita's Karma Yoga.

Why does Naipaul make such an egregious error? Sadly for him, he doesn't suspect it; the reason is best offered in his own words: "Because we take to novels our own ideas of what we feel they must offer, we often find, in unusual or original work, only what we expect to find, and we reject or miss what we aren't looking for." Naipaul is discontented because Narayan's early novels are not "political"; but Desmond Hawkins, reviewing The English Teacher in The Listener, found that in refreshing contrast to the Americans' "sombre political concerns", modern Indian writers had brought into fiction "a very lovely lyrical quality notably lacking in contemporary western novelists". And how is a lyrical quality achieved, except via language? Narayan had early set himself a rare goal: "profundity with a light touch". That sums up the fictional art of R.K. Narayan.

Narayan's output is important: over 30 books; his range rare: novels, novellas, stories, a memoir, travel, books, columns, causeries, belles lettres; his success unequalled: he had sold in hundred-thousands by the late '60s. For a writer of provincial—non-metro!—origins, forced to struggle in the early decades against a closed, sceptic world (even his beloved Rajam couldn't see any contradiction between Narayan's creative writing and his taking up a job), his success was a miracle of the creative spirit. Like Mulk Raj Anand—who, because of his humble origins, would have been more handicapped had he been working in India—Narayan too battled it out; they were the heroic stuff a new literature invariably demands and bears.

As for the canard about Narayan's not being sufficiently sensitive to his social scene, Naipaul—himself "a writer without a country"— concedes in An Area of Darkness (l964) that Narayan "writes from the centre of his society". Here's John Updike: "What a wealth of material becomes available to a writer who can so simply assert such a sense of community!...of writers immersed in their material and enabled to draw tales from a community of neighbours, Faulkner was our last great example. An instinctive, respectful identification with the people of one's locale comes hard now, in the menacing cities or disposable suburbs, yet without it a genuine belief in the significance of humanity, in human significance, comes not at all!"

In a career spanning seven decades, Narayan's work evolved with his nation. He produced a feminist work even in the '30s. Here's Savitri, heroine of The Dark Room: "I'm a human being. You men will never grant that. For you we are playthings when you feel like hugging, and slaves at other times. Don't think that you can fondle us when you like and kick us when you choose." If this isn't social sensitivity, what is?

From the very beginning, Narayan's novels carried the moral ballast of good fiction, they sought a "true perspective". In his very second novel, The Bachelor of Arts, a book of extraordinary unpretentiousness, the hero, in his early 20s, concludes: "His greatest striving ought to be for a life freed from distracting illusions and hysterics". Narayan was not even 30 when he wrote that book.

Narayan plumbed the depths of the existential abyss first following the death of Rajam, and he wailed: "The unrelieved monotony of a life full of interest; the burden of life and failure...unendurable". Then in The English Teacher, he discovered that "a profound unmitigated loneliness is the only truth of life". In all his spiritual efforts, Narayan reminded himself to avoid "any form of rigidity or rigour. Any fetish, fanaticism, rigidity or rigour, by their very nature make living harsh, hard and dried up, while the positive values of existence...lie in suppleness, harmony and joy."

This is quintessential Narayan, the fictional artist, the very sanity, and wholesomeness, of life! To numerous successful and famous artists with attractive morbidities, he offered a counterpoint, laced with a humour Graham Greene called "strange to our fiction". His style was something of a discovery; he'd written in the flowery style Indians tend to indulge in before moving to an unobtrusive transparency in the late '20s. "Since the death of Evelyn Waugh, Narayan's the novelist I most admire in the English language." Greene wasn't speaking like a fond friend. The novel was Narayan's forté. Historically, he broke new ground in theme, technique and style; the recent success of Malgudi Days on TV confirms his status as a great integrator; to his successors Narayan bequeaths the great gifts of self-faith, professionalism and discipline. "Whatever happens, India will go on," he remarked to Naipaul in the early '60s. Whatever happens to India, I believe, R.K. Narayan will go on.