Home  »  Magazine  »  International  » diplomacy: indo-pak ties »  Are You Still There?

Are You Still There?

Post-blasts chill over, India-Pak look to NAM meet to break the ice 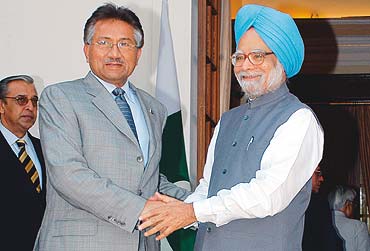 Barely two months after the Mumbai bomb blasts, Prime Minister Manmohan Singh will be meeting the man whom India has been subtly trying to blame for the diabolic acts—General Pervez Musharraf. The meeting is likely to happen on the sidelines of the 14th Non-Aligned summit in Havana, and will, in all probability, result in a resumption of the composite dialogue that has remained in suspended animation following the blasts.

Paradoxically, none of the conclusions the government reached about Musharraf consequent to the blasts has changed. In the days following it, almost every statement New Delhi made stressed on the external linkages of the terrorist attacks in Mumbai. The prime minister stressed the Pakistan factor by pointing out that the commitments Pakistan had made on terrorism were still to be backed by action on the ground, that the "terrorist acts were on a scale that they could not be accomplished without external involvement" and that it was "inevitable that in the light of the ghastly tragedy, we need to reflect on our relations with Pakistan".

Senior government officials had broadly offered three theories about Musharraf then. One, the jehadi elements and the isi were now independent of Musharraf who could no longer control them. Two, with general elections due in Pakistan in 2007, and Musharraf unwilling to strike an understanding with the political parties, he required the support of the fundamentalists. Consequently, he couldn't crack down on them. Third, Musharraf was indeed in perfect control, and the Mumbai incident reflected the Pakistani belief that cross-border terror is its only effective leverage against India. At the core of every theory the government sources had suggested was Musharraf, thereby posing the dilemma: how does New Delhi handle him?

Over the last two months, none of the assumptions underlying the three theories has changed significantly. The infiltrations continue apace in Kashmir; communications networks between terrorists and their handlers in Pakistan remain as active as ever; new terror training camps have been detected; the Lashkar-e-Toiba is on a recruitment overdrive to enhance the "indigenous" content of cross-border terror. Therefore the question: what will India gain by talking to Musharraf?

Defending the Havana meeting, senior government sources say it will not diminish India's concerns on terrorism emanating from Pakistan. In fact, these concerns make it imperative that a meeting with Musharraf happens. It's the only realistic way of dealing with the problem. Second, these sources say, even in July the door hadn't been shut to the possibility of resuming the composite dialogue. Manmohan had then refrained from using harsh language against Musharraf, pointing out that he is the "president of Pakistan and we have to deal with people who are in government". Simultaneously, he had said that India and Pakistan "both have an obligation to work together, but in a democracy, there are limits to what leadership can do".

The public mood post-Mumbai, these sources say, had been the key factor in determining the government's response then. Now, after a sufficient cooling-off period following the blasts, there seems to be no harm in meeting Musharraf. Had Manmohan gone to New York for the UN General Assembly, he would have met Musharraf anyway. Since both Manmohan and Musharraf happen to be visiting Havana for the NAM summit, it would have been decidedly odd if they didn't meet. However, the government is maintaining a silence on who first sought the meeting and how it was arranged. They only say it is in the interests of both parties to keep meeting whenever an occasion arises.

There are also other factors determining the meeting. For one, senior sources say, the government has for the past many months focused its primary energies on working out the nuclear deal with the United States. With the deal now nearly in the bag, the government can now focus afresh on other foreign policy perennials like Pakistan. Meanwhile, Manmohan has had time to get a fair fix on substantive issues concerning Indo-Pak relations. He now has a sense of the opposition springing from institutional elements in both countries on some of the substantive issues, and also the kind of support he can expect from across the political spectrum on specific Pakistan initiatives.

These sources, however, draw a distinction between a meeting on the sidelines of a multilateral event and a formal trip to Pakistan by the PM, an event that still hangs in the balance. A meeting on the sidelines is hardly the ideal venue for a significant breakthrough. Consequently, both sides have rather modest expectations from the meeting. Sources say Manmohan will travel to Islamabad only if the ground has been prepared for a real breakthrough, and hence the Havana meeting could be crucial.

Senior government sources also say that several factors militate against a rapid pace of progress. The most serious is the political vacuum in Kashmir. Relations within the ruling PDP-Congress coalition are not in the best of shape. Thus, New Delhi can scarcely hope to take any meaningful initiative in Kashmir, a vital aspect of the peace process.

Also, Musharraf, say sources, has been on the backfoot from the time tribal chief Nawab Akbar Bugti was killed in a military operation; his death has become a fresh rallying point for those opposed to Musharraf. Sources say at a recent corps commanders meet Musharraf experienced some difficulty in getting an unequivocal endorsement for his Balochistan policy. Although Musharraf might talk again about India's lack of flexibility when he attends the UN General Assembly session, he'll be more than happy if India comes up with a way to carry forward the composite dialogue process.

So what's the bottomline? Well, there is a realistic recognition that incidents of terrorism cannot impede the peace process. It would have been a different matter, of course, if there had emerged any convincing evidence linking Pakistan directly to the blasts. The capacity to stomach incidents of terror is directly proportional, therefore, to the quality of evidence forthcomming. Ergo, the weaker the evidence, the lesser the cooling-off period between India and Pakistan.