Menstrual disorders may be more, not less, prevalent in developed countries 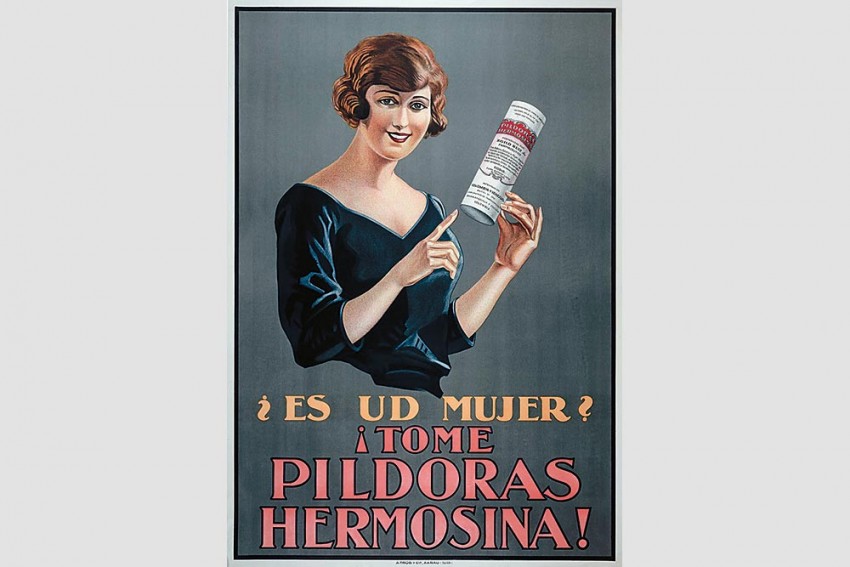 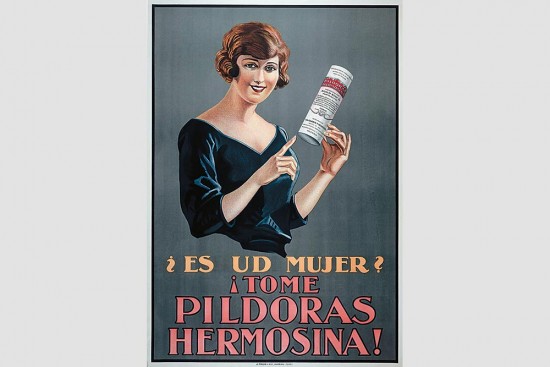 In all conversations around menstruation, the one topic that should have been at the forefront, and yet is hardly even touched upon, is menstrual health. Health is a very measurable entity. Numbers, diagnosis and medical expertise can easily point to exactly where we stand with respect to menstrual health. Yet, there is utter silence. In a recent trend, menstrual researchers such as those who gather on platforms like ‘Menstrual Health Hub’ have begun to state that there is a need to gather evi­dence-based research. This is a relief, especially after years of blindly pushing for sanitary napkins, saying these could save women from dangerous rep­roductive health issues.

But is it really the case that there isn’t enough data, or simply that we are not comfortable talking about what the existing data rev­eal? Let’s take a deep dive into this and look at what exactly is making the modern researcher uncomfortable when it comes to hard data on menstrual health.

Do developing countries rea­lly have a greater ­prevalence of menstrual disorders? The vast majority of work on menstrual health and hygiene is happening in developing countries like India, Kenya, Nigeria, Brazil, Nepal, Bangladesh, etc. However, the discourse and agenda is largely set by entities from developed countries such as the US, UK and Australia. If we look at the data from comparative studies such as the WHO’s multi­-country study (Omran et al., 1981), we find that they usually compare data from dev­eloping countries, with hardly a mention of the prevalence of menstrual disorders in developed countries.

The assumption that dev­eloping nations have a higher prevalence of menstrual disorders is generally not contested. The reasons cited are often poor socio-economic status, illiteracy and simply the fact that a country is ‘dev­eloping’. Let’s rev­isit this assumption by looking at comparative data on two of the most prevalent menstrual disorders—menorrhagia (heavy menstrual bleeding) and dysmenorrhoea (painful per­iod)—among adult women and adolescent girls in India, other developing countries and developed countries. 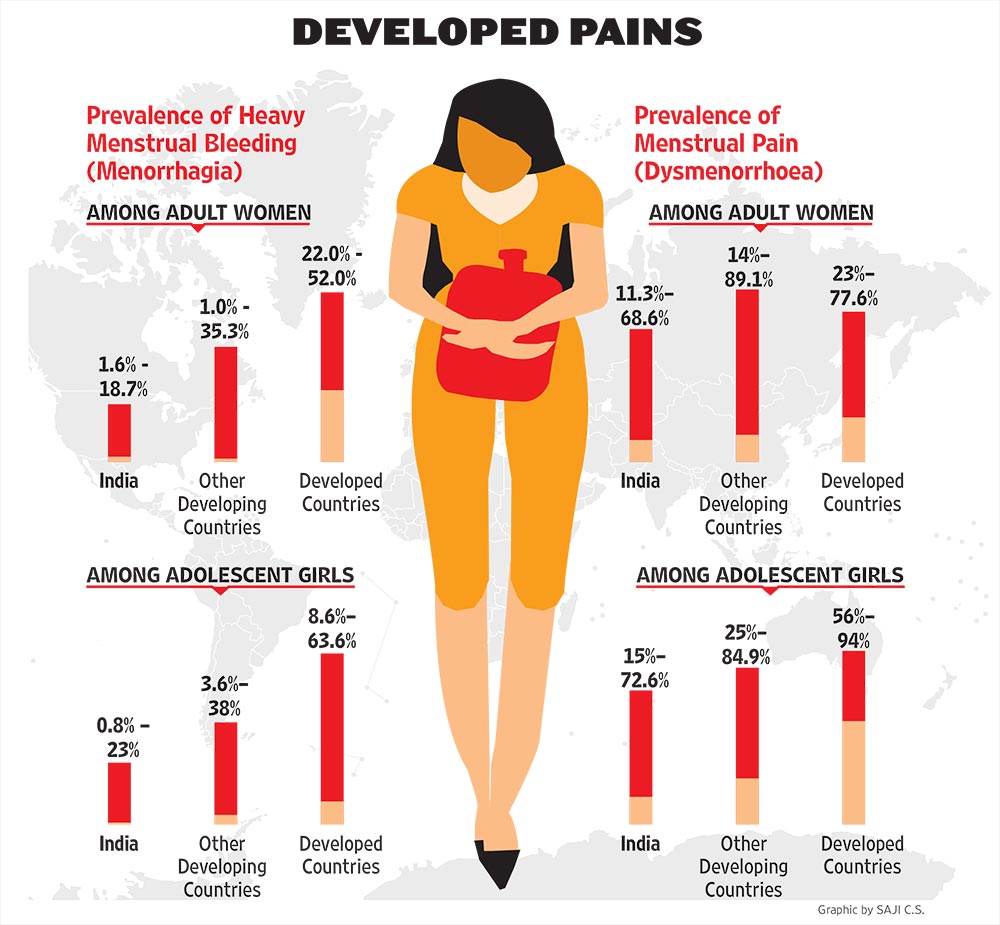 Developed countries: In comparison, the data from developed countries indicate a higher prevalence of heavy menstrual bleeding among adult women—between 22 per cent in the Netherlands (Fraser et al. 2015) to 52 per cent in England (Santer et al. 2005). Further, a study of elite athletes in London rep­orted that 54 per cent of women experienced heavy menstrual bleeding (Bruinvels et al. 2016).

30 per cent of women in the US have a hysterectomy before they turn 60—and menorrhagia is the main presenting problem.

Menstrual Products and their impact on menstrual health: The undisputed trend of menstrual discourses in developing ­nations has been the promotion of menstrual products, especially sanitary napkins, under the guise of Menstrual Hygiene Management (MHM). The idea is to emulate women from developed countries who have access to such products. However, the menstrual health data above raises serious questions about why the focus has been on developing nations, when in fact developed countries have a greater prevalence of menstrual disorders, in spite of them following WASH United’s much-touted menstrual hygiene formula, of using declared hygienic products such as sanitary napkins and having access to good sanitation.

“Evidence to support the link between poor Menstrual Hygiene Management and other ­outcomes is weak and contradictory.”

Which brings us to the next question: do menstrual products have any impact on menstrual or reproductive health disorders? A study by the London School of Hygiene and  Tropical Medicine ((Torondel et al. 2013), which looked at 14 articles to understand possible correlations between menstrual health management and reproductive tract infection (RTI), found that there was no association bet­ween confirmed bacterial vaginosis (typically characterised by excessive white discharge) and MHM. It also says: “The body of evi­dence to support the link between poor MHM and other health outcomes (secondary infertility, urinary tract infections and anaemia) is weak and contradictory.” The study concludes: “It is plausible that MHM can affect the reproductive tract, but the specific infections, the strength of effect and the route of transmission remain unclear.”

Strangely, it has occurred to very few that menstrual disorders have little to do with hygiene or the product used (except in the proven case of tampons causing Toxic Shock Syndrome among some women). The most common menstrual disorders such as dysmenorrhoea (period pain), ­menorrhagia (heavy bleeding), amenorrhoea (no bleeding) and oligomenorrhoea (menstrual cycles > 35 days) have no association with what product is used or how hygiene is maintained. The more serious disorders like endometriosis or PCOS are even more cut off from hyg­iene correlations. Some write-ups go to the extent of associating poor menstrual hygiene with cervical cancer, for which there is even less evidence.

Should we let MHM ­evangelists teach us?: Menst­ruation is as old an occ­urrence as women themselves. Our ancestors were never taught MHM. They simply knew what to do, and passed on the knowledge from generation to generation. Woven into their culture were various practices that served to prevent menstrual disorders. Practices that allow women to take the needed rest during menstruation and avoid physical exe­rtion, along with specific diet restrictions; these are not tab­oos, but the means by which women in ancient soc­ieties took care of their health—by intelligently weaving science into ­culture and religion, so that large masses of women are benefited.

Whether it is India’s Ayurveda, China’s Acupuncture (Armour et al. 2016) or the indigenous science of the Caribbean isl­ands (Flores et al. 2014, Tinde et al. 2014), there is a far deeper understanding of the menstrual cycle than we have cared to investigate. This und­erstanding shows in the menstrual health of women from these countries. This is the area where research could go if we choose wellbeing instead of treatment and surgery, not to mention the effect prevention will have on health budgets. But first, we should be willing to acc­ept that the supposedly deficient targets of MHM ‘benevolence’—that is, women from developing countries—might in fact be the ones who still hold ans­wers on how to prevent menstrual disorders.

Here’s an honest question. How comfortable would menstrual researchers and NGOs that fight for poor girls and women in developing countries be if they had to state that, as of 2018, it is not India, Gambia, Nigeria, Brazil or Nepal that have the most menstrual disorders, but nations like the US, the UK and Australia—countries that are leading the menstrual hygiene movement to help developing countries. Yes, it is a lot easier to state that there still isn’t ‘enough’ evidence-based research on menstrual health.

(The writer is a women’s health activist, menstrual ­educator and co-founder of Mythri Speaks Trust)