Arbiter At The Gates 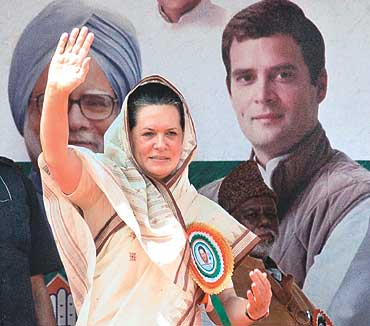 So how did the Cinderella of Orbassano, Indira Gandhi’s mute and retiring bahu, survive the brutalities of political life and emerge as India’s most powerful woman? By means of two weapons, as journalist-biographer Rasheed Kidwai seems to suggest in his revised biography of the enigmatic Sonia Gandhi, carrying forward her extraordinary journey to the helm of national affairs. The first is her unflinching ability to wield the butcher’s knife as deftly, if not as ruthlessly, as any of her rivals, both within and outside the Congress, showing a surprisingly good stomach for the blood and mess and loud squealing that this involves. But it is the second weapon she has made uniquely her own, flooring her enemies time and again: her "inner voice".

We heard her inner voice speak up famously on May 18, 2004, when she did the unthinkable by turning down the top job as prime minister. Was it because she was unsure of herself and of running a coalition of unpredictable allies, as critics claimed? Kidwai insists her refusal was not from lack of confidence but "a product of exceptional realpolitik" and "the mark of a deeply ethical mind". We saw the inner voice at work again on March 23, 2006, when she quit as member of the Lok Sabha and chairperson of the nac, in the wake of the ‘office of profit’ controversy, leaving her foes stunned. The inner voice was in evidence as far back as 1999, when she turned the tables on her party rivals by quitting as Congress chief when they brought up the foreign origin issue. Her unexpected action enthused the rank and file, forcing the rebels to quit the party. The lesson wasn’t lost on the fledgling politician.

Sonia learnt her politics in the best of all schools: as part of a joint family in Indira Gandhi’s household. She won the trust of her mother-in-law by being the perfect Indian bahu: cooking for the family when the family retainer died and Mrs G was too afraid to replace him, shopping for groceries and gifts, voluntarily giving up her jeans and skirts for saris when Rajiv joined politics, but most importantly, staying aloof from politics. By the end of her life, Mrs G was leaning more heavily on Sonia than any other family member, sharing even her political problems with her. When Rajiv became PM, he too ended up consulting her. It was well-known that she was the more astute politician of the two, sizing up people without being swayed by their good looks or sweet talking. It was within this political family that Sonia schooled herself to endure the public gaze without giving away her emotions and "not to react in the face of falsehood and slander," as Sonia once said.

Opinion is still divided on why Sonia plunged into politics, especially after her professed aversion to it. Most feel it was in order to save the party from disintegrating and thus keep the seat warm for her two children. But in her own words, "it is a mystery...the hidden hand of destiny...a story of inner struggle and torment, a story of how the experience of loss can impart a deeper meaning to life". In short, to save the secular legacy and continue the work of the two persons she loved who died in their prime: Indira, who was like a mother to her, and her husband, Rajiv Gandhi. But whatever may be the reason that brought her into the hurly burly of politics, she has clearly found her life’s calling. "I just could not resist (joining politics)," Sonia told some family friends with rare candour. Whereas seven years earlier, "I was dead opposed to it (politics), I was shocked and considered Congressmen extremely insensitive when the cwc passed a resolution in 1991 asking me to take over as party chief."

Kidwai’s biography, as he says at the outset, is not official. He seems to have had no access to his subject, forcing him to rely on secondary sources. As a result, this is less a biography than a compendium of assorted material on Sonia, relieved by amusing tittle-tattle, but sheds little light on the enigma that is Sonia. It does have a few flashes when we see the real woman behind the mask: a woman who walks away from a cwc meet hurt by her partymen calling her a foreigner, a mother who turns to her children each time she is in a quandary, her determination to keep her Sundays free so that she can spend time with her grandchildren. A reluctant politician who has the best of both worlds.