Bhangra is out, Dandiya is in. Gujarati is everywhere, on the tube and in the halls. 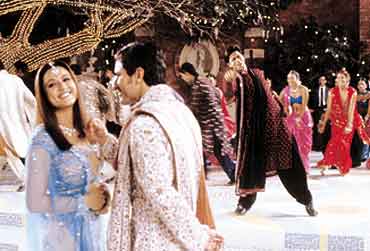 outlookindia.com
-0001-11-30T00:00:00+0553
Overheard at a Delhi multiplex: girl says grouchily to boyfriend, "Why don't you whisper something soft, nice and sweet into my ears for a change?" Boy smiles and says: "Dhokla". They both break into peals of laughter.

Welcome to the age of Gujaratification. Slowly, "Kem chhos" are replacing the "Ki haal chaals" of the world. Punjabi popstars croon about Gujarat di kudis snatching away their hearts. Hindi films contain songs that start with Gujarati and end in a bhangra. Gujarati characters are generously sprinkled all over TV serials and films. Vadodara's lads make all of us proud when they play cricket in Pakistan. And Navratri, for the entire country, is time to Dandiya.

Indian TV's leading soap, Kyunki Saas Bhi Kabhi Bahu Thi, revolves around a Gujarati clan: the Viranis. Explaining why he decided on setting his story against a Gujarati backdrop, Rajesh Joshi, Kyunki's ex-scriptwriter, says: "Gujaratis are a very vibrant people, deeply rooted in their culture. They have an entire anthology of folktales, songs and dances for every occasion and lots of celebrations and ceremonies, something that makes everybody identify with them and at the same time provides ample material for screen adaptations."

Says Aatish Kapadia, writer-director of popular serial Khichdi, about a Gujarati joint family most of whose members have IQs only slightly above room temperature: "Gujaratis are Punjabis in a new pack." For him, it's pure marketing strategy. "The laws of marketing say that packaging needs to be periodically changed to allure the buyer. Gujjus, in all honesty, come very close to their Punjabi counterparts. They retain the basic elements of a Punjabi lifestyle, yet the characters look ethnically different, the culture and customs look new, and the behaviour remains close to what the audience is happily accustomed to."

Punjabis have always dominated the film industry right from the Prithviraj Kapoor years through the heyday of Yash Chopra to current kitsch-king Karan Johar. So it's only natural that their ethos translated itself onto celluloid: a Karva Chauth sequence in every second family drama, and the liberal usage of Punjabi in songs. But things are now going Kathiawadi with a vengeance. Look at last year's blockbusters. Whether it was a Baghban (Paresh Rawal's role) or Chalte Chalte (Satish Shah) or Kal Ho Na Ho (Saif Ali Khan's family), all these films had very prominent Gujarati characters.

"Punjabiness has been done to death on our screens," opines Film Information's editor Komal Nahta. "The audience sorely needed a change. And who could have been a better replacement than the Gujaratis? Like the Punjabis, they are colourful, have large joint families and their music is as foot-tapping." Joshi agrees: "Serials like Kyunki have helped people in identifying with Gujarati culture, made it so popular that every filmmaker now wants to cash in on it. How do I know about Karva Chauth, Baisakhi or Jagrata? I'm not a Punjabi but I've been exposed so much to all this that I now identify with it. Similarly, people are now beginning to associate themselves with Gujarati culture."

There's another angle to this phenomenon that's summed up in two lines of the tongue-in-cheek G.U.J.J.U song from Kal Ho Na Ho (KHNH): "1, 2, 3. What a community, Shah, Patel, Mehta, have the best jewellery."

It's true that Gujaratis are one of India's richest communities and a bit over-the-top in displaying their wealth. But it's also true that seven of the top 10 Antwerp diamond houses are now Gujarati-owned (known as 'G-7' in the trade). In just 25 years, Gujarati Jains have managed to subvert what the Hasidim Jews had achieved in 500 years in the Belgian diamond industry.

The Gujarati NRI is seen as rich, successful and deeply connected to his homeland, much like his Punjabi counterpart.Says Paresh Rawal, who's played Gujaratis in films as varied as Sir (mafia don), Aa Ab Laut Chale (New York cop) and Baghban (the hero's loyal friend): "The fact that Punjabis and Gujaratis form the two biggest chunks of the NRI diaspora and that most films these days are being made keeping the overseas market in mind could be one reason why suddenly Gujaratiness has so many takers."

Perhaps the Gujarati's love for entertainment is also in some way responsible for this mini-resurgence. The community has always been ardent theatre patrons and produce anywhere between 50-75 good plays every year. Says Ketaki Dave, the actress who played the "Ara ra ra"-spewing Daksha in Kyunki as well as Saif Ali Khan's mother in KHNH: "Gujarati theatre is one of the richest in the country today. And since Bombay is the centre of most theatre activity in the language, lots of talented people are spilling over into the film and TV industry. So there's bound to be an influence." Ditto, says Aatish Kapadia: "A lot of plays have been adapted into films and TV shows. In fact, my first play Aandhlo Paato was adapted into the film Aankhen, and my most recent play Aavjo Vhala Fari Malishu is being made into a movie called Waqt starring Amitabh Bachchan and Akshay Kumar."

The Gujarati effect is fast trickling down from the reel world to the real too. Non-Gujarati women wearing their sarees the front pallu way is a common sight today. Phrases like "Ara ra ra" have become part of common parlance. Last Navratra, Indians swayed to the beats of Dandiya music all over the country, be it at the cricket ground at St Joseph's High School, Bangalore, the Residency Club in Pune, or even the Garden of Five Senses in Delhi. Recalls Munish K. Baldev, CEO of Delhi shopping mall Ansal Plaza: "We organised nine Dandiya nights at our amphitheatre and the response was phenomenal; 1.65 lakh Delhiites attended our function. And at least 65 per cent were non-Gujaratis. The crowds were going crazy doing Dandiya to Daler Mehendi's songs who was singing in Hindi, Gujarati and Punjabi. It was amazing."

Meanwhile, Gujarati food too could soon be giving butter chicken a serious run for its money. It's steadily gaining converts, especially among vegetarians, with whom Gujarati thalis are very popular. Rishabh Jain, who owns Kadimi's Sweets at Delhi's Sadar Bazaar, says he sells at least 20 kg each of dhokla and khandvi every day: "They are so popular we have to make them twice a day."

So, does all this mean we are saying "aujo" to the North Indian family, which has ruled the roost in Hindi TV serials and films for decades? Not quite, says Rawal: "This might turn out to be just another fleeting phase. They got bored of the Punjabis so they got the Madrasis, after that they got the Gujaratis. Our industry has very few ideas and everybody copies each other."

Rawal, one of the country's most talented actors and Gujarati theatre's biggest star, is not completely satisfied with the way his community is depicted in popular culture. "There is only one aspect of Gujarati culture that's being portrayed these days," he says. "Yes, Gujaratis are humorous but that's not all there is to them." His reference is to the fact that in Hindi films, Gujarati characters are still being played mainly for laughs. "Gujaratis are independent, determined and very hardworking," points out Rawal. "At the time of Independence, three Gujaratis shaped India's future—Gandhi, Patel and, yes, Jinnah was also Jinnah bhai. When a culture is shown in all its colours instead of just concentrating on people's accents, then probably this may become something more than a passing fad."

Right now, however, this doesn't seem like a trend that's going away before you can say "thepla". Gujaratis like Bharat Shah, Dhirubhai Shah, Vinod Doshi, Gaurang Doshi and Shravan Shroff are power hubs in today's Bollywood.Also, serials like Sony's latest fare "Ye Meri Life Hai" continue to be bullish on Gujaratis as protagonists. Whether it's Parthiv or Ashmit, it seems the Patels have truly arrived.