His world was my world. Till the cement wall came down. 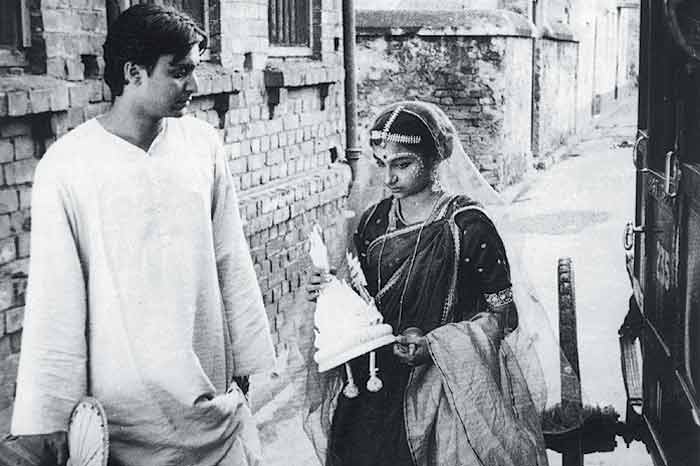 I never found Apu’s flat, where he lived with his flute, his books, his accidental wife, where he lived, briefly, with her death, and where at least once a year, I too live with him. I was 20 or 21 years old when I first saw Satyajit Ray’s The World of Apu. It was playing at the Apollo Theatre in Times Square. Even now, getting off at the Times Square Station, I think Calcutta. I see Soumitra Chatterjee on his verandah in the monsoon rain above the desolate railway tracks. It is rare to carry a film around inside you. You can’t fold it into squares like a poem and keep it in your pocket. You must rely on the intangible projectionist of memory.

Apu is a film about youth, art, death and the spirit’s rebirth. I have changed a lot since I first saw Apu. But Apu has never changed. Just once, I would like to see him climb out of his black-and-white orbit and read to me the parts of his novel that he threw, page by page, with robotic hands, from a mountain top. It was strange arriving for the first time in Calcutta in January, and finding not a sacred cinematic space, but the massively embodied city. In Apu’s Calcutta, you wonder where all the people are. His flat is a cloister. Its silence is broken from time to time by the long, ear-splitting whistling of trains, and his friend Pulu’s knock on the door. The noise of Calcutta is usually careful not to violate Apu’s solitude.

I had come to Bengal to do stories on environmental activists. It was as good an excuse as any to finally bring myself to this city. Beneath my journalist’s mask, I was there to make a pilgrimage to the place of Satyajit Ray, to the flat of Apu. Calcutta is also the city of Soumitra Chatterjee. But even after seeing him in Devi, in Teen Kanya, in Charulata, he was twinned inside me as Apu, without the possibility of reprieve, without the chance for autonomy.

In a documentary on Soumitra, I heard a Bengali writer once say, “We were all Apus.” I was a New York Apu. I was the only New York Apu I knew. I wrote inside a space without a flute. I quickly gave up trying to graft the image of a single room onto tumbling, jarring, limitless Calcutta. I was a pilgrim holding on to a fragment in the middle of endlessly exploding fragments. I was a New Yorker in West Bengal, driven by art and tipping dangerously.

I was sometimes tempted to stop Calcuttans on the street, or in the Metro, and ask them if they knew the way to Apu’s flat. But it is not my way to lasso strangers with my obsessions. In any case, public spaces in Calcutta are rolling chambers of noise. Down in the Metro, Bollywood stars would be working out the kinks of love, singing and dancing. These dance numbers were nothing compared to a particular ad for Birla Gold cement. It featured a doddering, thick-waisted old man trying to keep up with a young boy in a baseball cap with a turned-around peak on a suburban Indian street. Meeting up in the end with construction workers working with Birla Gold cement, everyone smiled, but the old man smiled more than anyone. As an old man myself, I was embarrassed by that old man, undignified in the way of American old men demeaning themselves before the royalty of youth.

I was only able to take the ad in stops and starts. Did someone actually think that this bit of ageist frivolity would get people to buy Birla Gold cement? One morning, at the Kalighat Station, for no apparent reason, I found myself looking hard at that old face. Terror took hold of me. The terror I used to feel seeing the crypt opening slowly on the big screen as a little boy. The terror of not being able not to look. That more than anything.

The old man was Soumitra Chatterjee. Apu! What I had held and carried for so long fell and broke. It had survived assorted deaths, unpublished novels, six trips to India, only to perish on the seventh. On my train to Park Street, I felt betrayed by this new Soumitra Chatterjee, by this anti-Apu. It was crazy of me. Indulging for so long the sweet suffocation of youthful identity.

When I see the Apu DVD now, my eyes hold him lightly. I let him inside me, to a quiet place inside me. I honour his story. We have both been through a lot.

Drill Them All Into Line