Thanks to Drishya, villagers in Calcutta's backyard are getting a taste of world cinema classics 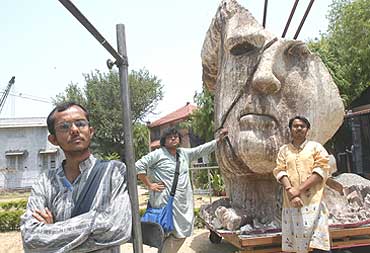 The group began with Ray’s Goopy Gyne Bagha Byne (Adventures of Goopy and Bagha), 1968, knowing that people would relate to the spoken Bengali. A Bengali cult classic, Goopy, is a fairy tale where the lead pair have the power to conjure food out of thin air. During one evocative scene where Goopy and Bagha shout out for rasogullas, gulab jamuns and puris, "a collective sigh" went through the crowd, recalls Drishya’s Sunetro Bandhpadhyay. "No one missed the theme of starvation, and the fact that soldiers were willing to put down weapons and eat rather than wage wars," adds Chiranjeeb.