A terribly listless, insipid yawn of a comedy — a virtual parade of idiotic characters, one more irritating than the other 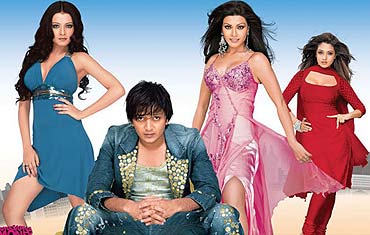 Contrary to public opinion, I didn’t quite mind Sangeeth Sivan’s raunchy maiden venture, Kya Kool Hain Hum. The in-your-face vulgarity, and double entendres apart, it did have a sharp comic touch. It could make you laugh even as your ears went red hearing the unmentionables. In his latest film, Sivan cuts down on the risque quotient and loses most of his comic timing in the bargain. In fact, the suggestive jokes and innuendoes here are utterly stupid and silly than blatantly sleazy. Apna Sapna... is a terribly listless, insipid yawn of a comedy. Its only mildly funny moment is a terribly crude gag which a family magazine like ours would desist from describing.