Is it time for India to vote online? The pros and cons abound. 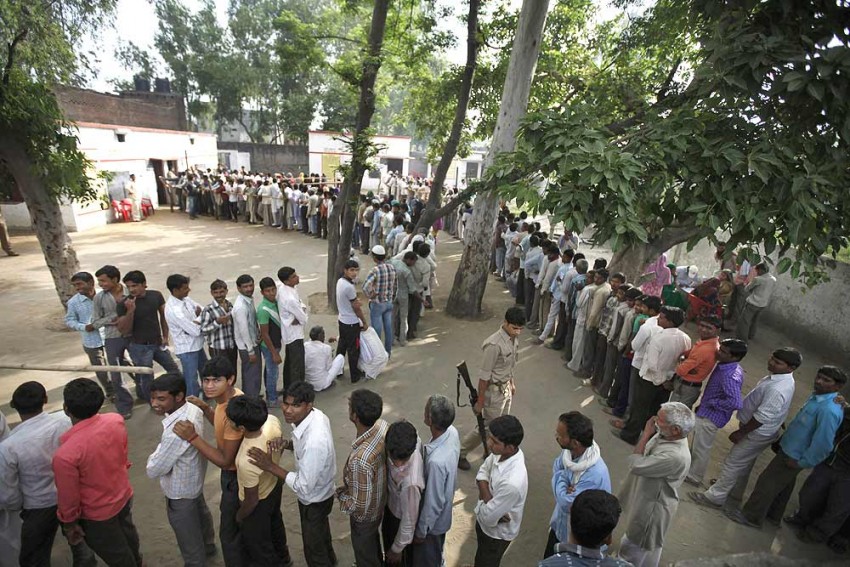 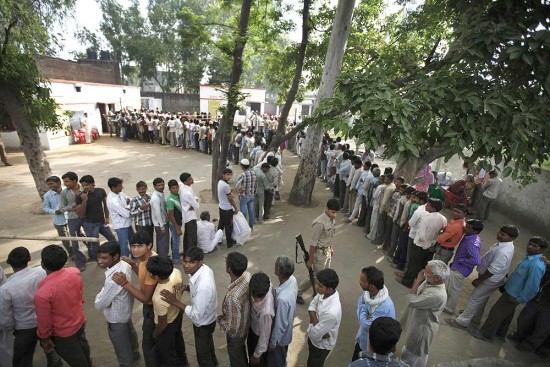 Former president A.P.J. Abdul Kalam in his book Governance for Growth in India points out that in the near future, we could well be voting from our mobile phones. In a recent interview to Outlook (‘Talk about things you will do, don’t insult individuals’, Apr 28), he had said: “You should be able to get all the data about your candidate electronically—how much property he holds, how much tax he pays. And yes, as long as the secrecy is maintained, you can definitely vote electronically too.” Many are veering towards his point of view, looking at virtual polling not just as a dream or fantasy but something realistically possible to implement. “It is the way to the future,” says media commentator Sudheesh Pachauri.

“If voters can’t spend their time and energy to go out on voting day, a paid holiday, then e-voting is too unfair a demand.”
S.Y. Quraishi, Former CEC

This bug has grown stronger in the face of the longest (nine phases, six weeks) and most expensive (Rs 3,500 crore by Election Commission estimates) general election in the history of the country. Wouldn’t the money, time, manpower and resources spent on this mammoth exercise be reduced through electronic polling? And des­pite the substantially better voter turnout this year, wouldn’t we have got even better numbers if people were remote voting from their mobiles, laptops or PCs than venturing out in the heat to cast their vote? No, says, former chief election commissioner S.Y. Quraishi. “If they can’t spend their time and energy to go out on voting day, which is a paid holiday, then e-voting is too unfair a demand,” he says.

For others, on paper, the virtues of e-voting seem too many. “It reduces cost, cuts down on logistics tremendously and makes the whole process more efficient and controllable,” says Rajan Mathews, DG, Cellular Operators Association of India. “It will make voting less of a bureaucratic process that it has become,” says Nimish Dubey, associate editor, My Mobile magazine. According to him, all the stuff—getting a voter’s chit, then figuring out your centre, standing in a line, showing your ID, getting your finger inked, getting another chit which you hand over to some other person after signing in another place to finally get to the mystical machine and hit the button—this necessitates hiring staff, buildings and using endless reams of paper. “All this could be skipped if all a person had to do was log in and click a button,” he says.

“There are many who want to vote but can’t. E-voting will be a boon for them and could increase the percentage of voting.”
Sudhir Mishra, Filmmaker

The view of these ‘vested interests’ apart, there are other advantages to e-voting. It can help make the electoral process more accessible to people in far-flung areas. As also allowing the nris, those travelling on work or living far from their constituencies to exercise their franchise. “These are genuine problems for many a registered voter in modern-day India,” says filmmaker Sudhir Mishra. “There are many who want to vote but can’t. E-voting will be a boon for them and could increase the percentage of voting drastically.”

It will certainly lead to a spurt in urban middle-class voting. But one would need something really simple and working with the limited power resou­rces for the India that lives in its villages. But, yes, if well-implemented, it should take voting to the 90 per cent territory, predicts Dubey.

Of course, the practical question remains. How easily implementable is this, given the issues of networks, hardware and software? “It will be relatively easy to implement,” reassures Mathews. “The enabling technology and facility are in place.” It would still involve training as well as hardware and software development. But after a one-time cost, it could actually cost lesser and be a whole lot more convenient than the current system, Mathews adds. 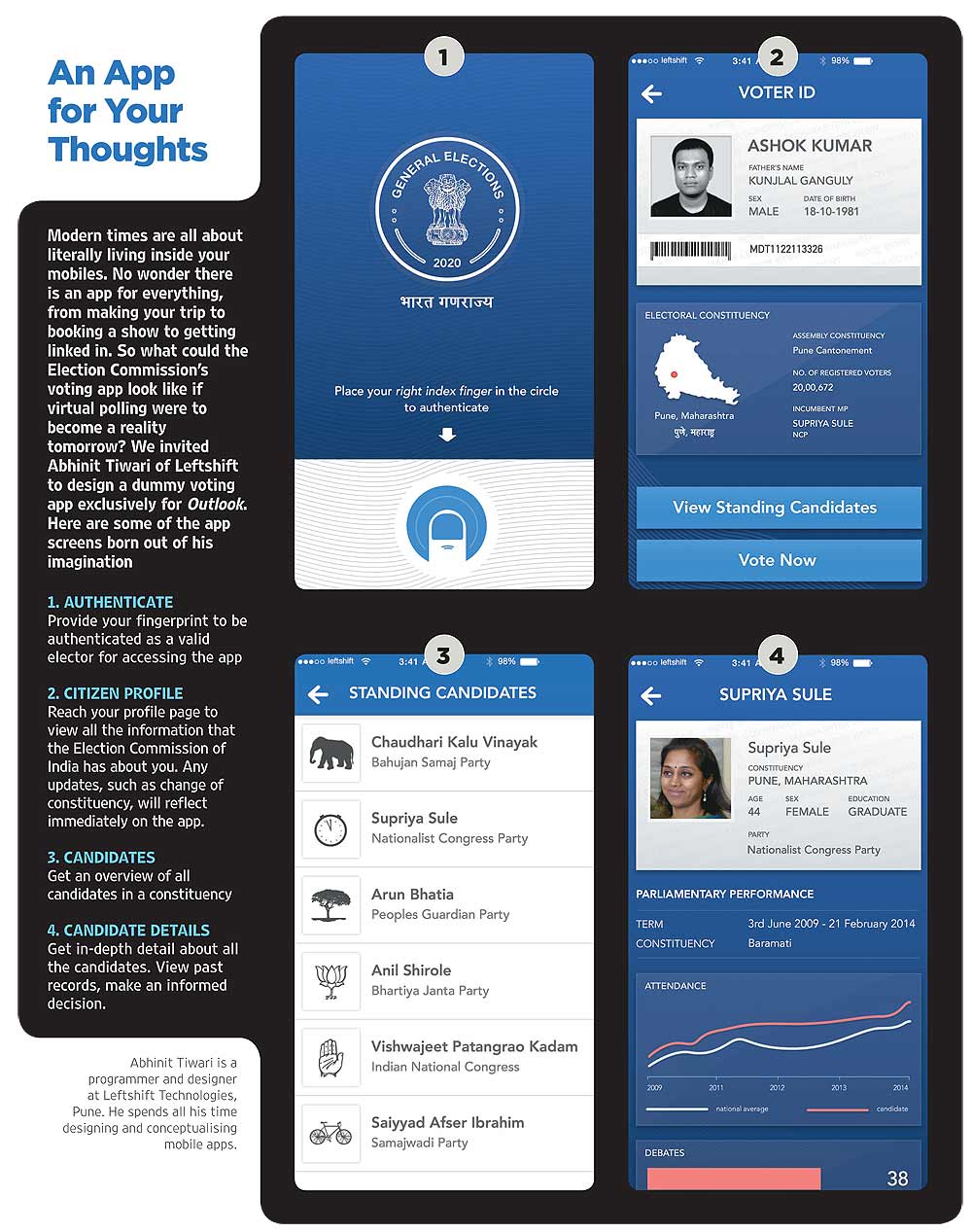 Not all, though, are so sure about the reach of the internet and cell phones. “What’s the point if there is no 100 per cent access to this new system but only partial reach? There is no universal phone and online access yet. I don’t see that happening in India in the next 10 years,” says writer, filmmaker and media observer Amit Khanna.

“We will need to assure privacy. It shouldn’t be that a person is voting with the political leader sitting next to him or her.”
Sudheesh Pachauri, Media commentator

Security, however, will continue to be the biggest worry of a virtual polling system. Can identification be authenticated cent per cent? And how does one ensure that a person is voting out of his or her own free will? Also, what if it’s hacked? “Yes, we will need to assure privacy,” says Pachauri. “It shouldn’t be that he or she is voting with the political leader sitting next to him.” Or, even worse, a goon pointing a gun to the voter’s head and forcing a vote for him. “If, despite the sophisticated security, the Pentagon site could be hacked, then we need to look at it with care and concern. If banks can be looted online, then the fear of the EC or the government being looted online is worse,” says Quraishi.

But experts liken e-voting to the e-banking process. If password-driven online and mobile banking and e-transaction facilities weren’t safe, why would anyone expose his/her own money? They say the current manual system is much more prone to mani­pulation as opposed to a technology-based one. It would be impossible for someone to go and vote on another’s behalf if there was a physical ID like fingerprint or iris scanner system in place. A person would then either have to corrupt an existing database of voters or alternatively go to hundreds of voters and coerce them to vote in his or her favour.

The voter’s sole influence matters in e-voting, it does not have to be physically supervised by representatives of governmental authorities. That isolation and facelessness, in fact, can be empowering in terms of decision-making, goes the argument. “I am not saying it cannot be hacked but it would be a lot more difficult than striding into a voting booth, waving guns and making the election officer sit quietly while you go in and hit the same button 400 times,” says Dubey.

“It will make voting less of a bureaucratic process than it is now. All this can be skipped if all one had to do was log in and click.”
Nimish Dubey, Associate Editor, My Mobile

Despite this, e-voting is not a popular system worldwide. Even electronic voting machines are used just in four or five countries. The US and Europe still use ballot paper. India could make a smaller start, say with the armed forces or nris. Or perhaps test and implement it at the panchayat and municipal elections.

Then there’s the social dimension of the exercise. Doesn’t technology rob the community spirit of the act of going out and voting? Of seeing an Anil and Mukesh Ambani stand in the same queue as a commoner or seeing filmstar Chiranjeevi being berated for jumping the queue? “It’s a festival of democracy. There is a sense of participation, the feeling of a carnival,” says Quraishi. For Pachauri, the Indian election plays out like a Ramlila. All this will go missing.

Mishra is dismissive of all this sentiment. He calls it “sheer nostalgia that has to take a backseat”. He does admit to enjoying the act of going out and voting, but says that electronic voting will potentially open up the democratic process to more people. “In a seat where a thousand votes could make a difference, e-voting would lead to a more fair election,” says Mishra. What might actually see a sharp decline, thinks Dubey, are those “inked fingers”. And, of course, their selfies on social networking websites.