Anything For A Lifu Fish

Head chef Barun Baruah, a ‘Bangal’ has further honed his culinary skills by working in countries across the globe. 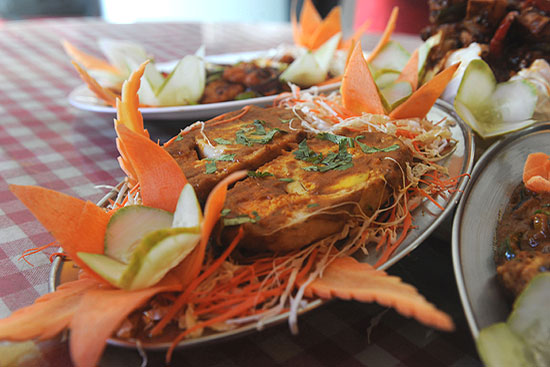 If you’re driving down Baroda Avenue in Patuli—on the outskirts of Calcu­tta—around lunch time or dinner, drop in at Palki. A ‘multi-cuisine’ restaurant which specialises in Indian, Chinese and Tandoori, it serves up delicious pre­p­arations of fish and meat. Head chef Barun Baruah, a ‘Bangal’ (those who trace their roots to East Bengal, now Bangladesh), and who are famous (and a tad snobbish) for their cuisine as well as their culinary abilities, has further honed his culinary skills by working in countries across the globe.

“But no one quite appreciates food like Bengalis do,” Baruah insists, and so has returned to Calcutta. He fusses over his customers as though they were house guests.

If he’s around, ask him to rustle up a meal of Lifu Fish, a mouth-watering medley of spices in which succulent pieces of bhetki has been marinated over just the right amount of time and cooked Oriental style. Or you could have the Pudina Kabab meal—a mint-green chicken concoction to be had with buttered naan and a hint of lime. On the other hand, if mutton is more your type, go for the mutton biriyani.

Though indeed many of the dishes on the menu are familiar fare, like the chicken tikka kabab and tandoori fish, the mix of spices seems to be a distinguishing factor.

Other than a glass partition on which an image of an ornate palki or doli being carried by four bearers is embossed, the decor is rather nondescript. The emphasis seems to be squ­arely on the food itself.