Anxieties Of A Scattered ­Industry 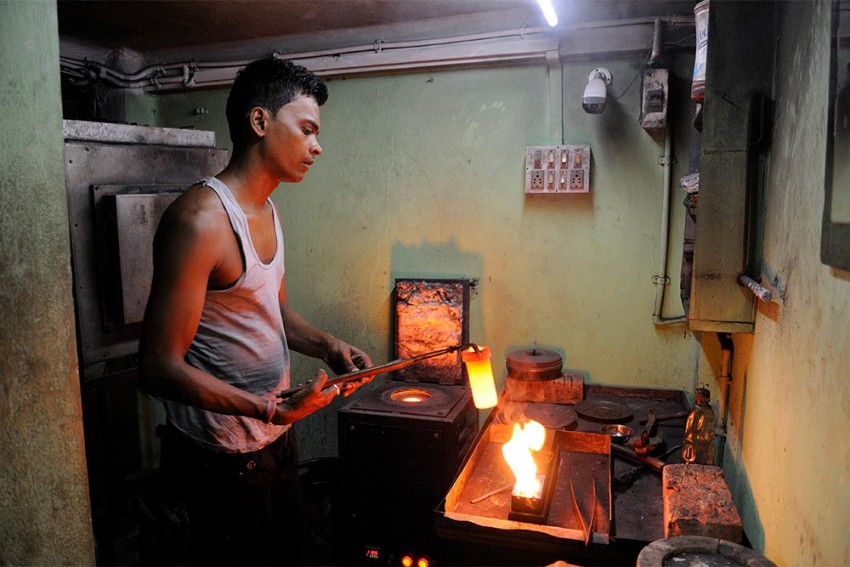 Hot Pot
At work in the gold industry; an unorganised yet efficient sector
Photograph by Getty Images
Lola Nayar December 15, 2016 00:00 IST Anxieties Of A Scattered ­Industry 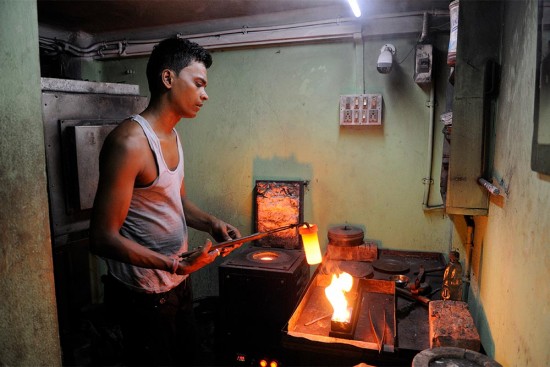 Demonetisation may have put a question mark on the government plans for roll-out of the Goods and Services Tax (GST) from April 1 next year, but it has whetted the desire of hundreds of micro, small and medium ­enterprises (MSMEs), particularly manufacturing units in the informal sector, to move to the formal sector with its rules and regulations, specifica­lly labour and tax payout.

A direct collateral of demonetisation and the low cash supply scenario, has been thousands of workers in the informal sector being let off as hundreds of units in the sector have downed the shutters, albeit temporarily. Anil Bhardwaj of the Federation of Indian Micro & Small and Medium Enterprises (FISME) clarifies, “There have been no layoffs but as many of the units dealing only in cash transactions have temporarily shut down operations, the workers have been sent away. Majority of the workers, almost 70-80 per cent, in these units are daily wagers.”

India has a massive informal sector, which accounts for over 85 per cent of the total workforce. While majority of the informal workforce is engaged in the agr­iculture sector, around 37 per cent is in the manufacturing and services sectors. Lack of enforcement of labour laws or gaps in reforms have led to a significant number of labour working in micro and small units without basic minimum wages, let alone facilities such as paid leave, medical care or other social securities.

In a memorandum to Prime Minister Narendra Modi on December 12, FISME President Sangam Kurade has sought amnesty for their members to help them transit to the formal sector without being hit by additional costs of compliance with labour law and any past tax levies.

“The existing cash-based informal economy, which constitutes over 90 per cent of all enterprises and accounts for most of the employment in the country, other than in the government and the corporates, is not yet ready for cashless economy and GST,” Kurade states in his letter.

“A comprehensive ‘amnesty’—a kind of safe passage, is needed especially in two spheres (a) taxation (direct and indirect tax) and (b) labour/social security along with assurance that the government mac­hinery will also be reformed and made to work for the good of the nation and not to serve vested interests,” it states.

Recent government initiatives on digital transactions and utterances that a less cash-dependent economy is being envisaged have added to the concerns of small and medium units that only a transition to a formal sector could protect their operations or else the price may be too big to pay.

Dinesh Singhal, managing director of Meerut based Kanohar Electricals and past president of FISME, states that lack of cash post demonetisation and the pressure of the proposed GST is creating pressure for companies in the informal sector. While the companies are keen to make the switch and comply with the regulations, the compliance cost, which is around 32 per cent more, is very prohibitive. There is also the fear of the tax authorities.”

By nature the informal sector, which inc­ludes small units manufacturing plywood, handloom, sports goods, handicrafts and a host of other goods mostly in the consumer segment, competes only on the basis of lower labour costs. Running on low profit margins, many would not have to fear tax authorities, but on other issues like environment, sanitation and labour regulations, they may be found falling short of compliance or even violating them. In many cases  it carries its own cost—of having to bribe inspectors who are more keen on lining their pockets than ensuring compliance with laws.

Sudha Pillai, former secretary, Planning Commission and labour, is happy that dem­onetisation has brought about some change in the operations of small and medium units through the push towards digital transactions. “When you pay through electronic mode or through cheques, the exact number of employees in a unit will be revealed. Many of the companies claiming to operate with less than 10 employees will not be able to cheat on labour dues and will have to comply with the rules and regulations for units in the formal sector, particularly social security and other benefits to the labour,”

Labour experts and economists see considerable gains to the government and the country in terms of better work environment and revenues besides scaling up of operations of companies if the transition does take place.

Dr Pranab Sen, former chief statistician of India, points out the desire of FISME members is understandable given that “under the GST, unless they are registered and paying taxes, they would lose their customers, especially if they are in an intermediate state in the value chain.

“What demonetisation has done is to push these units to the banking system thereby bringing them under the tax net. But inc­ome tax only comes in provided you are making enough profit—a lot of these guys would probably be under the excise and income tax threshold, but the labour laws kick in at a very early stage.” 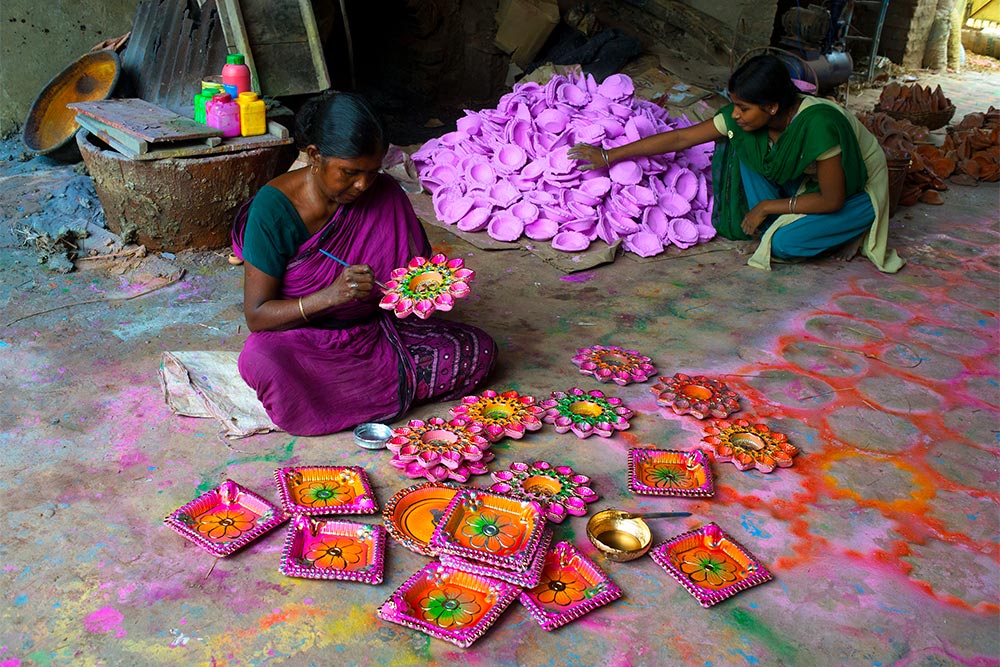 A pottery unit in Bengal

Sen is of the view that while medium size units should be registered anyway and not given any amnesty, small units should be asked to register and given X number of years to operate without the labour laws applicable for units with 10 or more emp­loyees.  Without the pressure of non-compliance, these units would be able to expand, invest in technology to improve production and also generate more employment.

This thinking almost resonates with that of the RSS-affiliated Bharatiya Mazdoor Sangh (BMS), which in 2013 had raised the proposal for exempting SMEs from too many labour laws. “At the Indian labour conference in 2013, there was an agreement of having a different set of rules for SMEs, but unfortunately, it has not been addressed. Unless it is, the government will not be able to resolve issues of social security, minimum wages and other prerequisites,” states Vrijesh Upadhyay, general secretary of BMS.

“If the FISME demand is met, it would be a positive step in bringing more ent­erprises into the formal economy,” he adds. According to BMS estimates, there are around 2.30 crore small units in the country that are not registered anywhere. Assuming each has a ten-member workforce, it totals to a humongous number that would join the formal sector and be able to enjoy better protection under the law in terms of minimum wages, work conditions and other social securities.

CPM MP Tapen Sen is, however, not convinced of FISME’s demands calling it a “dubious intention to get some concessions”. He alleges, “The present policy dispensation is designed to make more people shift from the formal to the informal sector at a much bigger and speedier pace than bef­ore…..The labour law reforms proposed by the government, if passed by Parliament, would see more than 70 per cent of workers in the formal sector being transferred to the informal sector as the ave­rage labour laws like the Factories Act and the Industrial Disputes Act will not be applicable to many units with the government proposing to lift the threshold.”

Beyond the political posturing in the aft­ermath of demonetisation, there is general consensus among policy makers and exp­erts across the political divide that GST is going to be a major reform that would not just ensure better tax compliance but also ease the way business is done. Whether the government responds positive to the FISME demand or not, the proposed GST may prove a reality check for thousands of companies to shift to the formal sector. The risk of course is that it may well eat into the competitive advantage of many export-oriented units depending on low costs to woo foreign buyers.

An Unkind Cut In The Cane