On his being sacked by Zee from Sawal Dus Crore Ka 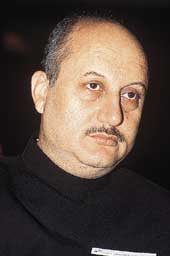 At that point, did you think Manisha too was out?
Yes. That was the impression I was given. But now I learn she is very much there.

How do you react to this whole mess?
I am deeply hurt. My contract says that I have to be notified 60 days in advance and that too in writing. But this thing reeks of unprofessionalism.

Do you feel like a scapegoat?
Obviously. When a programme doesnt do well, everybody points fingers. And they found me. I would have understood if the whole team was revamped.

Are you planning to sue Zee?
At this point, I havent decided. But I dont rule anything out.

Hasn't Zee let you down badly?
When they searched all over and were rejected by Madhuri,Shabana and others,I decided to stand by them and do my best. Initially,I was told that Manisha would appear only during the inaugural show. But later I figured that she was a part of the show,which I didn't mind.

Do you feel cheated?
I have missed out on four or five films for the game show.

Are you still going to shoot for the game show?
Yes. I am shooting on the 18th and 19th of December.

How many episodes have you already shot in advance?
Some 20 episodes.

What do you think of Ashutosh Rana as your replacement?
I called him up and wished him good luck.