Strong-arm tactics are the bane of Indian society. It's infected our industry too. 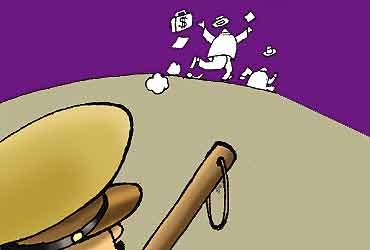 outlookindia.com
-0001-11-30T00:00:00+0553
Some years ago, when McDonald's—which is to hamburgers and fast food what Coca Cola is to aerated soft drinks—was summarily ordered to move its prime outlet in downtown Beijing to another location, it suddenly found out that in China a contract did not necessarily mean what it meant in the West. Two weeks ago, the $1.3 billion German firm Dragerwerk, which deals in medical equipment and supplies, found out that in India even habeas corpus does not necessarily mean what it does in the West.

At 10.00 pm on the night of June 29, Claus Grabowsky, the ex-CEO of Drager's Indian collaboration, Usha Drager, received a phone call from the Delhi police. The message was cryptic: he, his legal advisor at the firm, Reinhard Frick, two other German staff and seven Indian ex-employees of Usha Drager were about to be arrested. It seems they were facing nine criminal charges of trying to strip Usha Drager of confidential information and clients. Since finding a lawyer and a judge at 10 at night to get anticipatory bail was next to impossible, the two left the Imperial and spent the night hotel-hopping till they arrived at the German embassy the next morning. The embassy put them on a flight to Mumbai and got them out of the country within hours.

No one knows how the two managed to get a good samaritan in the Delhi police, but the advance warning saved them from being pulled out of the luxurious Imperial hotel—rated one of the best in the world—and spending at least one, and possibly many more days and nights in an un-air-conditioned cell in a squalid jail at the humid heights of the Indian summer.

The charges had been levelled at them by their Indian partners, the Usha group, owned by the Rai family. Founded in 1989 as a 50:50 joint venture to manufacture and supply medical equipment for the Indian market, the company had issued shares during the liberalisation epoch that followed. It's not clear where exactly the two partners fell out, but the Rais were able to round up a majority of shareholders on their side, eject Grabowsky from the CEO's post, appoint a new board member and use their majority to take away cheque-signing powers and assign it to other complaisant members. Usha thus took control of the company.

Drager then did the only thing left in its power. Having recently acquired Siemens' medical business abroad, it applied for permission from the Foreign Investment Promotion Board to set up a wholly owned subsidiary in India. The Rais immediately lodged an objection on the basis of a 1998 law that required foreign firms with joint ventures in India to get their partner's permission before opening wholly-owned subsidiaries. Drager responded by saying that permission wasn't necessary since the products it intended to market did not conflict with its business with Usha. But it failed to convince the fipb, which rejected its application on June 14. Drager went to court, and the court stayed all proceedings till it had delivered a judgement.

So far the battle had been no different from the scores that erupt every year in industrialised countries. But it was here that India ceased to look like Europe and began to resemble China. In sharp contrast to the West, when someone lodges a criminal complaint, the police in India do not conduct an investigation into the prima facie sustainability of the charges. Here the police arrests the accused first and investigates later at its leisure, while the latter languishes in jail. Although Indian criminal procedure is based upon English common law and recognises the right of habeas corpus, in practice a succession of small amendments over the decades has now made it possible for the police to hold a person in jail for as long as 60 days without having to file charges against him. At the end, they simply let the person go and, because of a clause in the Indian Constitution that grants civil servants immunity from prosecution without the permission of the governor, the wronged person can't even file a suit for damages against the police.

Over the years, these draconian powers have become powerful tools for harassment and extortion. In 1992, V. Krishnamurthy, ex-chairman of the Steel Authority of India, secretary, heavy industry ministry, and one of the best manager-technologists the country's ever produced was jailed first for six weeks because his son's name appeared on a paper during a fera investigation. He was released and no charges were ever filed, because the police could find nothing to charge him with. But not before he had a heart attack.

In 2001, Shankar Sharma, a 13 per cent shareholder in a company everyone will remember, Tehelka, spent 60 days in jail while the Enforcement Directorate struggled without success to make up some kind of case against his brokerage firm, First Global. Again imprisonment came first, investigations later. These were causes celebres that made the newspapers, but ordinary people face this threat everyday. This is where the practice of looking for political godfathers has sprung from.

On June 30, the Rais used this tool of harassment against a foreign company for possibly the first time in Indian corporate history. By doing so, they did not save their company. Drager can cut off supply of equipment, components and technology to Usha Drager whenever it wants. It can also simply export its equipment to India directly through a normal importer. What Usha has done however is to gravely damage India. It has shown foreign companies that they are not safe in India because their chosen representatives are not safe. It has therefore given them one more good reason not to invest in India.

In his budget speech, finance minister P. Chidambaram announced the creation of an Investment Commission to attract fdi to India. It won't get far if the rotten structure of our legal, administrative system is not reformed first.