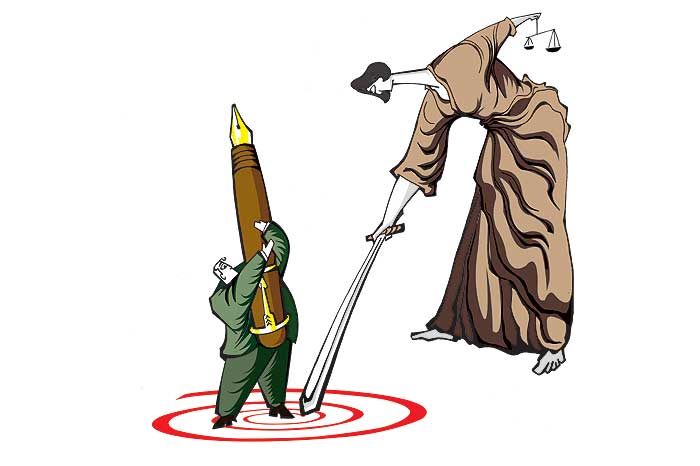 Two years ago, a senior police officer of Uttar Pradesh addressed a press conference, perhaps his first, updating the media about the investigations into the murder of the teenaged Arushi Talwar. His statements made headlines. “They (the young girl and a domestic help, who was also killed) were found in an objectionable though not compromising situation,” he said. Inspector-General (IG) Gurudarshan Singh, perhaps a parent himself, didn’t flinch when he spoke those lines, over which he should have agonised before going live in front of TV cameras. The media lapped it up, even using  his statement as a springboard for speculation.

Senior CBI officers who were later brought in to investigate the case too kept releasing sensitive information scraps that offered context to the media, keeping the focus firmly on the teenager’s parents, dentists Rajesh and Nupur Talwar. In order not to break service rules, these officers would ensure they were quoted as unnamed sources. But what they offered—even if mere speculation—would be souped up into full-fledged reports, often garnished with pontifications. The well-established practice of verifying statements before going on air or into print was ignored by sections of the media—everything related to the murder was fodder for ‘news’.

Those reports came to haunt the media last week when the Supreme Court, in an interim order on a PIL, asked the media to exercise caution in cases under investigation. It said: “We restrain the respondents (several media houses) from publishing any material which has the effect of interfering with the investigation.”

Though the order clarified that “this will not prevent either the electronic (or print) media from publishing information which does not interfere with the investigation or seek to sully the character and reputation of the victim or prejudice the defence”, it has widely come to be read as a gag. The opinion on this is as startling as the order itself.

First is the interim order—not a judgement—itself. Was the court justified in passing it? And is it applicable to all cases under investigation? Prashant Bhushan, a Supreme Court advocate, says, “The media cannot escape responsibility merely by quoting sources unless what is given out is part of the chargesheet.” While he says the public authority cannot escape censure, the media is to be held equally accountable for its reports and can’t enjoy privilege against defamation. Usually vocal in his support for the media, Bhushan does say the order is a consequence of trial-by-media in several cases and therefore will normally apply to all cases under investigation.

“Power of the press has to go hand in hand with responsibility. Some sections are guilty of overhype.”
B.G. Verghese, Former editor

The implications of such an order are immense. For media investigations into court cases are essentially interventionist. Criminal cases, by nature, score high on the popular interest quotient, and society has a right to know and be informed. Print and TV are like a watchdog and cannot be, as has often been said, a lapdog. And source-based information is central to any report filed by the media on an ongoing investigation. How, for instance, is the media to report on the ongoing CBI investigations on Amit Shah, former home minister of Gujarat? A question that should be asked is: Isn’t it because of a vigilant media that the spotlight remained firmly on the principal characters in the Sohrabuddin Sheikh encounter case? What about the course of the Jessica Lall or Nitish Katara murders—all the result of relentless investigation by the media—that led to landmark judgements? Save a few transgressions, the courts acted on them only because of vigilant media action.

“The challenge would be to see and spell out what really amounts to ‘transgression’ and ‘perceived excess’; it will have to be balanced with the media’s right to fair reporting and comment,” says Anish Dayal, a senior advocate at the Supreme Court. And it’s this that leads to a serious division of opinion.

While not commenting on the interim order, Justice G.N. Ray, chairman of the Press Council of India, says, “The media must act responsibly on issues that require sensitive handling.” Clearly, there is more than one view on how the Arushi case has come to be reported. While a section argues that the media overreached in arriving at conclusions, there is another that believes the bounds of acceptable media behaviour haven’t been defined yet. B.G. Verghese, a former editor, says, “Power of the press has to go hand in hand with responsibility; some sections are clearly guilty of overhype.” He says the role of public authorities like the police has not been above board. But while the media is victimised and under pressure, that cannot justify its conduct.

“The media cannot avoid responsibility by quoting police sources unless what’s reported is in the chargesheet.”
Prashant Bhushan, Advocate

“Generally speaking, the courts have the right to adjudicate on issues of balance between the right to privacy and what the public needs to know and be informed about,” says advocate Dayal. “There cannot be untrammeled powers with the media. There have always been restraints, either by self-regulation or judicial intervention. Courts have the power to prevent any interference in the administration of justice and if there is any act which does so, there is no doubt that courts can either pass strictures or give cautionary directions.

The apex court has also asked the Union information & broadcasting ministry to make available guidelines, if any, which may have been laid down with regard to the publication and release of information by the investigating  authorities to the press and also with regard to suspension or cancellation of licences of the electronic media for violation of such guidelines. While the ministry has time and again served notices to channels seen as violating its programme code, it is not known whether there is a code for investigating authorities.

In the aftermath of 26/11 Mumbai, the media, which was pilloried by the government for compromising on the security of the country by its wall-to-wall reporting, was asked to formulate a self-regulating guidelines for news. This was done by the News Broadcasters Association. Despite the code, the ministry, it is learnt, has embarked on a fresh ‘self-regulation’ exercise all over again.

So far, there has been no hint of reining in public authorities. Ironically, on the rare occasions they chose to share sensational information, they have not been pulled up for their transgressions.