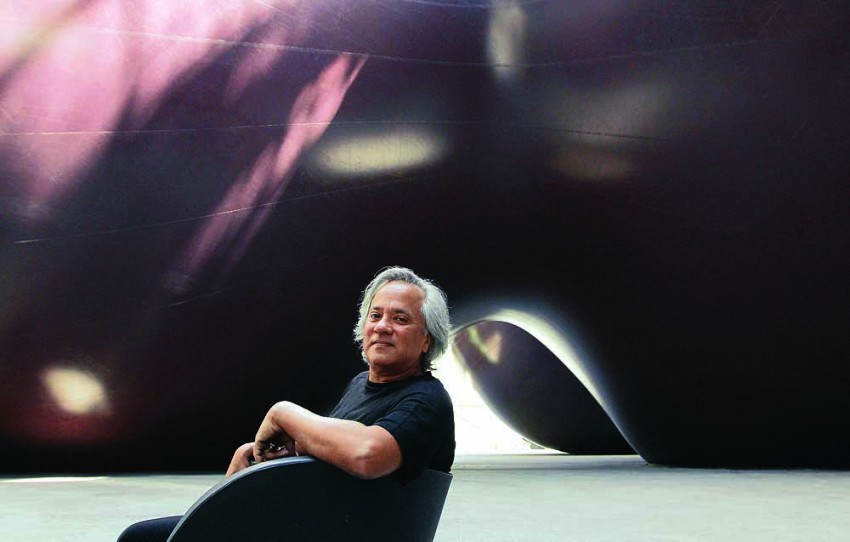 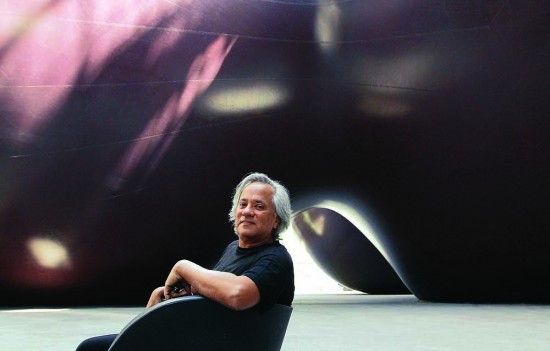 British sculptor-artist Anish Kapoor is as Indian as Mother Teresa is Albanian. But claiming him as ‘one of us’ is a claim made well. For, hasn’t the 59-year-old Mumbai-born Kapoor, who left India for Israel in his teens, been a master manipulator of space for the last 30 years? Not only have viewers been drawn to his geometric and biomorphic objects like those early humans to the Black Monolith in Kubrick’s 2001: A Space Odyssey, the surroundings in which these objects are placed also change because of their very presence. In this, his sculptures—some less solid than others, some building-like structures rather than conventional sculptures—share formal and aesthetic qualities with architecture. One can see a fateful menage a trois in one’s head of one of Kapoor’s giant, dimpled space curvatures, the cantilever jigsaw of Howrah Bridge in Calcutta and a Henry Moore sculpture.

Kapoor does not aim to depict ‘abstracted’ human forms or provide ‘flesh’ to emotions. His monk-like ‘formations’—whether giant, orbital structures bouncing the world off their steel surfaces or the heaps of uber-colourful shapes with sindoor-like texture on a white exhibition floor like Holi decorations—are mathematics given form. And if there’s one thing that highlights this old Doon School boy’s oeuvre, it’s his ability to capture the void.

Not only are viewers drawn to his geometric and biomorphic objects, the surroundings where he places them also changes.

Kapoor can make nothingness out of something. In Double Mirror, thanks to the curvature of the two polished surfaces facing each other, instead of throwing an endless series of reflections when the viewer stands between the two mirrors, nothing “appears”. “I’ve always been interested as an artist in how one can somehow look again for that very mom­ent of creativity where ‘everything’ is possible and ‘nothing’ has actually happened,” Kapoor has said about his art. This line of thinking makes him a disciple of playwri­ght-writer Samuel Beckett whose depictions of “nothing happening all the time” Kapoor gives a strange tactile form.

There is also a ‘Hall of Illusions’ quality to his art that’s not far from the works of the Dutch mathematics-inspi­red graphic artist M.C. Escher. Take Kapoor’s Sky Mirror. This work in Nottingham, with versions of it in New York, St Petersburg and elsewhere, is a six-metre-wide concave mirror of polished stainless steel tilted towards the sky like a cable television dish. The effects of its surroundings—whether passing clouds or empty sky or bits of tall buildings—reflected on its surface are astounding in their scale and simplicity. As the artist puts it, it’s about bringing “the sky down to the ground”.

This aesthetics-at-ground-zero appeal to Kapoor’s art was made most evident in two 2010 shows at the National Gallery of Modern Art in New Delhi and at the Mehboob Studios in Mumbai. For a general public that takes pride in “not getting” challenging contemporary art, Kapoor’s works intrigued and startled and reminded people what art at its finest can do to even “unbelievers”.

Whether Kapoor could have been the artist he is today in a culture almost devoid of popular art criticism and that actively discourages Brave New Art is doubtful. But as Kapoor said in the press conference earlier last month in the German capital at the opening of the ongoing ‘Kapoor in Berlin’ retrospective, “I have nothing to say. But the artistic process has a lot to say. And the transformation of material through process is meaning.”

Which explains much of the immense value of Anish Kapoor—yes, India-born, Mumbai boy, Indian—as one of the most important contemporary artists in the world today.

(Indrajit Hazra is a Delhi-based novelist and journalist.)