The redoubtable Mumbai-born, Doon school-bred sculptor, hailed by the world press as "the winner in a class of his own", "a mountain" and "a new star" , on his art, his roots and his fondness for inside-out spaces 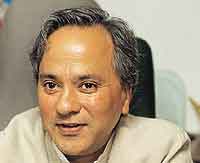 How do you deal with being both an Indian and a Britisher?
I am very confident of my roots. My father's a Punjabi Hindu, my mother's Jewish, I live in the UK and my wife is German. So I'm an outsider at both places and also at home.

Your work was initially labelled as Indian, exotic. How did you react to that?
I was also called a women's artist. Then my work was called Indian/Exotic because I used bright colours. That infuriated me.

Will 'Kaash', the musical for which you've designed the sets, come to India too?
Yes, but we haven't decided on the venues yet.

Does the absence of a sculpture scene in India sadden you?
It does, especially because we have such a rich sculpture heritage.

Do your works always have a message?
No. My works are about a single moment.

You are fond of using inside-out spaces.
To make new art, you have to make spaces. This corresponds with our mythology and I think of space that way.

You do a lot of site-specific work?
I don't. It's just that they get talked about more.

What inspires you.
The material things around us.

The Dice Rolls In Bidda's