They are from an age when man was still learning to walk. Today, they are trampled, crushed. 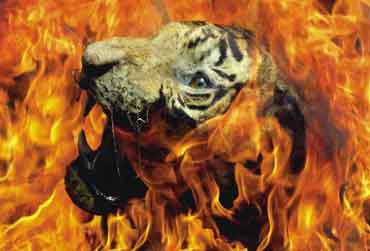 Experts believe this is a do or die battle. Says P.K. Sen, former director, Project Tiger: "We're facing the biggest tiger crisis, since the project was instituted in '73. Today, at least five of the 27 project reserves are outside management control. And Tiger Reserves constitute just one-fourth of total tiger habitat." In Rajasthan, Sariska reserve is depleted, Ranthambore is on red alert. Panna in Madhya Pradesh is in dire straits after 21 young adults and nine breeding tigers have gone missing in the last two years, reveals a study by senior wildlife biologist Dr Raghunandan Singh Chundawat.

This widespread tiger loss squarely impacts the Congress-led government, since Indira Gandhi introduced Project Tiger, while son Rajiv Gandhi was the first PM to hold a meeting in Sariska in the '80s to focus on this magnificent carnivore. In less than two decades, Sariska's jungles are echoing with the stomp of forest guards looking for pugmarks with no tigers sighted here for many months.