Can you have a parody of a satire? Yes, if you visit the house Orwell was born in. 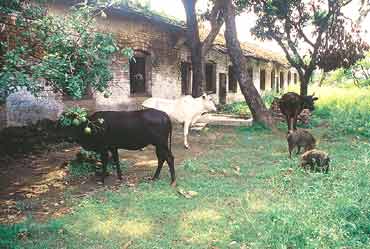 outlookindia.com
-0001-11-30T00:00:00+0553
"The animals began to arrive and make themselves comfortable after their different fashions. First came the dogs and then the pigs who settled down in the straw. The hens perched themselves on the window-sills. The pigeons fluttered up to the rafters. The sheep and cows lay down behind the pigs and began to chew the cud. The cart-horses came in together, walking very slowly and setting down their vast hairy hoofs with great care lest there should be some small animal concealed in the straw. After the horses came the white goat and the donkey. A brood of ducklings filed in cheeping feebly. Last of all came the cat who looked round for the warmest (or coldest) place and purred contentedly...."
—George Orwell, Animal Farm

It is life imitating art, well almost, at the sprawling compound of the house where George Orwell was born as Eric Arthur Blair on June 25, 1903. Exactly 100 years on, Blair's 10-acre birthplace is a rundown, shambolic menagerie and belongs to the teacher's hostel of the local Gopal Sah school in East Champaran's Motihari town.

Blair was born in a single-storeyed house, near an old opium warehouse, where his father Richard Walmsley Blair was an opium inspector. An earthquake in the early '30s nearly flattened the area, but Orwell's home survived. Only to lie in ruins today, overrun by enthusiastic animals, not quite as downtrodden as in Orwell's 1946 fable of a worker's revolution gone awry. Young Eric lived here for a few months under the care of an Indian ayah till he, his mother and sister were shipped back home to England—in 1904—never to return to India. 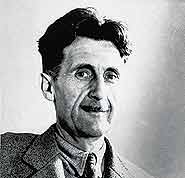 It's a good thing he never did. He wouldn't have liked what he saw. Peeled-off paint, cracked walls, and thick hedges hiding the doors and windows of the house he was born in. The tiles on the roof are slipping, pigeons and sparrows having nested there. Dogs have the run of the place, while cows and goats graze happily on the grass growing wild in the compound; there are snakes in the grass too. The Musahars, the 'untouchables' who rear pigs and eat rats, have a settlement close to the house, and often let their pigs in.

But ask Brijnandan, the English teacher who has made Orwell's house his home and he'll tell you that he and his family take great pride in living in a house where the famous litterateur, political satirist, novelist, columnist and scribe was born. "We are taking care of this historic house putting our lives to risk," says the schoolteacher, sitting beside a huge cactus plant growing close to one of its walls.

Today, most of the townfolk know that a "mahan lekhak" (great writer), somebody called "Jaarj Arwil", was born here. One local doctor calls him "John Orwell" to this date. But when British journalist and Granta editor Ian Jack came to Motihari in search of Orwell's birthplace in the fall of 1983, he found "its citizens have never heard of Big Brother". Also, that nobody except the district magistrate had ever heard of him and even he didn't know he was born in Motihari. With much difficulty, Jack sought out the crumbling whitewashed bungalow. "Not a lot of people visited Motihari," Jack recalls. "But I was very well received. People were very hospitable. I reached the place in a rickshaw. I always thought the place needed better upkeep." 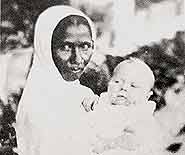 As a six-week-old Eric Blair with his Indian ayah

Other journalists and research scholars from home and abroad who have been visiting the place in the last two decades would agree.Sometime back, Bihar's education secretary asked the East Champaran district magistrate to remove the encroachers from the place, but nothing came of it.Last Wednesday, when some local scribes and social workers organised a small meeting to observe Orwell's birth centenary, district magistrate Seokumar spoke about talking to the Union ministry of culture and approaching nris in the US and UK to fund a memorial.Some grass had been cleared and dry clay laid out on the muddy sidewalk outside the place in honour of Seokumar's presence. But there was no talk of the district administration doing anything to spruce up the place. "The district officials came here for the first time in recent memory," said one resident.

Though Orwell wished to return to India, to his roots in a tangential sense, it would not have been because of Motihari. As Jack says, "He was taken back to Britain when he was just about a year old, so Motihari cannot have been much of an influence on his life directly. But his father, who was posted from place to place in Bihar for 20 years was an influence. So the Raj must have affected his life through his father."

The senior Blair returned to England in 1912. But yes, Jack says, the "whole Empire influenced him". Now the empire has struck back rather unkindly, consigning Orwell's birthplace to the dustbin of history.