The 'working girls' of TN's temples earn a platonic honeymoon in the hills, courtesy a mercurial CM 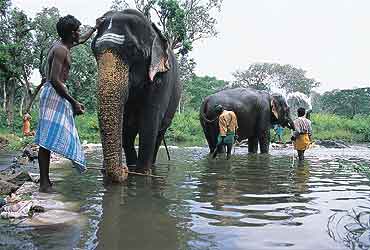 Two years ago, after storming back to power, Tamil Nadu chief minister J. Jayalalitha donated a 12-year-old elephant to the Guruvayur temple in Kerala on the advice of her astrologer Unnikrishna Panikker. In July 2003, a hungry cow elephant in a Chennai temple ran amok and the temple had to be closed for a week. Jayalalitha was moved. She declared a month-long annual holiday for temple elephants in the state and ordered a rejuvenation camp. "It is our duty to protect all animals. Especially, protecting the elephant, which is the largest land animal and most helpful to humans, is our important duty," the Puratchi Thalaivi (Revolutionary Leader) observed. Around the same time, the TN government informed the Supreme Court that it was common for labourers in Tiruvarur district—the state's rice-bowl now reeling under a drought—to eat 'robust rats' and denied they had been forced to adopt such habits due to starvation. Several newspapers reported the starvation deaths though. Moral of the story: TN's rats remain robust in drought, not peasants. But shouldn't the fate of rats be of equal concern since they bear the weight of the elephant-headed Ganesha?

For now, however, back to Theppakkadu, 40 km from Ooty, in the Mudumalai wildlife sanctuary, where 37 of the 41 temple elephants and 18 of the 40 privately-owned elephants in the state are participating in the 'rejuvenation camp'—sponsored by TN's Hindu Religious and Charitable Endowments ministry—till December 15.