And Then There Remained One

A right royal drubbing—in Rajasthan, MP, Chattisgarh—singes the Congress. And Mizoram, the one that got away. Riches to rags would be a bad way of putting it. In Raja­sthan, the Congress collapse can  be termed a grandeur-to-dust story—a historic defeat if there was one. In one str­oke, Rajasthan’s ruling party has shrivelled from 96 to 21 seats.

There are many reasons for the Congress’s dismal show. Fir­stly, it fell to one per­son—CM Ashok Gehlot—to counter the opp­osition, manage the campaign and promote his flagship projects. Curiously, he got little Central and state support. Yet, Geh­­lot had little say in the distribution of tickets. His  eff­o­rts were also undermined by the collective end­e­­avour of RSS and BJP workers, as also—­unlike in Delhi, MP and Chh­at­tisgarh—the pal­­­pable influence of Narendra Modi.

Actually, Vasundhararaje, the BJP’s CM can­didate, expected to win 120 seats, far less than the 162 the party got. Not as popular as she was in 2003, Vasu­ndhararaje recognised early on the need for a decisive push. Her request for Modi’s attention bore spectacular fruit. The BJP’s PM candidate addressed 21 rallies in Rajasthan, whereas Congress president Sonia Gandhi addr­es­sed only two and Rahul addressed five. It fell upon Gehlot himself to be his party’s ‘star campaaigner’. In the end, he couldn’t even cover all districts. His rally tally: 50 to Vasundhararaje’s 87.

But is the Congress intent on self-destruction? “We are not. We still need to look into the reasons for such a bad defeat. We underestimated the strong Modi factor, which actually helped Vasundhara gain momentum,” says a senior state Congress leader. “The CM was overconfident and there was little synergy between the government and the organisation. Undervaluing our own leader and his works is the reason behind this mandate,” he adds. “Look at the poor planning. Ministers are accused of rape and sexual harassment. Vasundhara made it an issue. She even said that the state government is distributing poison, not medicines. No one countered it. There were no women Congress campaigners who could have countered the false claims,” laments another leader. 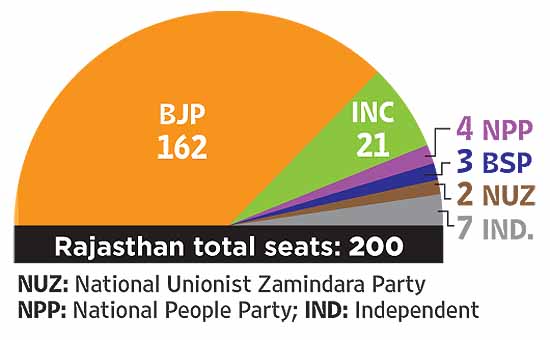 Rajasthan was the laboratory of UPA-1 and 2 for their much-touted experiments with social welfare schemes. But the tests have turned in miserable results. Yet, surely, the unkindest cut is reserved for the forthcoming Lok Sabha polls, where the BJP could be expected to win over 20 seats. At present, the Congress has 20 MPs; BJP has four. In Rajasthan, the assembly poll winner usually carries the day in Lok Sabha elections. BJP leaders are already licking their chops. “We are winning all 25 parliamentary seats this time,” says Tiwari.

By Panini Anand in Jaipur 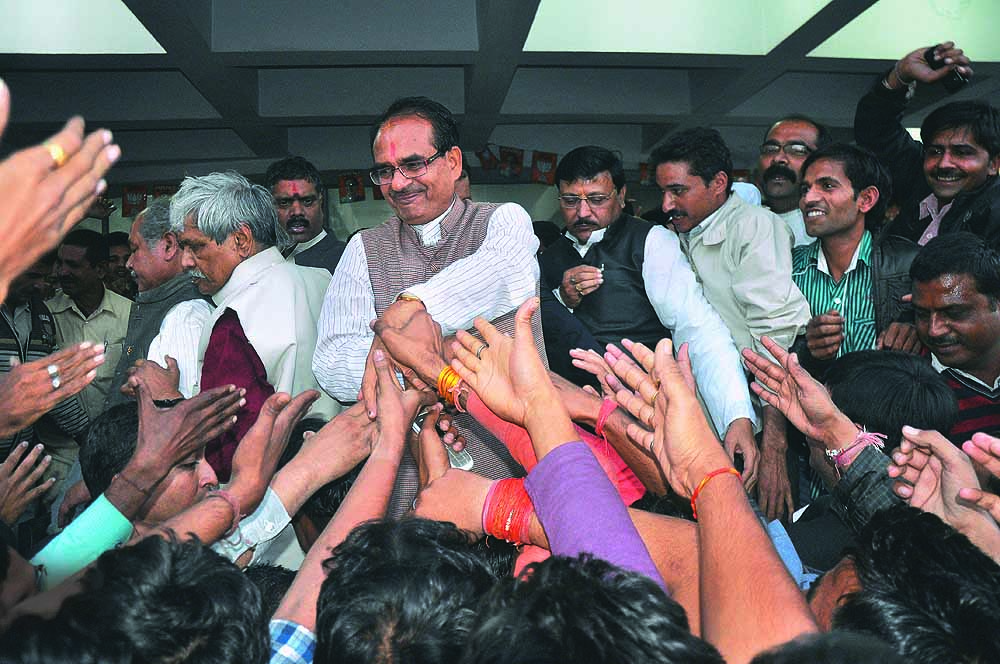 They are calling it the ‘saffron tsunami’. It’s the BJP landslide that blasted all cautious predictions of CM Shivraj Singh Chouhan retaining power with reduced strength. Even Chouhan’s own nervousness, betrayed when he chose to contest from two seats, turned out to be unwarranted. The party went on to increase its vote share by as much as 7.71 per cent, which translated into 22 additional seats and a tally of 165. A poorly-led, fractious Congress could only muster 58, down from 71 in 2008.

Rarely has a state government returned to power with increased strength, points out BJP leader Vijesh Lunawat. The BJP’s massive win increased the gap in voteshare between the two parties from just four per cent in 2008 to nine per cent.

While corruption among the incumbents was a factor, and 10 of the 32 ministers, including stalwarts Anoop Mishra, Laxmikant Sharma, Ajay Vishnoi and Ramkrishna Kusmaria did lose, the anti-Congress verdict was led by women affected by high prices, argued a senior Congress leader who lost himself. Chouhan’s own popularity, simplicity and hard work also paid off, added BJP spokesperson Hitesh Vajpayee.

And importantly for the BJP’s spin-doctors, Narendra Modi’s whirlwind campaign added a strong push—the party made a clean sweep wherever he campaigned. In the Gwalior-Chambal division, it won 20 out of 34 seats; in the Indore-Ujjain-Malwa-Nimar region, where Modi addressed six rallies, the BJP grabbed 55 of the 66 seats. The Congress even lost the Gwalior city seat—in Jyotiraditya Scindia’s backyard.

All seven seats in Jhabua district, from where Kantilal Bhuria is the Congress MP, went to the BJP. Another Union minister, Kamal Nath, failed to prevent the loss of assembly segments in Chhindwara. Suresh Pac­hauri, a Congress stalwart and Rajya Sabha member, lost in Bhojpur, despite campaign support from Congress heavies Scindia and former CM Digvijay Singh.

The disunity in the Congress ranks—at its most glaring in the barely-contained conflict between Digvijay and Scindia—was not papered over by a phalanx of leaders on the dais. The dag­­gers were out soon. Congress MP Satyavrat Cha­­tu­r­vedi, among others, painted Digvijay as a malcontent res­­­­­p­onsible for the debacle and the one who plotted the Congress defeat. 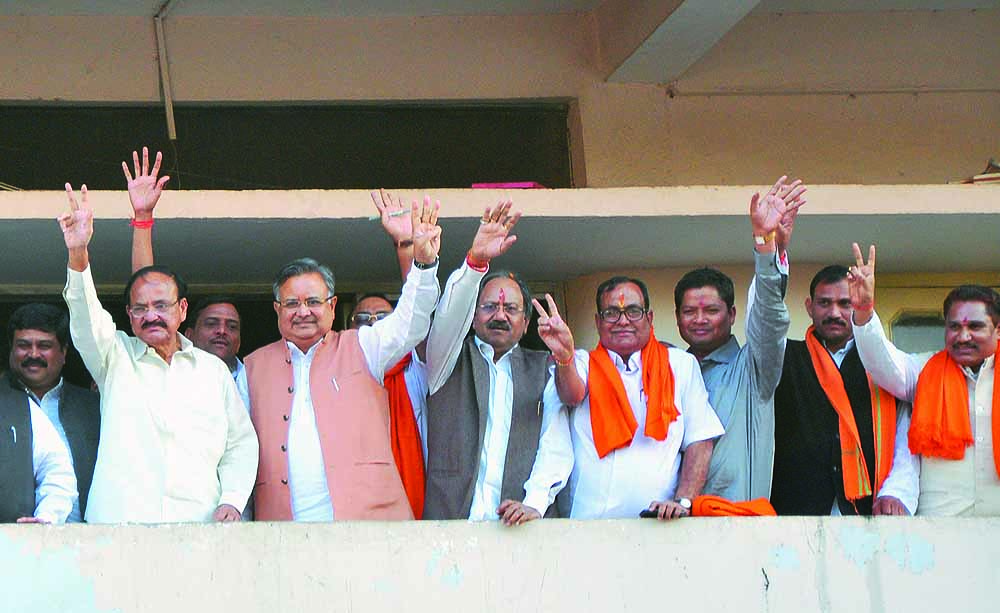 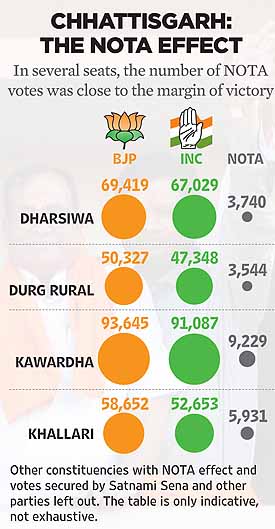 Compared to the other three states, where it limped past the post behind the winners, it was a close-run thing for the Congress in Chhattisgarh. The consensus here: that it wrested defeat from the jaws of victory. “If only we had followed Rahul Gandhi’s formula in the second phase....” rues a sombre Charandas Mahant. The Union minister and pcc president now privately admits that state leaders had prevailed upon B.K. Hari Prasad, the AICC secretary in charge of Chhattisgarh, and party president Sonia Gandhi to retain sitting legislators. Dreading a mutiny in its ranks, the Congress fielded 36 sitting MLAs. Twenty-eight of them lost. Only two of its candidates were new; both won.

Party stalwarts admit that the ‘Rahul formula’—that asked for replacing old and unsuccessful candidates—was followed in Bastar and Rajnandgaon in the first phase of polling. The party had won three out of 18 seats in 2008. This time, they won 12. While there was sympathy for the Congress after several of its leaders were killed by Maoists in Bastar’s Darbha Ghati earlier this year, the party followed Rahul’s order and denied tickets to MLAs who had lost by a margin above the specified threshold in the last Assembly or Lok Sabha polls. Many of the new faces actually won.

Voters, however, punished sitting MLAs unanimously. Of the outgoing House, 64 out of 90 members lost. Among the 28 Congress MLAs who fell by the way were five ministers and the assembly speaker. Anti-incumbency targeted candidates more than it did parties, says the Congress’s Amit Jogi, who won by the highest margin in the state. 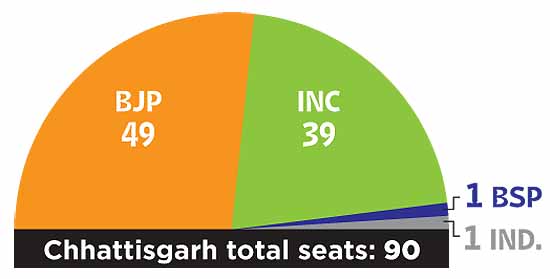 Part of the Congress’s poor show is also attributed to an indiscretion by Amit’s father, controversial former CM Ajit Jogi. While he was persuaded to stay out of the fray, Jogi queered the pitch by asserting that he could still end up with the top job if Sonia Gandhi so desired. It was duly pounced upon—Nar­endra Modi dared the Congress to declare its CM can­didate.

Contrary to expectations, Scheduled Caste ‘anger’ against the state government for reducing reservation for SCs by four per cent failed to affect the BJP: it won nine of the 10 seats reserved for SCs. The hurriedly formed Satnami Sena­—targeting 12 lakh SC voters who decided the outcome in 40 seats—was largely ineffectual. It campaigned vigorously for its own candidates, split anti-BJP votes in the plains and the reserved seats, and made dents amongst votes that would otherwise have gone to the Congress. Preliminary figures suggest it hurt Congress prospects in 14-19 constituencies. It’s now believed that the party, and its cadre of helicoper-hopping Dalit priest campaigners were set up by the BJP for just that purpose. 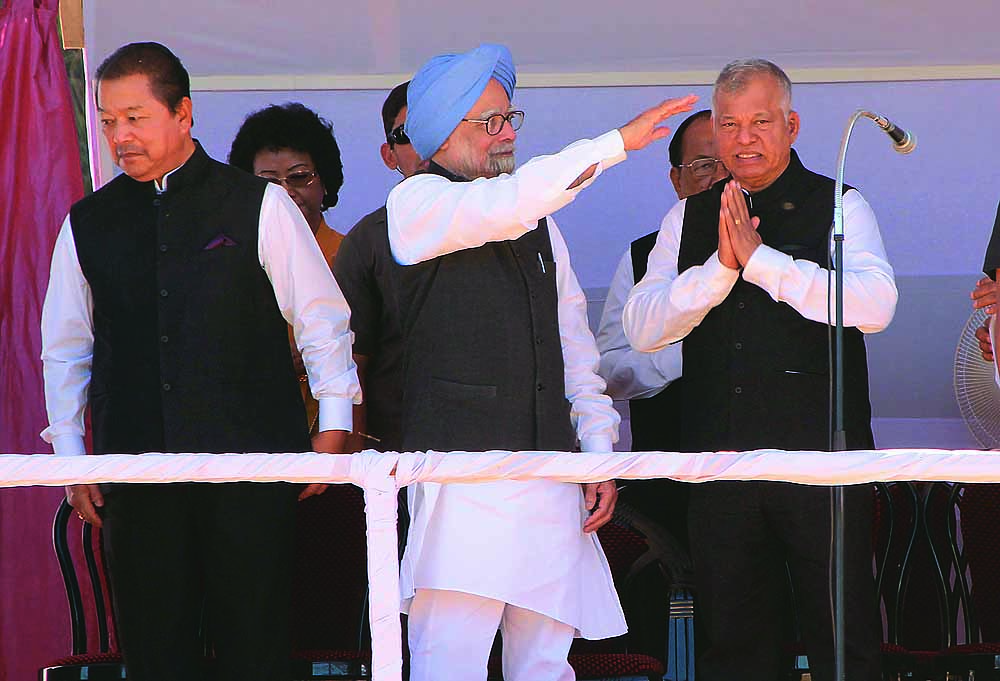 Manmohan Singh with Mizoram CM Lalthanhawla at a rally. (Photograph by UB Photos) 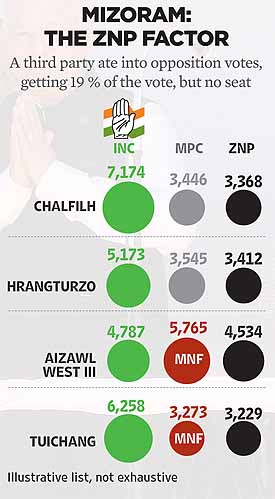 So tectonic was the loss for the Congress on Sunday, the day when election results from states other than Mizoram came out, that its emphatic victory in Mizoram the next day went largely unnoticed. Led by CM Lalthanhawla, the battered and bruised old party romped home in the Northeastern state with 34 seats out of 40—two more than it held in the outgoing assembly.

In an election fought on local issues, away from the anti-Congress discourse that prevails in much of north India, the opposition MDA, comprising the Mizo National Front (MNF), Mizoram People’s Conference (MPC) and the Maraland Democratic Front (MDF), managed to get just six seats.

As if the rout wasn’t enough, veteran opposition leader and former two-term CM Zor­amthanga lost Tuipui East to bureaucrat T. Sangkunga, now a first-time MLA. Much of this windfall has been attributed to the New Land Use Policy (NLUP), a programme the Congress government launched in its last tenure, under which farmers are given `1 lakh each to improve their income. The party won about 45 per cent of the votes; the MDA secured around 35 per cent. The BJP, which has no presence in the state, won less than the votes polled in favour of the ‘nota’ option—0.37 compared to 0.66.

A key reason why the leading opposition parties, the MNF and the MPC, failed to win more seats is the performance of the Zoram National Party. While it has had a traditional voteshare of around 12 per cent, this time the znp managed to get 19 per cent, playing spoiler for the opposition. “In many constituencies, they came second and in others a close third. Had it not been for them, the opposition MDA could have won around 16 seats. They have definitely helped the Congress,” says MPC secretary Michael Lalthanmawia. 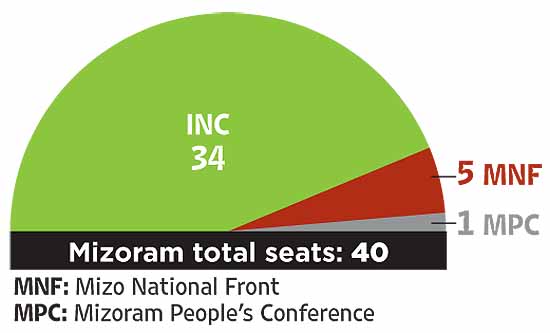 But the MDA is accused of sidelining key issues. “Instead of taking up lack of good roads and reliable electricity supply as issues, they were raking up a non-issue like the CM applying tilak,” adds Lallianchhunga, assistant professor of political science at Mizoram University in Aizawl.

In a state where the Church has been lauded for helping keep a strict vigil on electoral campaigning—so strong is its hold that results were not declared on Sunday—a lot remains to be done when it comes to the involvement of women in politics. Despite having the highest share of female voters in the five states that went to polls, only six contested. None of them won.