And The Alarm Would Go, One, Two, Cha-Cha-Cha

Refugees from the streets, killers from next door, the terrible violence inside us 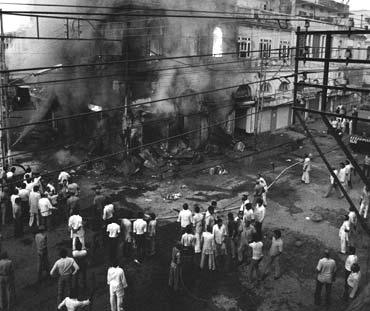 On October 31, 1984, I was 27 years old and I had been teaching history at Jamia Millia Islamia for just over a year. I was living with my parents at the time and within an hour of knowing that Mrs Gandhi had died of her bullet wounds, I set off on my daily five mile ride to Malcha Marg, a street in Delhi’s diplomatic quarter, Chanakyapuri, where my girl friend lived. I usually took a bus to the Central Secretariat and then another to Sardar Patel Marg, but that evening, I waved an autorickshaw down. I should have stayed home but our prime ministers till that day had all died of natural causes or were still alive—we didn’t know, by default, the sensible thing to do.

The auto stopped moving near Kamal Cinema because of the traffic. The road that led to the Safdarjung Club was jammed and there was shouting. I looked out in time to see a driver being pulled out of a stranded DTC bus, pulled down, actually, from the high door by the driver’s seat. Then the autowallah found a path down the wrong side of the road and we crossed the Ring Road into Chanakyapuri.

This was before satellite telecasts or 24-hour news channels, but you didn’t need television to tell that something was wrong. BBC World Service reported that Sikhs were being attacked. I thought about staying the night, then decided to get back to my parents. There were no autos puttering about when it was time to go home so I looked for a taxi.

The drivers from the mainly Sikh taxi stand in Malcha Marg Market had mostly disappeared. The one taxi available was driven by a short-haired man without a beard. He agreed to make the journey provided we went the long way round: Shanti Path, Rao Tula Ram Marg and then home via the Outer Ring Road. He thought that would be the safer route because there was trouble in the city.

He was wrong. There was trouble to spare on the Outer Ring Road. Near Munirka, the road narrowed because hundreds of men had taken it over. We inched along, windows rolled down to show we had nothing to hide. Headlights and smudgy streetlights lit up men with lathis and in my memory all of them are smiling or laughing. Certainly the man who stopped the taxi was smiling. He asked the driver if there was anyone else in the car when it was clear there wasn’t. The driver shook his head, so the smiling man made him open the boot. I heard the boot open and close, then the man was back at my window. He stuck his head in and peered into the dark leg space between the front and back seats. "Chalo," he said and we made our way slowly through that vigilante crowd. Elsewhere on the streets, the madness erupted. Those who drive the lifeline of our commerce, the Sikh truckers, became the target of an unreasonable ire.

It was nearly ten o’clock by the time I got home but my father who opened the door didn’t seem anxious. My parents had guests. Two young men, younger than I was then, were housed in the back bedroom. They were salesmen, friends, one Sikh, one not. Soon after I had left for Malcha Marg, the bus they were on was stopped at Kamala Nehru College, across the road from my parents’ house, and the Sikhs pulled out. The way the non-Sikh boy told the story, the mob was distracted by a fuller bus, more prey, and the two of them managed to slip away from the chaos of marooned commuters and marauding Sikh killers. They crossed Siri Fort Road and walked into Anand Lok where my parents lived. They wouldn’t be able to do it now: there’s a gate there, permanently locked, but this was 1984, and the gated locality was a few years in the future.

My parents’ house was the second one they tried. The owners of the first one wouldn’t have them. The curtains in our house were drawn and we had our conversation with these two refugees from Delhi’s streets in the windowless passage in the middle of the house. Except that only one of them was really a refugee: the other boy was there in solidarity, but the streets were safe for him.

The Sikh boy’s mother came the next morning in a Fiat driven by a clean-shaven man, a relative, perhaps, or a friend of the family. The mother had brought a hand-knitted cap for her son to wear in place of his turban. They lived in Rajouri Garden in West Delhi. Two months later, when she returned with her son to meet my parents, she said that there had been mobs on the way but they had no trouble because he had been crouched, out of sight, in the leg-space between the two seats.

In the week that followed, I and many of my friends gathered at Lajpat Bhavan to do relief work in the name of Nagarik Ekta Manch, a citizens’ group centred in Lajpat Bhavan. This consisted of doing several different but connected things. We made bundles of blankets, medicine, utensils, cooking things, matches, basic rations to help Sikhs in the camps start over again; we went to school buildings turned into camps in the trans-Yamuna colonies where most of the killing was done, to write down the testimony of women who had seen their husbands and sons and fathers burnt to death. We marched through parts of Delhi to protest the targeted killing of Sikhs, police inaction and the Congress party’s complicity. Apart from one confrontation with a mob in Ashram, we experienced the unsettling immunity conferred by our being not-Sikh in a city that had briefly become an engine for killing Sikhs.

In 1984, I was writing my thesis on communal politics and communal violence in UP in the decade leading up to Partition. In the newspapers of the ’30s and ’40s, the blame for communal riots was often directed at outsiders. In Trilokpuri, though, we learnt from widow after widow that the mobs that had killed their menfolk had been made up of their neighbours, people who had spent evenings watching television in their homes. Deathly stillness enveloped the legendary bustle of the Delhi railway station as bodies of Sikhs piled up all around.

When I got home every evening from Lajpat Bhavan, I returned to another world. In Anand Lok, the neighbourhood in which my parents and I lived, there was a mohalla meeting to discuss security on the third night of the violence. No one actually said so, but the reason for the meeting was the rumour that bands of vengeful Sikhs were about to attack mainly Hindu neighbourhoods. The previous night someone we knew had woken us up to tell us not to drink water out of the tap because Sikhs had poisoned the Okhla reservoir. At the meeting, able-bodied men were assigned guard duties. Someone asked how, if we sighted a mob, were we to raise an alarm, because making phone calls would take too long. A middle-aged man in a cravat suggested that the guard who made the sighting ought to get into his car and honk out some simple sequence of sounds that we all recognised; like One, Two, Cha-Cha-Cha.

The pogrom of 1984 brought home to metropolitan middle-class people like me a truth that had long been understood in provincial towns: that one of the uses of the Indian state was the organisation of large-scale civil violence. The general election that followed the pogrom demonstrated that violence of this sort could be electorally useful: the Congress under Rajiv Gandhi won its largest majority ever. It won it on the back of an advertising campaign that used unsubtly coded messages to encourage Hindus to vote for the Congress. One advertisement asked people made nervous by their taxi-drivers (who in many cities in India were largely Sikh) to vote for strong Congress rule. And they did. No one who was old enough to think in 1984 will be surprised by Narendra Modi’s election victories after the Gujarat pogrom of 2002.

In India we bank on time and forgetfulness to paper over the great rents in our history. They help but they can’t do the job by themselves. As I write this, the courts are still struggling with cases about 1984 lodged 20 and more years ago. South Africa’s Truth and Reconciliation Commission made the point that there can be no peace without the acknowledgement of guilt and public contrition. Unpunished pogroms license murderers to order up more of the same. 1984 led to 1992 just as certainly as 1992 cleared the ground for the killings in Gujarat 10 years later. 1984 and its misbegotten children taught us a life-defining truth: no country can tend to its living without accounting for its dead.

Novelist, historian and cricket writer, Mukul Kesavan’s collected essays, The Ugliness of the Indian Male and Other Propositions, have been published in 2007.

Gandhi In The FIFA?