And Some Came Back 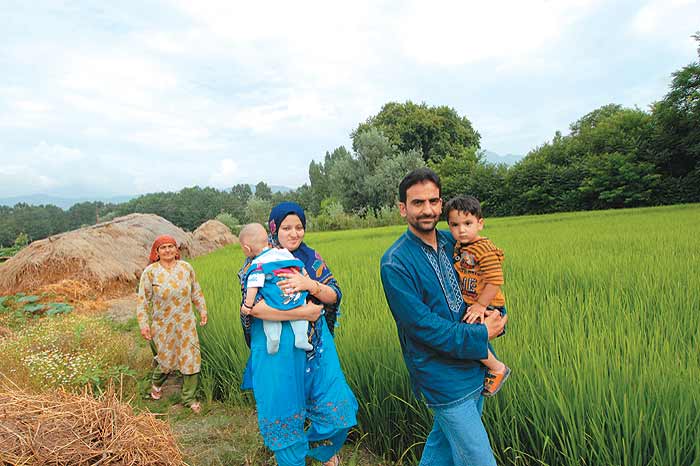 Talking about normalcy in Kashmir can be as perilous as negotiating the minefields along the Line of Control (LoC). One false step, one incident mishandled can shatter months of carefully wrought calm in the Valley. What has gone largely unnoticed, however, is a story playing out in the interiors of the state, perhaps the best “good news” from this trouble-torn state in a long time: Indian militants who had gone to Pakistan-occupied Kashmir (PoK) to join the Kashmir movement during the last two decades have started trickling back to the Indian side, to lead normal, peaceful lives—quietly, fearfully, but very surely.

Just 9 km from the LoC, on the foothills of the Pir Panjal mountain range, in Kupwara district, is a small village called Batpora. In the early 1990s, hundreds of young men from Batpora and other neighbouring villages had taken a narrow mountain path to cross into PoK and join the ranks of militant organisations operating from camps there. Some had been lured by outfits like the Hizbul Mujahideen and the Muslim Jaanbaaz Force. Most of them are dead, shot while infiltrating or in encounters by the security forces. 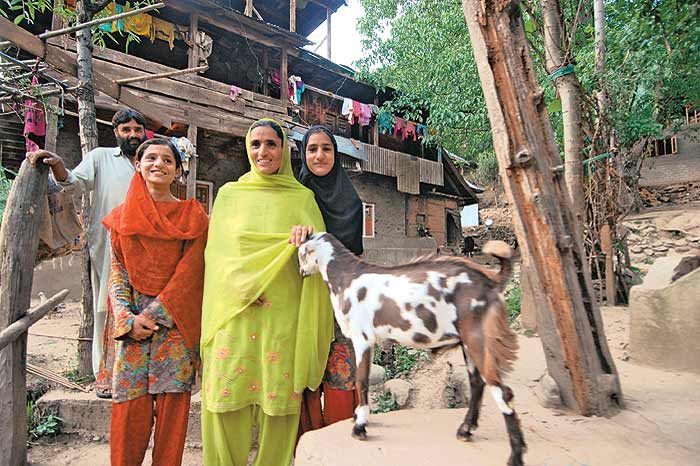 Bashir Ahmed Mir, Batpora, Kupwara After 18 years in PoK with the Muslim Jaanbaaz Force, he returned to India on May 11 and is serving a jail term. Seen here, his wife Ameena, and daughters Sameena and Naseema.

One lucky survivor of that mortally charged game is Bashir Ahmed Mir. On May 11 this year, he quietly slipped into India from Nepal, with his wife Ameena and his two school-going daughters. Locking their house of 15 years in Muzaffarabad, PoK, they obtained illegal passports and visas to reach Nepal. They told their neighbours they were going to attend a wedding in Kathmandu. “It was a harrowing eight days, the journey from Muzaffarabad to Batpora,” says Ameena, now in her ancestral home in the Valley. “We lied and bribed our way through. If we’d been caught, the retribution would have been harsh.”

The irony is hard to miss. Some two decades ago, when they went across, they had done it clandestinely, to avoid detection by the security forces or intelligence agencies; their return has been just as secretive—they had to hoodwink Pakistan’s ISI, the militant group Mir was affiliated with, friends, acquaintances, neighbours. And just as illegal.

The return of Mir and many others like him began last November, when the Jammu and Kashmir government, in consultation with the central government, announced an amnesty and rehabilitation policy for people who had gone across for arms training but wanted to return and lead normal lives. Relatives of those who had gone across between 1989 and 2009 and wanted to seek amnesty could fill up a form at the local police station. The government would take a lenient view of their offences—illegal crossing, obtaining passports from the Pakistani administration of PoK, past militant actions—and even provide assistance in beginning new lives. More than 700 families have been emboldened by the improved situation in the Valley to make such applications to the government. Many more are coming forward day after day.

Disillusioned after years spent pursuing the militancy game, many men are risking their all to come home.

The screening process is rigorous and is meant to ensure that hardened militants intent on trouble do not gain entry and amnesty. Thirty names have been cleared so far, and the Indian high commission in Islamabad is to issue travel documents for crossing the LoC to India at any designated crossing point. But there is a catch: not one of those whose names have been cleared has returned by this method. Here’s why: Pakistan’s official position has always been that it isn’t funding or providing arms training to Kashmiri youth in their secessionist activities. “Therefore, it’s unthinkable for the ISI and the militant organisations that encouraged these people to cross over to PoK for training to allow these trapped ‘combatants’ to simply walk back, reach home and tell the stories of their disillusionment with the separatist movement, the hardships they underwent, the betrayals,” says a police officer. The ISI and militant groups can’t allow any such acknowledgement of Pakistan’s trouble-making in Jammu and Kashmir. So if one of these disillusioned militants—who are probably under surveillance anyway—visits the Indian high commission or otherwise receives travel documents, he runs the risk of being eliminated, by either the ISI or the militant group he belonged to. These are what Union home minister P. Chidambaram calls “practical problems” of amnesty schemes for militants.

The ones who have returned have done so using their own ingenuity, running a great risk, faking passports and visas, lying, bribing officials and guards to enter the country from Wagah or via Nepal. Some have returned even before the government has completed the screening process and cleared their names on the basis of applications filed by their parents. “My mother did fill up a form, but we returned on our own,” says Fayaz Ahmed Khandy, now in Pulwama, who returned with his Pakistani wife and two children on June 6. “We were encouraged to return on hearing of the government’s amnesty scheme.”

Just as their departure was facilitated by guides and agents who took them across via mountain passes in the heady first years of the separatist movement, a network of agents and couriers has now sprung up to facilitate their homecoming. According to Jammu and Kashmir police, there are some 3,000 Indian Kashmiris eager to return from PoK. Here is Khandy’s story in his own words: “When my efforts to get a passport as a resident of PoK failed thrice, I obtained one by paying Rs 33,000. An agent in Islamabad put me in touch with a courier in Nepal and our visa was for visiting his house. We bought return tickets to show our intent to return. In all, I ended up spending about Rs 3 lakh to get my family safely through. I sold my shop in Islamabad to raise the money.” For those taking the Nepal route, like Khandy, an essential step is to destroy their PoK passports and visas on reaching that country. Then they slip into India via the porous border.

Khandy says he used to work as a driver for the Hizbul Mujahideen in Islamabad. He married a Pakistani girl from Rawalpindi. When the “salary” from the militant organisation he worked for became erratic, he set up a small mobile phone shop. Since coming back—and having served a small jail term—he has found work as a truck driver and is trying to rebuild a peaceful life here. 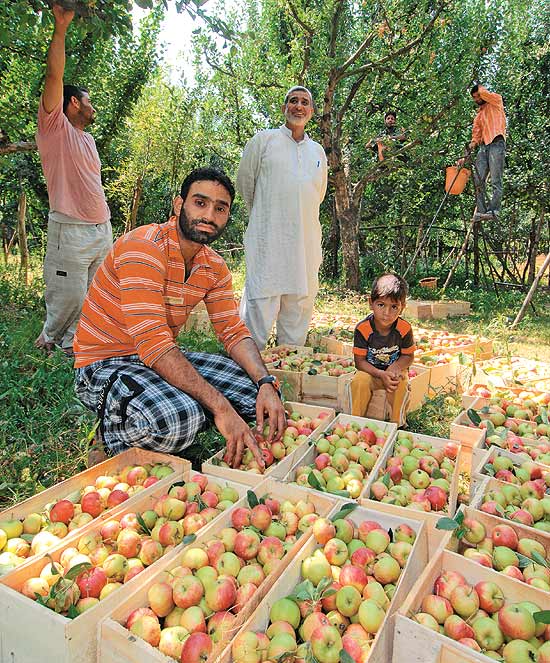 Showkat Ahmad Ghanie of Chanderhama, Pattan Ran away with friends to join the Hizbul, says he left the camp and took up studies in Muzaffarabad. All his “friends dead”, he returned on April 24, after 13 years.

For most returnees, doing that is the hardest part. The surveillance and suspicion of the security agencies—even of neighbours and acquaintances—is hard to cope with. Showkat Ahmed Ghanie, 30, of Chanderhama in Pattan, returned after 13 years. The police says he took training at a Hizbul camp in PoK so he will never be able to get a character certificate that employers seek. But his father, delighted his son’s return, doesn’t care. “He was getting paid for doing nothing there, but there was no peace of mind—neither for him, nor for us,” he says. “Now, he looks after our orchards.”

The security forces, however, say it isn’t as if there is no cause for concern over PoK returnees. “Besides the risk of active militants entering Kashmir, there is also the very real danger of the infiltration of agents who will set up sleeper cells,” says S.M. Sahai, inspector-general of police, Kashmir range. Army and police officers say they are awash with requests from parents of boys who had gone across to join the militant ranks. They say that while they do direct parents on to the “legal channels”, they are nevertheless wary of such requests.

It’s also not clear how the ISI—which otherwise is known to keep a close watch on militant groups, with Indian recruits required to report weekly to handlers—is turning a blind eye to their “escape”. Is it because the boys who went 15 or 20 years ago are now in their 30-40s, unfit for active operations and demotivated? Many who did not join active operations and dissociated themselves from the tanzeems (militant outfits) after the first few years are considered a drain on the establishment. The Pakistani government pays them a monthly mohajir (refugee) allowance, revised recently from Rs 1,500 to Rs 3,000, in addition to the salary the militant group paid them. “On the face of it, it seems they are deadwood for the Pakistanis, who now want to be rid of them,” says Sahai. “But we still need to be cautious.”

The exercise of that caution quite often spills over, in practice, into police excess. Ghanie, for example, faces a vexing problem. “Ever since I returned, the police wants me to ‘surrender’ some weapon and ammunition before them,” he says. “I know it will improve their promotion prospects, but how am I to get weapons to surrender? Illegally?” Unlike him, Khandy compromised. He says he let the police “plant a Chinese pistol and some ammunition” on him. He says he feels bitter about the incident. But many returnees are wont to treat such incidents as mere pinpricks. The sheer relief of returning home safe and getting on with a normal life can’t keep the smile off their faces.

The Flag Is Chequered