And Raja Will Have To Dig In His Heels 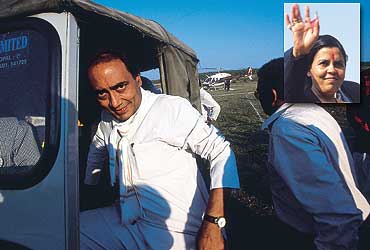 The Gujarat effect may travel to the tribal belt, a BSP-BJP tie-up and Uma could mop up Dalits-OBCs

It will be the toughest battle for the BJP. Though chief minister Digvijay Singh will soon complete two terms, everyone is agreed that he is the smartest and most charismatic of the Congress CMs. He was first off the blocks after the Gujarat verdict, saying that he "feared an attempt to trigger riots in Madhya Pradesh". It was a smart move to send a warning to the BJP and Sangh parivar that "any attempt to create trouble will be crushed. I won't allow it". No one doubts that Digvijay Singh will do precisely that.

There is, however, a direct fallout of the BJP's phenomenal success in tribal Gujarat on the adjacent tribal pocket in Jhabua. The Bhil tribal belt extends between these two states and Maharashtra. The fact that the BJP did so well there has worrying implications for the Congress in MP. Says BJP Rajya Sabha MP and state unit chief Kailash Joshi, "The work of the Vanvasi Kalyan Ashrams run by the vhp and rss will undoubtedly help us in tribal pockets." Former bureaucrat and activist Harsh Mander, who knows the region, well grants him that: "Over the years, the Congress has worked less and less for tribal justice. It is this vacuum that the Sangh organisation has been quietly filling in tribal pockets for over a decade. The manufacturing of the Muslim as the enemy in tribal pockets has been a remarkable phenomenon for me to see." Joshi points out that the rss organised a massive Hindu sangam in Jhabua last year. "We have all been working in our separate ways among the tribals," he says.

Digvijay Singh will really have his back to the wall should the BJP-BSP alliance too materialise. Scheduled Castes make up 14 per cent of the state's population and though the bsp is a minor player on its own, it has a dedicated votebank in parts of the state. In the Bundelkhand, Bhind and Morena belt bordering Uttar Pradesh, this alliance could have real synergy. The fact that Mayawati went to campaign for Modi is being read in BJP circles as a sign that she will go along with a state-level alliance before firming up a national alliance for the general elections. Says Joshi, "I don't think such an alliance is necessary as the state is already polarised between the Congress and the BJP. But if the high command insists, we will go along with it." In spite of objections raised by state units in both MP and UP, both Vajpayee and L.K. Advani are reported to have made up their minds about such an alliance. It's because of the bsp threat that Digvijay has been trying to create a front of Dalit bureaucrats but political observers say it's too early for such efforts to fructify.

Besides the tribal and Dalit cards, the BJP believes Uma Bharati represents a potent mix of backward caste and Hindutva. Starting December 26, Uma will start travelling across the state—though she has refused to resign from the cabinet and take charge of the state unit. Although Muslims form just 5 per cent of the state's population, they are visible in pockets like Bhopal, Uma's Lok Sabha seat. If necessary, Uma can don her Hindutva garb in these pockets and do a bit of rabble-rousing. But over the years, she has mellowed and has assured supporters that she will not raise the pitch to Modi's level. As a Backward Lodh, she is equally comfortable playing the caste card. But what should really worry the Congress is that she is a charismatic five-term Lok Sabha MP and one of the most effective campaigners the BJP has.

Clearly, it will be a high-pitched battle in MP.One that the BJP and allied organisations have been preparing for for years. They will use every weapon in their arsenal. Yet they admit it'll be a tough call. What role does terrorism play in this scenario? According to Joshi, none. "It's not an issue in our state. It's anti-incumbency which will count."