More than a foreign correspondent's diary, this is an informed, evocative, honest view of India in the '90s 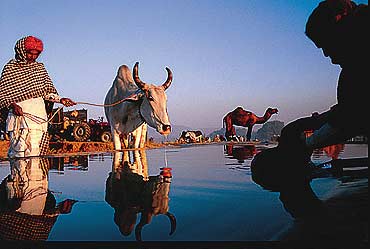 Inhaling The Mahatma
By Christopher Kremmer
HarperCollins Pages: 400; Rs: 495
Most foreign correspondents writing on India get their quota of quotable quotes from the usual suspects of the Delhi durbar. Christopher Kremmer has one too. But his publishers have failed him in not getting this one on primetime television when Parliament was in session last month. It would have rocked Rajya Sabha.

It’s a quote with a cash value equivalent to Jaswant Singh’s "mole" claim. Except, this time Jaswant would have paid the price! Kremmer quotes a "Western diplomat" who was with Jaswant when the latter received the call informing him of the Pokhran-II tests. After the call was over, Kremmer quotes the unidentified diplomat as saying: "(Jaswant Singh) brought us into a tight group around him, and said, ‘You won’t believe this—India has just tested. Only five people knew. I have to go on TV tonight. This is dumb, dumb, dumb’."

But that is just about the only ‘Breaking News’ stuff in this warm look at India of the 1990s.

Every statement about India, and its opposite, can be true. So anyone can write a book on India and get some part of the story right. I have, thus, no quarrel with Kremmer’s view of India. Every foreign correspondent has a desire to write a book about his beat, and more of them seem to be doing it these days. Clearly, the India story has a market.

Like Edward Luce’s much acclaimed book, In Spite of the Gods, this is also more than just another foreign correspondent’s diary. Like Luce, Kremmer also has a dual identity. He was a foreign correspondent based in New Delhi, working for the Australian Broadcasting Corporation, and is also a son-in-law of India.

Like Luce, Kremmer too seems to have a happy marriage going, if one is to measure it by his view of Indians. There are the usual cliches about India, including the title of the book and the cover picture, but the book itself is not a cliche. It is a warm, honest and evocative view of India in the 1990s.

Kremmer arrived in India around the time Rajiv Gandhi was assassinated. His second stint coincided with the election of the upa government. So the book captures India circa 1990 to 2005. A decade and a half of economic and political change.

All the major events of the period have been written about. All the changing social and political equations. The economic story travels from Manmohan Singh’s 1991 budget to his return to government as prime minister. The political story covers all the ups and downs of the 1990s. The social story captures everything from women’s empowerment in rural India to Page 3 parties.

Married into an old Delhi family, Kremmer had the opportunity to get to know north India better than the rest of the subcontinent. So the book doesn’t capture the depth and breadth of change in India in the 1990s because a large part of that change occurred in western and southern India.

Where Kremmer is different from most foreign correspondents writing on India is in his understanding of the heady mix of materialism and spiritualism that shapes the modern Indian psyche. He has read his Bhagwad Gita and the Mahabharata well. And, his interest in Indian spiritualism is neither skin-deep nor just a fashion statement. There is empathy in the writing.

What of the Mahatma’s legacy has Kremmer inhaled in India? Clearly on top of his list would be India’s pluralism and diversity. That is the appropriate and most relevant legacy of our national movement to inhale and take in deeply. India may be hot news globally because of the improved performance of our economy and the impressive performance of our professionals. But what marks India out is its unique pluralism, wrought in the heat of the national movement when Indians of all faiths, languages, cultures, ethnicities forged a national identity based on the idea of "unity in diversity".

Kremmer is impressed by the fact that this legacy has survived through the rough and tumble of post-Independence development and politics. Eschew the extremes and adhere to the Middle Path is India’s message to the world.

Inhaling the Mahatma is a good read, but I am not sure if those familiar with the India of the 1990s and the early 2000s would find it very exciting. But, if you are a tourist or a visitor and are enthused enough by your brief visit to know more about the ‘wonder that is India’ (with apologies to A.L. Basham), check this out for a return flight read.

(Sanjaya Baru is a media advisor to the prime minister.)

"It's Between Them, I Don't Mind Ash Working"