Will the ballots of democracy really hold up against the bullets of insurgency? Outlook's primer on the January 30 elections in Iraq. Updates 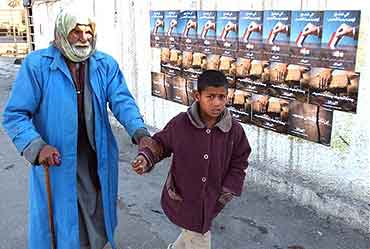 The world holds its breath as Iraqis put their lives on the line for the first free vote their war-torn nation has ever known—even if in a relative way. But will the ballots of democracy really hold up against the bullets of insurgency? Here's Outlook's primer on the January 30 elections in Iraq.

What is this election all about?
Creating an entirely new government for Iraq, starting with a 275-seat transitional national assembly. Whoever assumes power will have the crucial task of holding the country together as it goes about writing a new constitution, carving in stone the final political system for post-Saddam Iraq. It then proceeds to another election, under whatever system of governance the constitution prescribes.

Who is running for office?
Everybody and his dog. A dizzying 111 different slates (see Road to Democracy) of political parties, coalitions and independent candidates are on the ballot. But the field is led by large-bloc coalitions that reflect Iraq's sectarian and religious divisions. Parties representing Shi'ite Arabs, who...