And God Save The Messiah

Five years ago, Outlook went out on a limb to predict Modi's electoral demise—and got it spectacularly wrong. This December, many more are betting on such an outcome. Can aura and oratory carry him through again? 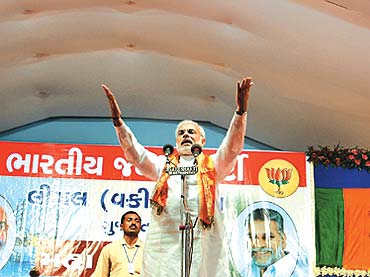 outlookindia.com
-0001-11-30T00:00:00+05:53
Listening carefully to Chief Minister Narendra Modi, one could be forgiven for thinking that the Republic of Gujarat has declared war on what he calls the "Delhi Sultanate". The one that issues "fatwas" against Gujarat. Gujarat does not spread its hands before the Delhi Sultanate. The treasury of Gujarat has so much money that he (Modi) has locked it up so no one can touch a rupee that is meant for the welfare of the people of Gujarat. Modi is the chaukidar, not the ruler of Gujarat. He is the guardian of Gujarat's great prosperity. Gujarat is great, Delhi's rulers jealous and petty.

Whatever else he may lack in, it's certainly not any skill in oratory. When The Man speaks, the urban middle-class Gujarati gathered there listens, enthralled. The speaker preceding him has just finished describing him as "hamara mard mukhya mantri" (our he-man chief minister). And Modi enters the stage, playing the part to the hilt, entertaining and exciting his audience with consummate artistry. He throws a challenge—"Let there be a contest between Delhi and Gujarat"—and the crowd roars. "I tell Delhi don't take a rupee from Gujarat and Gujarat will not take a rupee from you." Applause greets each outlandish claim he makes: the great spread of irrigation and electricity in Gujarat, of his state having the highest growth rate in Asia, and more in a similar vein.

Sure, unflappable, confident—Modi appears all this and more. But look a little closer, and you may see cracks on the hard veneer. You can fool some people sometimes, but not all people all the time. Many of his claims have been exposed as plain hyperbole. Spread of irrigation and electricity? One only has to talk to Kanubhai Parmal, a local landlord in a village in the rural hinterland far removed from Gandhinagar. All the farmers here, he says, are angry because of the shortage of water and power. "We used to get power for 14 hours. It has now gone down to eight hours. What upsets us even more is that the Modi government has thrown thousands of farmers in jail for power theft. I personally know 25 such farmers." Development? Asks a young farmer in neighbouring Godavari village: "What is this vikas Modi talks of? How does a kite festival, desert festival or navratra festival help us?" They voted for the BJP in the last elections because of the Godhra incident, adds another young man. This time, says he, many will switch to the Congress.

But it's in Saurashtra and central Gujarat where a real storm is brewing. In villages across Saurashtra, they are complaining. Like in Surendranagar district, gateway to the region, where farmers are in distress because of the poor crop of Bt Cotton. Or in central Gujarat, heart of the worst rioting in 2002. An erstwhile tribal stronghold of the Congress, the region went with Modi in Godhra's gory aftermath. But as they languish in jails for their role in the riots, and Modi having forgotten about them, the tribals think they might now return to the Congress fold. 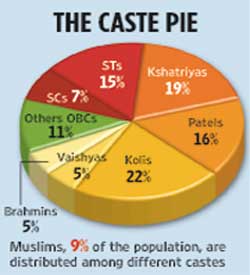 And farmers and tribals aren't the only ones unhappy with Modi. The Patel and Koli communities have their own set of grievances against the CM. What's more, Modi has also rubbed the VHP and RSS the wrong way. Both organisations have made it public that they won't campaign for him; in fact, some of them will work for the rebels. The sants too have turned against him, many of them who supported him in 2002 are now campaigning against him. The BJP's farmer wing in the state—the Bharatiya Kisan Sangh—has also made it known that it is willing to campaign for the Congress.

If there is support for Modi, it is in urban Gujarat, where he seems to have a cult following. Strangely, no one believes in his invincibility more than those who have suffered under the Modi regime or opposed him strongly. Says Gagan Sethi, an activist who continues to work among displaced Muslims, "We may make Modi the villain and feel nice about it. But we have to accept that he has addressed that underbelly of Gujarati Hindu society that remains deeply anti-Muslim. Modi has created his own cadre that is loyal to the leader." Political analyst Achyut Yagnik calls it 'Moditva', and says, "I agree that Modi's popularity is coming down in rural areas. But I am not yet certain whether the Congress will be able to exploit this." For, as people keep repeating in the cities, "Gujarat has a high rate of urbanisation of close to 40 per cent." 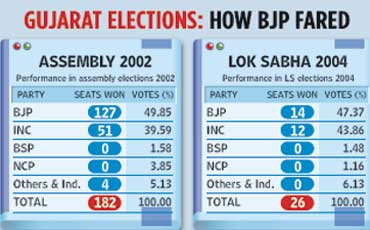 Playing spoilers for Modi are the BJP dissidents, Saurashtra and central Gujarat. In '02, the BJP had romped home with a whopping 127 seats in the 182-member Gujarat assembly, making its presence felt in every region of the state. Circa 2007, if the Congress makes gains in the crucial regions of Saurashtra and central Gujarat, with their 58 and 46 seats respectively, and mops up anti-incumbency votes in other parts of the state, it can be within striking distance of the half-way mark of 91.

It is exactly in this belt where BJP rebel leaders, particularly those who have been forced to abandon the saffron side because of him, are working in tandem with the Congress to bring Modi down. They mince no words when it comes to disowning the chief minister. Says Somabhai Patel, MP from Surendranagar and the sole one from the Koli community in the state, "After 47 years in the Jan Sangh, BJP and VHP, I am now working with the Congress. Still the BJP does not have the guts to expel me. Modi won in 2002 because of the Godhra kaand. But this time he will be exposed as a fake Hindu. In every speech I say that this man who talks of women's welfare could not even look after his own wife whose existence he denies. He is not a normal human being. I say keep even extra women but don't abandon your own wife."

Meanwhile, the Congress is working hard to patch up a formidable alliance against Modi. An array of central leaders has been given charge of different regions of Gujarat. Party general secretary Digvijay Singh, for instance, is in charge of central Gujarat, trying to woo back the tribal voters they lost in the last election. Sonia addressed a huge Congress rally, Modi promptly followed it up with the announcement of a special scheme for tribals. But as Bharatsinh Solanki, state Congress president, said: "People don't realise we've been having meetings and camps to build up a base of workers, and the model we've followed is that of the RSS. While we've been building a network in backward areas away from urban centres where Modi is popular, he has been dismantling the RSS structure." 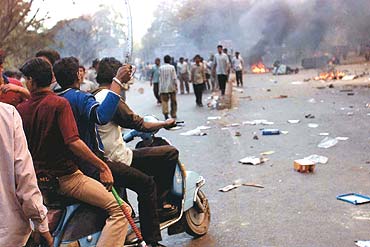 Feb 28, ’02 When man turned beast on the streets of Gujarat

The Congress is also clear that it will not make this an election about Hindu-Muslim issues because that means playing into Modi's hands. Hence the muted response to the Tehelka sting operation. The party wants to fight this election on arithmetic and anti-incumbency. The strategy involves giving tickets to several rebels from the BJP, particularly in the Saurashtra belt. The anti-Modi Hindu hardliners who they can't accommodate will fight on Uma Bharati's party symbol, to create even a small divide among the disgruntled parivar members.

Whether all this will be enough to defeat Modi will become clear only once the candidates are announced later this month and when the election really picks momentum towards end-November. What is clear, though, is that this will not be a one-sided battle. Even Hindu hardliners-turned-rebels like Gordhan Zadaphia say that "Sonia's acceptability among tribals and women is going up. She will be the most important campaigner for the Congress". Every meeting she has addressed has drawn huge crowds. On November 3, the Congress hopes to answer Modi's overt wooing of women voters with a huge women's rally to be addressed by Sonia. If the Congress does indeed get its candidate selection right, is able to tackle the infighting among its leaders in north Gujarat, and if Modi fails to generate any 'Hindu' sentiment, then the formidable strongman of Gujarat could be in trouble. And a defeat would mean a bleak future ahead of him since people in the national BJP and larger Sangh parivar do not really like or trust the man, even though they know that a victory for him is critical to the party's national survival. If he does make it through, it would be without much help from the RSS or VHP, which too has implications for the future of the BJP.

A Congress victory in Gujarat, on the other hand, will also give the party the courage to face a national election and retain Muslim support across India. That is perhaps the biggest irony of Gujarat politics—Congress must not overtly support Muslims in order to play a full innings with the majority electorate. If it succeeds in defeating Modi, Muslims across the land will forgive the party its many shortcomings. As Afzal Memon, a leading Ahmedabad-based businessman, puts it, "Here, we do not aspire to any political party helping us. We just don't want anyone to damage us."

Where does all this leave Modi? The Tehelka tapes have certainly put paid to his national ambitions. He has no choice but to limit his politics to Gujarat where he appears to have staked everything on himself. Defeat here is something Modi just cannot afford. He has made too many enemies whom he can browbeat only with the stick of power. Defeat would mean the end of his political career and the beginning of many legal wrangles.